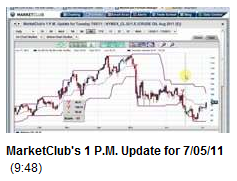 Hello traders everywhere.  Adam Hewison here, co-founder of MarketClub, with your 1 p.m. market update for Tuesday the 5th of July.

The big story today has to be the moves in both crude oil and precious metals. Both of these markets have made strong upward moves. The crude oil dump of 30 million barrels is history and it underscores just how little influence anyone has over what is arguably the most precious commodity for any industrialized country.

Is it just me or is there a whole lot of smoke and mirrors going on in the political/financial world today. It seems that politicians continue to kick the can down the road when no politician either here in the states or anywhere else for that matter wants to say there is no more money!

Is there a chance that Germany wants out of the euro? I believe there is. I also think that German citizens will ultimately become enraged at having to bail out weaker countries like Greece, Spain, Portugal. France of course has a huge risk as they have the most exposure to Greece.

I believe the politicians are trying to protect the banks and their jobs at the same time. In any normal situation banks just don't keep lending more and more money to anyone to pay back previous loans. It makes no economic sense. So I'm going to say what the politicians will not say, and that is that the king has no clothes; only in this case the system(s) are broke.

Okay so let's see how we can protect and make your money grow.

Let's take a look at today's markets. Click here to watch the video!

S&P 500: +90. The S&P 500 has rallied sharply from an oversold condition and from the bottom levels of the Donchian trade channel. This market should run into resistance around the $1,340 level. I would be surprised to see this market breeze over this level, given the fact that it is now overbought. Resistance at $1,340. Support at $1,300.

Silver: -55. While today's market rally is impressive, it is still not clearly out of a trading range. As we spoke about the bullish divergence and the fact that this market was oversold and at the lower end of the Donchian trade channel; it is not surprising to see this market rally today. It is becoming more and more likely that the silver market is building an energy base to move higher.

Gold: -60. The major support level $1,480 that we outlined in my previous update on 7/01 held the market last week. A bullish divergence is in place, and we continue to believe that this market is creating a massive energy field to move higher later in the quarter. Resistance should come into this market between $1,510 and $1,514.

Crude Oil: -55. The bounce that we have seen in the crude oil market was from important Fibonacci retracement level. The bullish engulfing line on the weekly chart will be confirmed if this market closes higher for the week and in a positive mode. Intermediate term traders should be out of this market at the moment. Look for resistance around the $100 a barrel level.

The Dollar Index: -90. This index is oversold and at the lower end of the Donchian trade channel. We would not be surprised to see further upside activity in this index. Our longer-term indicators remain negative, however. Look for resistance between $75 and $76.

Thomson Reuters/Jefferies CRB Commodity Index: -55. As the price of oil goes, so goes this index. This index is at a 12 day high and looks ready to test the $350 resistance area. We feel it's inevitable that inflation will once again kick in to the world's economy, driving up interest rates and the cost of raw goods. This index is an excellent index to watch, as it is a much truer picture of what's going on inflation wise. The US government's indicators do not include food and energy which we all use and need. The trade triangles remain negative on this index at the moment.