The FOMC announced that Operation Twist would continue through year end.  This is where the Fed tries to re-inflate the housing bubble (and related areas) by buying long term T bonds to artificially hold down long term interest rates while sopping up any inflationary implications to the money supply by selling short term T bonds.  Throw in a side of ZIRP, and you've got a lot of free money flying around out there with very subdued inflation effects.

Gold is in an orderly corrective consolidation.  Silver has been hanging around at support and is sponsored by a bullish CoT structure.  Commodities, even backing out the wildcards in agriculture, are in nice short-term bottoming patterns (copper is rounding upward and crude oil is breaking up from a small Inverted H&S with a target around 98) and just waiting for the Fed to lose control of the nice macro painting it has been working on since Op/Twist #1, back in September of 2011. 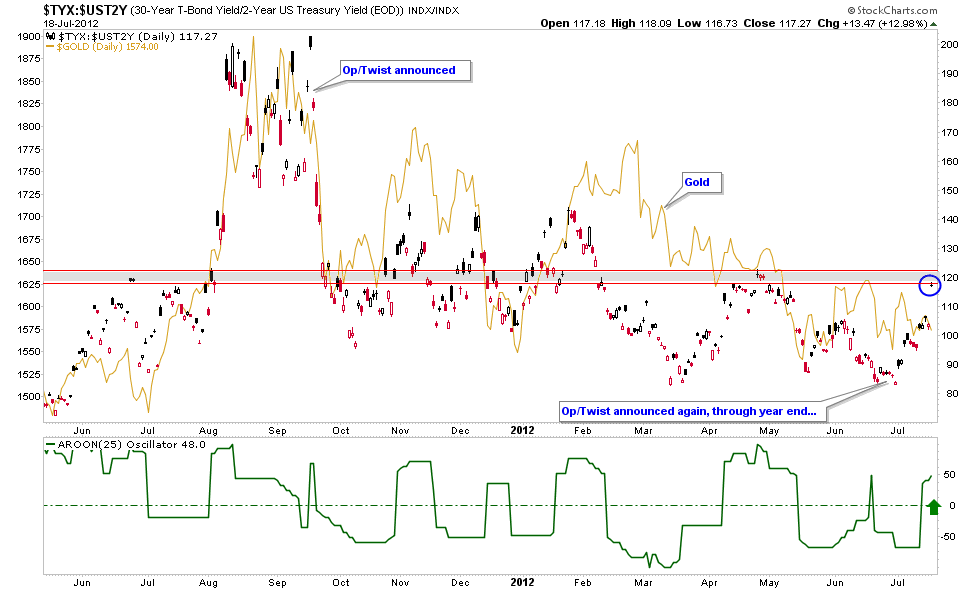 Since the FOMC's most recent announcement, the 30.2 yield spread (30 year/2 year ratio) has gone upward right along with commodities.  Now, does this imply that the Fed has lost control and we are finally going to see some inflationary expectations anxiety?  Unfortunately, no.  30.2 has simply reacted with the relief in commodities.  Maybe the Fed is just letting it breathe in a natural way before taking manipulative action once again.

Gold certainly does not seem to think a release of inflationary endorphins is directly forthcoming.  When might this condition change?  Well, let's see 30.2 get through the resistance area noted on the above daily chart before even thinking of a lasting trend change. 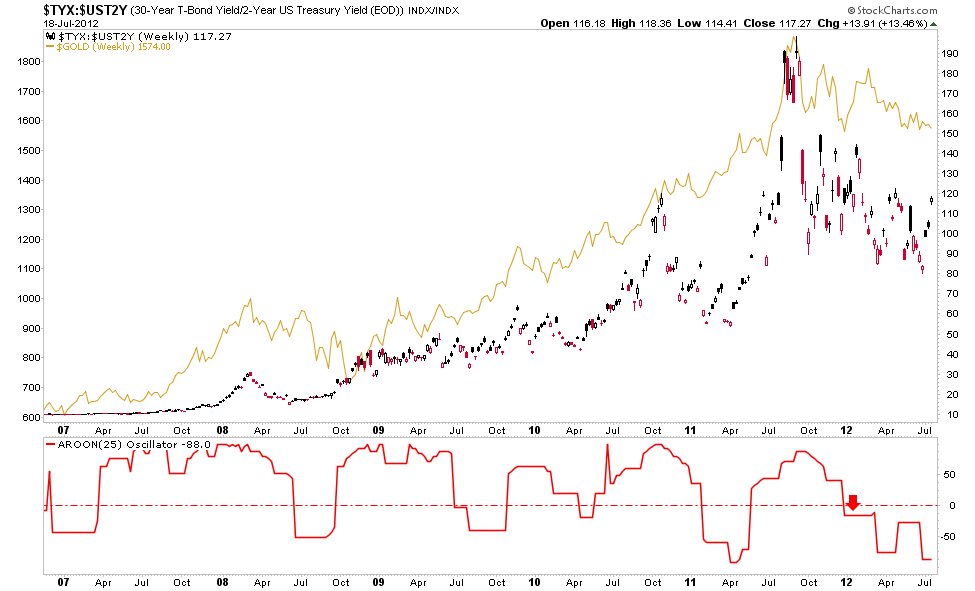 A weekly version of the chart shows the 30.2 and gold firmly locked in downtrends.  As long as the Federal Reserve is able to conduct yield curve operations to its liking, there will be no apparent inflationary implication to casual (read: most) observers.  But the facts are...

'Yes, we know that Gary'.   Well I know you know.  But as market participants we have got to factor the above because it is only critical to just about everything.  Buy or sell stock markets, commodities, gold, silver, T bonds?  Factor in the powerful force at work in the bond market.  Factor in its agenda, its supply of ammo (short term T bonds for sale).

I will not pretend that this operation has not messed with the tools with which I go about managing markets.  It has.  It is hard to know what to believe and what to discount.  Speaking for one asset - the monetary stress barometer, gold - we note that its chart structure is a consolidation, not a blow off top.  In other words, it looks like something that is in waiting.

Meanwhile, the chief operator at the most powerful manipulative agency in the world is sitting pretty:

“that’ll be the last time you people publicly lynch me with your helicopter jokes and inflation hysteria; how you like me now suckas?”

As we work through the process of sorting out the timing in which the market's more natural forces come back into play, you are invited to check out the free - and spam free - eLetter and of course, this blog.