The USDA will release the August WASDE tomorrow at 7:30 AM CDT. We are expecting cuts in yield and production for Corn and Soybeans. We are also expecting draws on the global wheat supply.

While many analysts are expecting the USDA to cut yields, production and stocks in this WASDE report, prices will not automatically rally. The market has already priced in the expectations of production cuts. Therefore, it is very important to know the market expectations for the report tomorrow. If the cuts are greater than what the market expects, prices should rally. If cuts are less than what the market expects, prices should decline. If the report comes in as expected, the WASDE could be a non-event in the Grain Markets.
1) CORN

If you are looking to speculate ahead of the report, I suggest looking at the weekly corn options. The August Weekly that expire at the close on August 10th (Week 2 Options) are perfect for a one day WASDE trade.

Option Calendar Spread: Buy 2 August Corn Week 2 $8.20 Calls and sell 1 September Corn $8.20 call for even money. If the market shoots higher on the report, the first weekly call cancels out the short September 8.20 call option, giving you a free 8.20 weekly call that would act like a futures contract. If the market is limit down, the weekly calls are worthless and the September Call should lose most of it’s value, making this about a free trade if we are complete wrong about the direction of the report.
STRATEGIES USING COMBINATIONS OF POSITIONS, SUCH AS SPREAD AND STRADDLE POSITIONS MAY BE AS RISKY AS TAKING A SIMPLE LONG OR SHORT POSITION.

So what is the catch? The biggest risk on this strategy is if the market does nothing after the report. The weekly calls will be worthless with no move higher and you will be short an $8.20 call in Sept that has lost some of it’s value but it will take about 25 cents to buy it back (that is my estimate).

If you think the report will be bearish, you can do the same thing for the puts and buy two August Week 2 $8.00 Puts and sell the September $8.00 Put for about even money also.

AND AT THE SAME TIME:

If the market is limit down: Call spread will be close to worthless (and since you did it at even money it was a free trade to begin with). The Put Spread will be a winner because the first week 2 put will help offset the short sept put, leaving you with a free weekly put that will act like a futures contract.

If market is limit up: Put spread will be close to worthless (and since you did it at even money it was a free trade to begin with). The Call Spread will be a winner because the first week 2 call will help offset the short sept call, leaving you with a free weekly call that will act like a futures contract.

If the WASDE is a non-event: Prices stay the same and the weeklies are worthless. You are short the 820 call and the 800 put. At least one of the options will expire worthless. If the report is a non-event, the options will also lose a good bit of volatility premium too. It might take 40 cents to buy back the options, but if you can wait it out and let the premium come off, we could finish out of the money for both options. 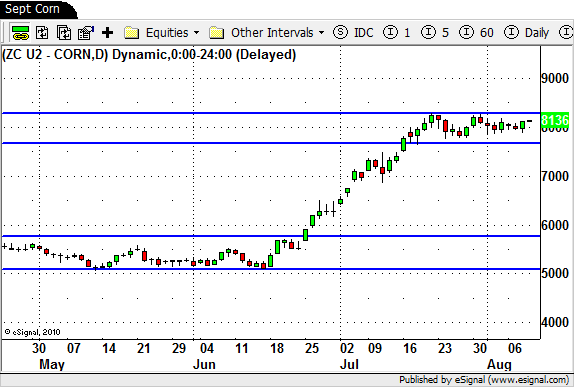 Below is the table for the Soybean WASDE estimates from the latest Reuters poll. I usually go by the average estimate to set expectations for what the market is looking for when the WASDE is released.

I think the averages are too high but the USDA tends to be conservative with their reports. Thus, it is likely that yield and production will be cut less than is expected. If we get a 36.5 yield or lower I think we could be limit up. A 38.0 or higher yield would be seen as bearish.

Just with corn, I like the weekly options for Soybeans. The August Week 2 options expire on Friday at the close and they are based on the September Soybean futures contract.

Bullish Strategy: Buy two August Week 2 Soybean 1600 Calls and Sell one September Soybeans 1600 Call at even money or better. If we are limit up, the first Week1 Soybean 1600 Call will help offset most if not all of the loss on the short September 1600 call. The 2nd week 2 option will act like a futures contract. The max risk is if the report is a non-event, the weekly options expire worthless, and we have to buy back the short sept call for 30 to 35 cents. You would rather be limit down and have the whole trade be worthless than to have a non-event and have to buy back the short sept option.

Bearish Strategy: Buy two August Week 2 Soybean 1600 Puts and sell one September Soybean 1600 Put at even money or better. Best case scenario is we are limit down. The short Sept put will offset with one of the August puts, leaving us with a free August put that will act like a futures contract. Next best scenario is we are limit up and the position is worthless, making this a free trade, save commissions and fees. Worst case scenario is nothing happens after the report. The weeklies expire worthless and we have to buy back the short puts, which would probably be worth about 35 cents. 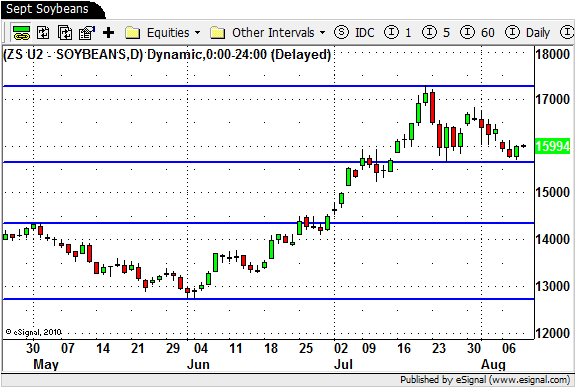 The wheat harvest is complete so we will focus on the total wheat on hand in the US and Global Stocks. I have a feeling the world and the US will be using more wheat for feed to substitute for high priced corn and soybean meal. Don’t be surprised if the WASDE is bullish for wheat tomorrow due to a draw on supplies. 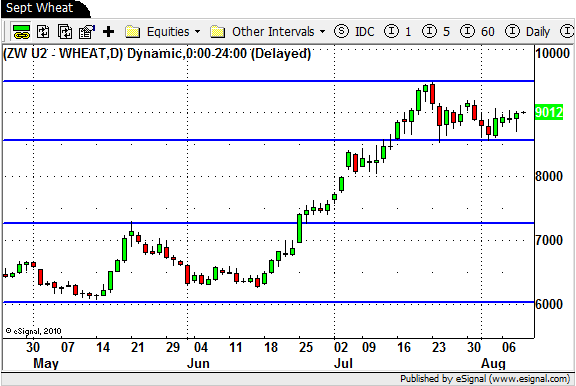 Turner’s Take was created to give traders and investors a window into the elusive world of LaSalle and Wall Street. Turner’s Take includes an in-depth analysis of the markets, trade recommendations, and access to Turner’s Technical Trading Systems. Subscribe to the Turner’s Take Newsletter!