Before we rush into the pressing news about Hurricane Sandy and the closing of Wall Street today, let us quickly review a bit of the global news from last week. The week began with some promising news from China that suggested it was not in for as hard of a landing as many had previously suggested. We also saw a very surprising and positive GDP report from the UK. Next, the United States FOMC announcement was in line with its mediocre expectations, as economists expected few changes in policy ahead of the Presidential Election. The FED’s stance remained supportive, but the overall commitment was unchanged from the prior meeting. Despite an improvement in the US GDP report, the US markets remained pressured during a poor week of reported earnings and a circulating rumor that Fitch may look to cut ratings from AAA.

We begin this week with the US Dollar trading at the higher end of this month’s range as traders turn to the relative safety of the greenback. This does not bode well for Gold as a stronger Dollar dampens the appeal of Precious Metals as an alternative asset and makes commodities more expensive for holders of other Currencies. On top of the “flight-to-safety” bid in the Dollar, there are continued concerns in Europe surrounding Spain and Greece. Despite Spain’s continued economic disasters, they still have not requested the needed bailout from the ECB, which would entail a large scale bond purchase that would lessen future borrowing costs. Greece also remains in question as reports change daily on when the Greek Troika Report will be complete.

Despite a safety bid in the US Dollar, continued concerns in Europe, and an expected light volume trading environment, there are a few standouts that will keep Commodity bears on guard. First, we continue to hear that Japan will extend their Monetary Easing Policy early this week. The market will also hear from two ECB Representatives concerning Europe in the first two days of the trading week.  We have all seen how supportive news during a scheduled report can influence the trade. And lastly, technical indicators in the Gold (see chart) are showing prices right in the middle of the support and resistance trendlines (arrows 1 and 2) that the futures have obeyed since failing at $1800 on October 4th. This channel identifies a strong support around $1680 which will also fill a prior GAP on the chart (arrow 3) and resistance around $1730 for the week. Also, I mentioned last week that the 50 day moving average crossed over the 200 day moving average (Golden Cross identified by arrow 4) which is usually seen as a supportive technical indicator.

In the early part of this week, pay close attention to the direction of the US Dollar and the Euro as they both hold key support and resistance levels. If there is no supportive news from ECB Representatives, and traders continue to run to the Dollar for safe haven in this light volume trade, then the Gold will remain under pressure. If we hear language that supports the Euro, then the Dollar would be expected to drift lower from the October highs, and a bid would return to the Gold. There is also a very important Non-Farm Payroll report that should carry quite a bit of weight at the end of the week. This will be the final employment number in the US before the Presidential Elections.

Overall, this week will be very important for traders everywhere to pay close attention to trade volumes, along with technical levels. When the pit traded sessions are closed in the United States, markets are expected to stay rangy and quiet. But lighter volumes also leave markets vulnerable to extended rallies or drops if technical support and resistance levels are violated. I expect the Gold futures to pay very close attention to the US Dollar and will trade inversely of its direction throughout this week. 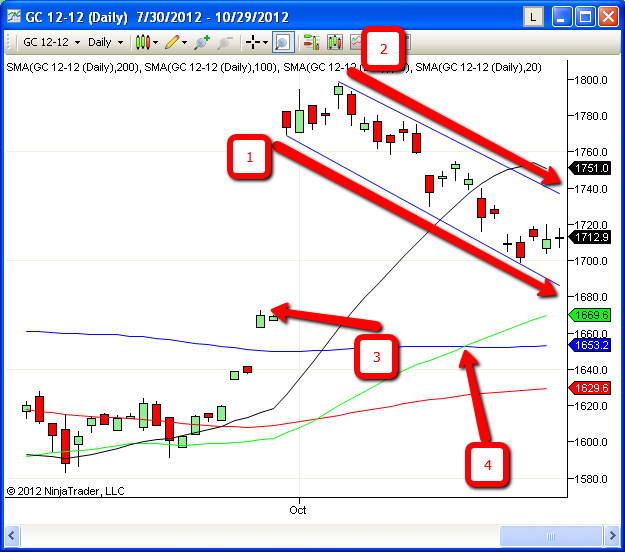 Good luck this week and as always, please feel free to call or email my office with any questions or comments regarding this piece. Also, please keep in mind that Long Leaf Trading is offering lowered commission rates on all new accounts opened in the month of October. This applies to all new accounts, whether Gold is the focus or not. Please contact Brian Booth directly by phone at (888) 272-6926 or by email at [email protected]

One thought on “Gold Chart of the Week”