Behold the beauty of this title: Investors Most Optimistic on Stocks in 3-1/2 Years in Poll

I was reviewing this morning’s news items the above headline stuck out like a sore thumb.

A little stroll down memory lane:

In May of 2012 NFTRH 188 used this graph among other indicators to get bullish on a risk vs. reward basis, stating “and then there is this beauty… the dumb money has lurched hard to ‘risk off’. 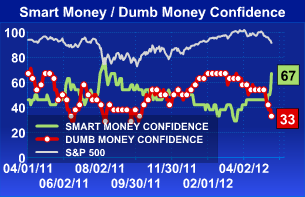 I personally took some pretty good grief for writing Dumb Money Sold in May and Went Away over at Contrary Indicator Central – AKA the Seeking Alpha comments system – to the version of the article published at SA.  The most memorable of the responses by defensive bears was “Gary = Dumb Investor”.  I considered these comments to be of great value, because to be an effective contrary market player you must, almost by definition, appear dumb to most people a lot of the time.

This bullish orientation, although very difficult to maintain during last summer’s volatile ups and downs extended through year-end, with another personal watershed sentiment anecdote coming at Thanksgiving, when an extended family member and CFA advised that all the best fund managers he dealt with were mostly in cash and expecting a Fiscal Cliff-related market crash in December.

Here is the current state of sentiment (both graphs courtesy of Sentimentrader.com): 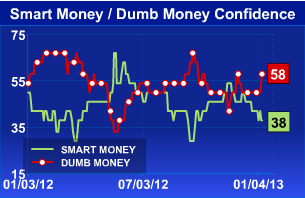 We have ended the bullish risk vs. reward regime, although the model portfolio continues to hold some global bull positions.  It is obvious that confidence is being restored and those same fund managers are now chasing the broad US stock market higher.

This is of course a recipe for near term destruction of bears who are actively positioned against the market because right now, momentum and a heck of a lot of dumb, greedy money are propelling it higher, with all sorts of happy media stories providing a tail wind.  That is the short-term.

Longer term, especially considering that the current sentiment structure has degraded significantly (from a contrarian view) and that long-term Treasury yields are likely to rise with asset markets, this momentum should burn itself out before too long.

A long-standing potential target for the S&P 500 is 1550, and this could extend up to new all time highs above 1576.  Yet still, the market is very bearish on a risk vs. reward basis. 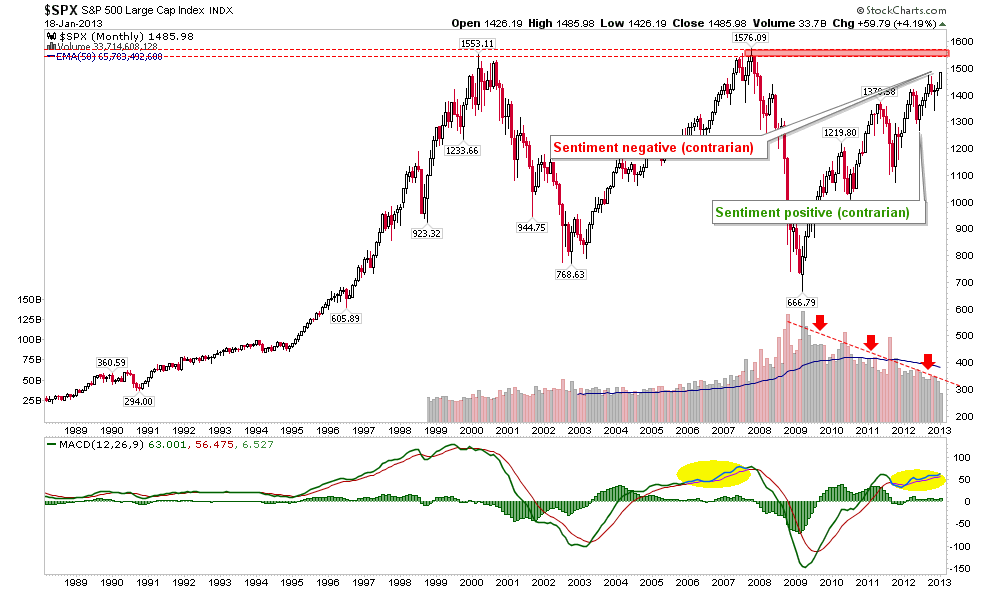 Yet I am not so much talking about the proximity to a potential triple top, the state of the monthly MACD or any other technical signs when offering a bearish view for 2013.  I am talking about human herding behavior; not among NFTRH subscribers or readers of this site.  Nor am I talking about the readers of some websites that may publish this article.

But think about the great investment and fund manager herd out there under pressure to invest OPM (other peoples’ money).  Think about the Goldilocks backdrop that has taken center stage now that we’ve gotten through the Fiscal Cliff non-event.  The backdrop comes complete with a rolled over Federal Reserve, continuing to promote inflationary policy with few signs of inflation, which are always lagging to the public.

'It's a new and great contrarian phase of bullishness!' thinks the investment management herd as the financial media that so reinforced bearish perceptions in 2012 goes the other way toward full perceptions-reinforcing bull horn mode.

The new story that the mainstream seems to be pumping is that the VIX (what some people call the fear gauge) is no longer relevant.  Well it was pretty relevant at each of the last three spikes.  Although notably, VIX has broken a support level here.  If it remains below that level, the trudge toward an actively bearish stance against the market could be long and tedious, just as the white knuckled bull stance was last spring and summer.

The bottom line is that sentiment is very definitely aligned in a bearish risk vs. reward structure now.  But this condition can endure and people who are invested should at least be aware that the backdrop is becoming unhealthy in its over bullishness.  It is possible that a good interim correction will come along and clean up the sentiment backdrop.  In that event we will be open to a more bullish 2013, if other components of the analysis indicate a positive view.

But the longer the current situation remains as is, the more dangerous the market becomes with the likelihood that the next correction could be severe at best, or more likely the end of the cyclical bull market and start of a new bear.  So move forward aware of the current sentiment backdrop.  It’s mirror image worked out last year.

One thought on “Ding, Ding, Ding?”