Seeking Alpha has only 3 entries under the ‘Gold & Precious Metals’ section of its most recent ‘Macro View’ email notice:

To be fair, the second article highlights lower near-term targets prior to a rally to $60+ and this brings me to my point; silver is in a bear flag.  I too am bullish on Ag and Au in 2013, but the charts are the charts and silver’s daily chart targets 27-28 first, which we have been noting in the newsletter despite a recent change to a bullish risk vs. reward stance on the precious metals complex. 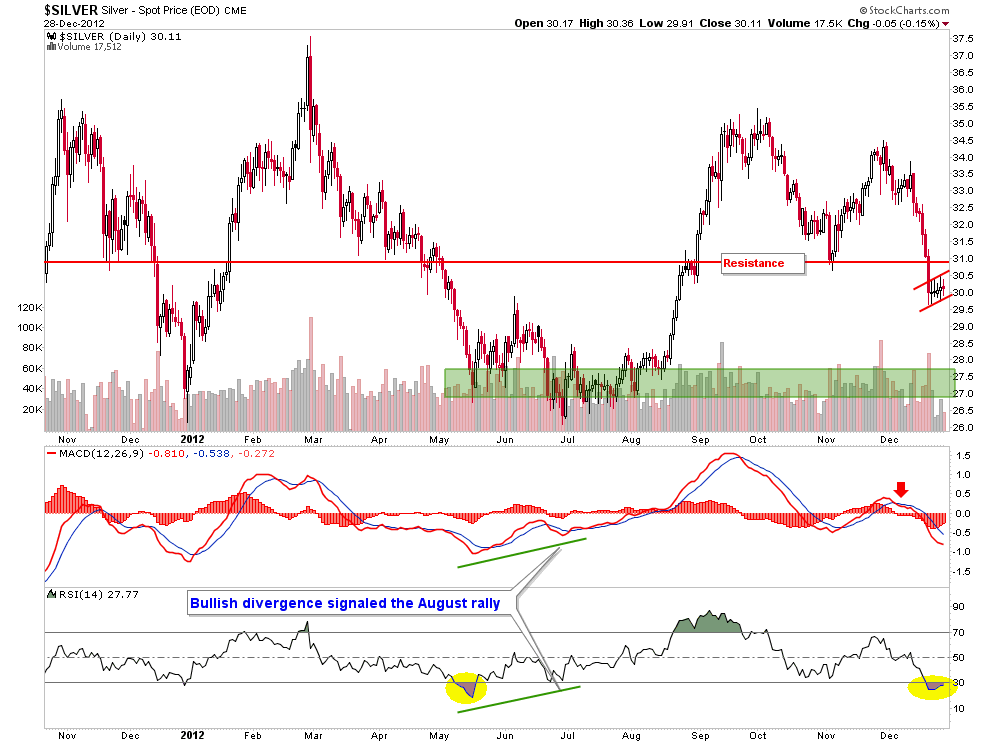 Bullish risk vs. reward (meaning gold and silver have notably more upside potential than downside risk) is one thing and short-term technicals are another.  The short-term technicals say to be ready for a lame rise to the noted resistance level (31 had been important support before its failure) and the potential for a renewed decline to strong support in the 27 to 28 range.

I am sure the above noted articles are not the only three out there.  When the silver bugs are beating the drum loudly and the technicals are not yet in line, it always pays to be cautious in the near term.

On the bigger picture using the weekly chart for example, silver’s technicals look fine.  But that should include the potential for a drop to the mid-high 20′s because despite a bullish macro fundamental view and even longer-term technical view, the recent correction is not yet indicated to be over.

What might we look for?  A final, dispiriting decline with sentiment bottomed out and the CoT structure going to a full bullish structure (it is moving in the right direction) and some positive technical divergence (like that noted on the chart from last summer) would be an excellent setup.

And if I am being too bearish on the short-term, we’ll know soon enough with a sustained rise above the noted resistance area at 31, which also includes the 200 day simple moving average (solid red line).

Just a word of caution and perspective from your friends at biiwii.com.

10 thoughts on “Silver is in a Bear Flag”