Despite the strange, absurd sense of normalcy that has somehow prevailed this week, the world is witnessing a horrifying, slow-motion bank robbery in progress. With hostages…lots of ‘em. Or maybe you could say it’s a financial train wreck? However you describe it, it is absolutely revolting in every sense of the word.

By now, you are probably well aware of the inexplicable, sordid details of this state-sponsored attack on the rule of law and confiscation of private property, so I won’t go into great detail about it, but I must say that I am still shaking my head in shock (and disgust) at what the unelected, non-accountable bureaucrats have unleashed upon the world.

Many optimists, like ostriches, have their heads buried deep in the sand (or up their…) somehow of the belief that this event is a non-issue and so minor in scope that it ultimately poses no danger to the Euro currency, let alone the Great Economic (Stock Market) Recovery here in the United States.

I see this ridiculous response simply as stubborn denial and ignorance: an unwillingness to fully grasp what a radical path has now been taken - one with disaster written all over it for the Euro currency and for the prospects of economic recoveries around the world.

One of the more colorful commentaries I read was that of a European bank CEO, who couldn’t believe what the Troika had done, calling it “a paradigm shift…fundamental breach of property rights…full-blown Socialism.” (Lars Seier Christensen, CEO Saxo Bank).

We’ve crossed the Rubicon…Akin to the Assassination of Austrian Archduke Francis Ferdinand in 1914. These are not statements that can easily be dismissed and may prove to be highly accurate in the long run.

Strangely, most markets have largely shrugged this off (for the time being) - Gold & Silver certainly didn’t scream higher on the chaos as many would have expected. There was no furious funneling of safe-haven asset flows out of risk markets into Precious Metals - at least not yet…

I think this is largely because governments and media have the unique ability to create a false narrative of perception, an illusion of calm and serenity so long as the streets in Cyprus and ATM lines remain relatively under control. But that can change in a flash - the very instant once photos and videos of angry rioters start to flood the airwaves, internet, newspapers, and mobile devices across the globe.

The Heavy Metals, Hard Currencies did catch a brief bid as short-covering fueled a break north of $1600 in Gold and $29 in Silver as detailed reports hit the wires earlier in the week, but I think they’re just marking time ahead of the real fireworks to come.

The reality is that nobody knows how things will go from here. We’ve only just begun: Pandora’s Box has been flung wide open and we’ll have to face the consequences ahead. We’re in the first stages of really understanding what these events mean and how they will ultimately play out. We’ll only start to get a deeper understanding Sunday night and early next week, so stay tuned and be prepared for extreme volatility.

The Troika has aimed and fired their bazooka at lowly bank depositors who were dumb enough to believe their bank deposits were safe and insured against theft. One potential unintended consequence could ultimately be the very destruction of that which they so desperately wish to preserve: the Euro currency in its current form. 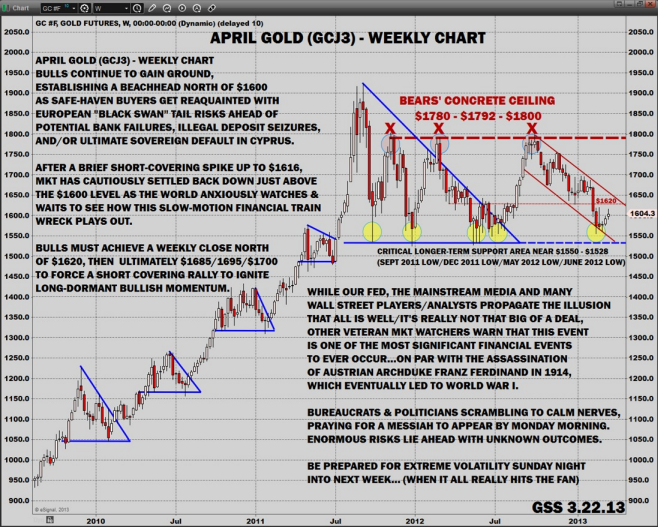 "Just as there was no turning back for Julius Caesar’s army’s after crossing the river Rubicon, if the European Union breaks its promise on deposit insurance, it too will pass a point of no return for depositors. In this case, future promises of a ‘government guarantee’ won’t be worth the paper they are printed on."
— David Franklin, CEO of Sprott Private Wealth (March 18, 2013)

This is a sample of the analysis from my weekly precious metals market commentary newsletter, The Gold & Silver Speculator. Register now to receive the most relevant investment information and trading tools to participate in the gold and silver markets!

4 thoughts on “The Gold & Silver Speculator”