Whenever I'm faced with a major change in my opinion regarding the market's long-term direction, I think of the English punk band the Clash.

In particular, the 1980s hit "Should I Stay or Should I Go" comes to mind. With apologies to the song's writers:

"Should I buy or should I sell? If I buy, there will be trouble / If I sell, it will be double."

Thinking of these altered lyrics might be a nod to being obsessed with music during my adolescence. It might also be a signal that it's time to make a change. I like to think of them as the latter.

Over the past week, I thought of those lyrics when looking at the price of gold. Regular StreetAuthority readers will remember my April 29 article on the precious metal. I had forecast that gold would drop below $1,200 an ounce before bouncing higher. This is exactly what has occurred with gold futures dropping to $1,179 prior to bouncing into the $1,250 range seven sessions later.

This has led me to turn bullish on the yellow metal. My bold call is that gold will climb back above $1,400 an ounce prior to it dropping below $1,150. Here's why: 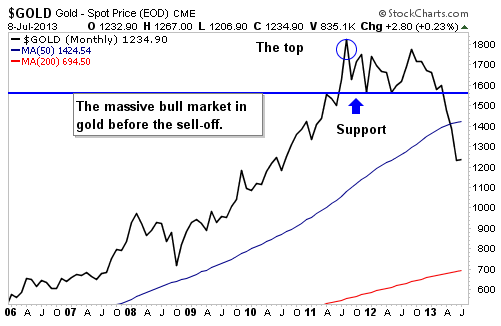 The Options Market
Trading volume in call options on SPDR Gold Trust ETF (NYSE: GLD) have just soared to its highest level in over eight weeks.

Call options are bets that the underlying security or commodity will increase in value. A sharp volume increase in call options can signal that professional traders are expecting additional upside in the commodity. Remember, this is despite the rising short interest in the precious metal.

Short Interest
Whenever short interest reaches an extreme level, it can be a signal that the commodity or security is oversold and ready for a bounce higher. Presently, short interest in the SPDR Gold Trust ETF is about two standard deviations higher than average.

In addition, COMEX net long positions for large speculators recently plunged to multi-year lows, down 79% from the first of the year and 90% since the summer of 2011. Such a sharp change in positions can often foretell that the opposite move is about to occur. Speculative shorts in the metal have reached such a level that it has become an overly crowded trade.

Lower Prices Increase Demand
Demand around the world is spiking in response to the lower prices. Consumers in Vietnam are flooding stores to purchase gold bullion. Turkey imported 44 metric tons of gold in June, increasing demand in the world's fourth-largest consumer of the precious metal . Not to mention that in the first five months of this year, China's gold imports have already doubled last year's levels.

The Technical Picture
Taking a look at the past 90 days, gold prices have experienced the 16th worst drop since 1968. It has rebounded each of the subsequent 90-day periods, with an average increase of over 20%.

If we take this observation as being predictive, it may signal a bounce into the $1,414 range. In addition, there is a multi-day consolidation zone in the $1,400 area. It is my thinking that this type of consolidation zone can act as a magnet, pulling the price back to that level. The combination of the increase after a 90-day decline with the consolidation zone being in the same relative area paints a compelling technical picture of this bounce continuing higher.

Risks to Consider: Anything can happen in the commodity market. My analysis makes solid sense now, but in light of a variety of factors -- the uncertain worldwide economic environment, the Federal Reserve's lack of clarity on its timing for ending monetary easing measures, interest rates changing, and currency fluctuations among others -- it's very difficult to accurately forecast gold prices. Be sure to always use stops and position size properly whenever entering a speculative long position.

Action to Take: Entering gold now with stops at $1,170 makes both fundamental and technical sense. I expect to see gold back above $1,400 prior to another substantial down wave.

Could You Really Collect $55,000 a Year in Retirement?
Now it's possible thanks to "Retirement Savings Stocks." These high-yielders dish out enough income for you to golf every day... go to Hawaii four times a year... and still have more than enough left over to fund your children's or grandchildren's education. To learn about these exclusive retirement stocks, click here.

7 thoughts on “The Biggest Gold Prediction Of The Year”