Today, I am going to be analyzing the stock of The Walt Disney Company (NYSE:DIS), who reports earnings after the bell today.

Like many of us, I grew up with Mickey and Donald and the rest of the Disney characters. Disney as a company is loved by folks around the world and has a strong brand. That said, the stock can and does have corrections and it may be set for another correction after the earnings come out tonight. The market itself seems to have a little bit of a negative tone, which is indicating to me to be on the sidelines in this stock at the moment.

The recent red weekly Trade Triangle for Disney is the first red flag that the stock may have put in a top. While not as significant a change as a monthly Trade Triangle, it should not be ignored. The second red flag for Disney is the glaring negative divergence between price action (number 6) and the MACD (number 8). This is not a good sign and the divergence could be a warning of an impending drop in this stock. 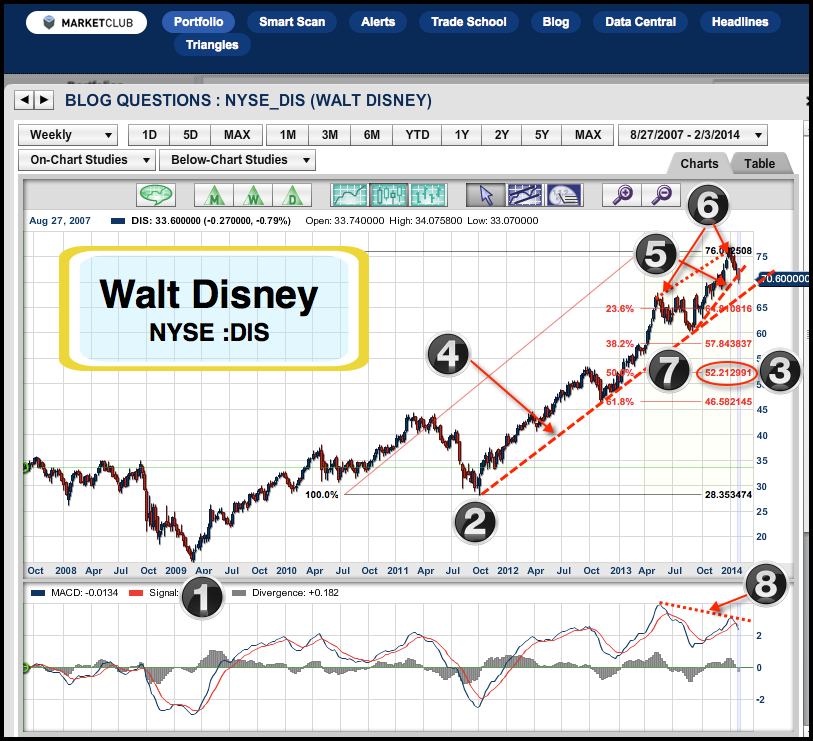 This in-depth analysis of The Walt Disney Company (NYSE:DIS) is not saying that this stock is going to collapse. I am only reporting on certain technical elements that could cause this stock to come under downside pressure.

To summarize, the earnings issued tonight by Disney will have an effect on tomorrow's price action. I expect earnings to come in about as expected or perhaps a little lower. What is of greater importance is going to be the mood of the market. The first trading that takes place in Disney stock on Thursday will more than likely tell the story. If the market is in a negative mode as it approaches the end of the week, it will confirm my outlook and put further pressure on Disney.

Cycle wise, I could see Disney under pressure until the March/April period, based on its 32 month cycle. If that does occur, it will trigger the monthly Trade Triangle. Should that event take place, I would expect to see a move down to the 50% Fibonacci retracement level of $52.21. When and if the monthly Trade Triangle signals a trend change to the downside, I would use the $52.21 level as the first target zone.

One thought on “Will The Force Be With The Walt Disney Company (NYSE:DIS)?”