Hello traders everywhere! Adam Hewison here, President of INO.com and co-creator of MarketClub, with your video update for Wednesday, the 5th of March.

There's no question about it, Ukraine and Putin have been causing havoc in the world’s markets. While it's easy to get emotional and jump on one side of the market or the other because of the news, that really is no way to trade. The Trade Triangles are free of human emotion and tend to keep you in the big trends and alert you to new trends as they develop. 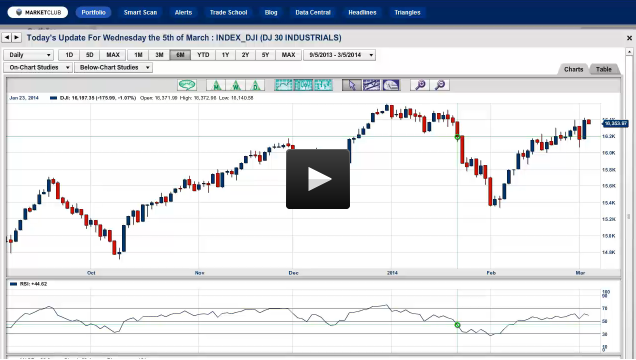 I believe as we go into the fifth year of the current bull market, time may be running out for some stocks. I'll be paying close attention to the Trade Triangles should we have a major reversal signal.

One index to look at closely is the Dow Jones industrial Average (DOW), which is in a negative pattern based on the monthly Trade Triangle. Once the weekly Trade Triangle kicks in, one could be fully short this index or out of the market.

I believe there are going to be some amazing opportunities in 2014!

3 thoughts on “Ukraine or No Ukraine - Are Stocks At A Tipping Point?”