Hello traders everywhere! Adam Hewison here, President of INO.com and co-creator of MarketClub, with your video update for Friday, the 25th of April.

There's no question about it, these markets are in turmoil not knowing what to do. On one hand, the NASDAQ is showing a negative trend based on Trade Triangle technology, and the DOW and the S&P 500 are indicating a sideways trend at best.

Today I'm going to be looking at key areas to watch for in these markets and what to do if and when these levels are broken. 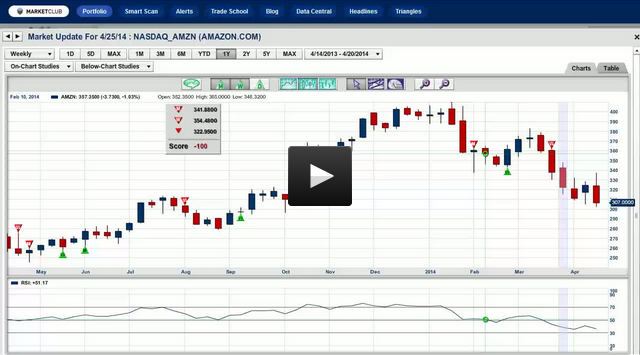 I still believe that the deal breaker in this whole equation is going to be what's happening in the Ukraine. With Putin flexing his muscles on the global stage and no one willing to stand up to him, he knows that he is going to win the game he is playing. Just yesterday, he indicated that sanctions mean nothing to him. That is the only weapon the west has or is willing to use against Russian domination of Europe. Like it or not, Putin’s aggression is going to cast a pall over all of Europe and a slowdown in business and the nascent recovery that was beginning to take place there.

Let's take a look at the major markets now and the current trends based on MarketClub's Trade Triangle technology.

As you can see, many of these markets have conflicting trends creating choppy trading conditions.

Just to clarify a point, when you see a 50 or 55 Score for any market, that is an indication of a trading range with no clear-cut trend in place.

One thought on “Proceed With Caution”