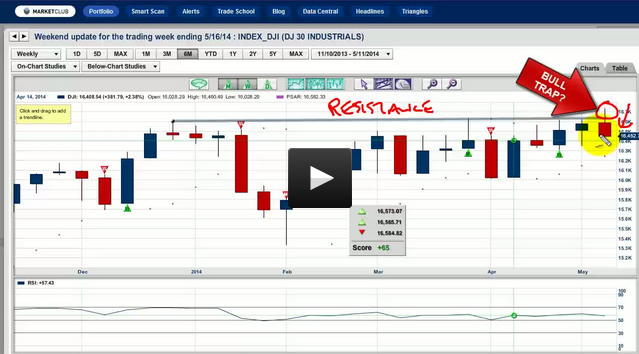 Since making their highs on Tuesday, the DOW and S&P 500 have been steadily moving lower and are in danger of closing lower for the week. Doing so would create a "negative engulfing line." A "negative engulfing line" or "bearish engulfing line," as it is some times called, is when the market price action engulfs the previous open and high period for the preceding week or day. If this turns out to be the case for the DOW and S&P 500 and this coming week they both close lower for the week, then the odds are pretty high that a top is more than likely in place.

Gold (FOREX:XAUUSDO) continues to meander sideways, but does appear to be building a base to move higher. If you have not seen my latest four-minute special video report on gold, then I highly recommend you check it out.

After falling dramatically, the Euro/Dollar appears to have found support. I expect in the short term for this support to hold as this market regroups.

Crude Oil (NYMEX:CL.N14.E) has put in a rather good week, moving up 1.8% from last week's Doji cross. A Doji candlestick cross is a Japanese candlestick term where the market opens and closes at the same price for the day or week. This type of formation often confirms a reversal in trend and in crude oil's case, it would appear that this market did reverse and start moving back up.

2 thoughts on “Were The New Market Highs A Bull Trap?”