Last week, we looked at the cyclical nature of gold prices (FOREX:XAUUSDO) and the fact that gold was potentially at a low in time. Today's upturn in prices may be the beginning of an up move that will push gold back up to the $1,380 level.

At the moment, gold seems to have very few friends and sometimes that is the best time to buy this market. After hitting a high of just over $1,900 an ounce in September of 2011, gold has slowly drifted to the downside. I believe that the $1,200 level is an important area of support for this precious metal and should not be overlooked. 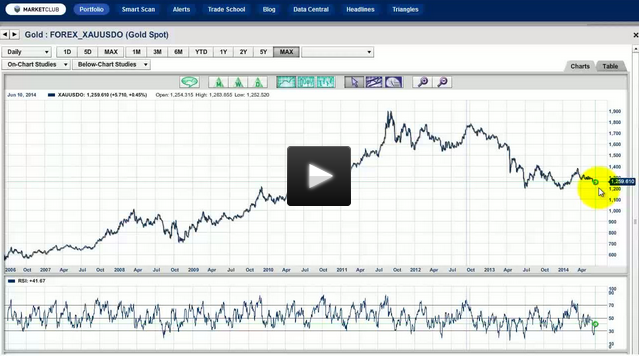 You have heard me say many times before on this blog that perception in the market is everything. Right now, the perception is that gold is not going to go anywhere in a hurry. While it may turn out to be true, there are certain clues out there indicating that gold could rally $150-$200 from the most recent lows. I'm sure many of you can recall when gold was trading close to $1900 an ounce, the talk of $2,000 $2,500 was all the rage amongst the traders. Right now with gold on the defensive and people calling for the gold market to go to $1,000 or even $800 an ounce, it's just the reverse situation. Sometimes it's psychologically difficult to turn your thinking around and that's why MarketClub's Trade Triangles do so well by giving you an unbiased opinion of the market.

At the moment, the Trade Triangles are on the sidelines with gold as of 6/5/14 at $1250.82. With the weekly Trade Triangle still negative, it is too early for those of you who are trading this strategy to get into the market.

When one looks at the quarterly charts, you see that the RSI is resting at the 50 level, indicating long term support for gold. I've talked about this in previous posts looking at the big picture is an important element to trading.

An early tip off for gold (FOREX:XAUUSDO) is going to be if and when the daily RSI for spot gold moves over the 50 level. That would be an early indication of a turnaround.

In today's video, I'll be analyzing gold in detail, so without further ado, let's take a look at gold.

2 thoughts on “Is This The Move In Gold You Don't Want To Miss?”