When was the last time you bought something on Amazon.com (NASDAQ:AMZN)? For me, I purchased a pair of cycling gloves last week. It seems that when Amazon reported a wider than expected loss, investors were surprised and shocked. What were they expecting?

The reality is that Amazon is a juggernaut in online commerce and is seeking world domination in selling you stuff. The strategy that Jeff Bezos is using for Amazon is not new, Sam Walton in the 60s did the exact same thing with Wal-Mart Stores, Inc. (NYSE:WMT). Sam's idea was pretty simple, start with low prices so it puts your competitors out of business, then you can raise your prices afterwards. Amazon is doing the same thing, but online.

Just like Walmart, Amazon made it easy to buy something and return it if you don't like it, all with no hassles. Amazon is building something that is incredibly valuable - millions of consumers who want to buy products through them alone. 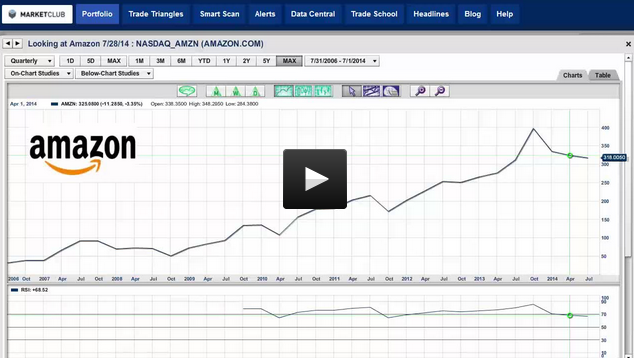 Just imagine, all Amazon has to do is raise prices just a little bit and they will be very profitable. Will consumers run the other way when this happens? No, as consumers we are so trained to buying at Amazon that a small price increase is not necessarily going to have buyers running.

Let's face it, we are all creatures of habit and I've gotten into the habit, like millions of other consumers, of just going to Amazon looking for an item and buying from them. Sure, if I searched around the web and spent a lot of time, I may save a dollar or two, but I would also be potentially doing business with companies I don't know. How reputable are they? Do I feel comfortable giving them my credit information and other private information?

So for me, Amazon is the one.

Going into the Christmas season, is anybody going to want to be short Amazon? I don't think so. The other amazing thing about this stock is that it hasn't had any real serious pullbacks, last week's included.

After reaching a high of just over $408 on January 22, 2014, Amazon retreated a little over 50%, hitting a reactionary low of $284 on May 9th of this year. Since that time, the market rallied back to over $360 before last week's earnings report.

The question is, do you want to be out of this stock in the third and fourth quarters?

I expect to see Amazon regroup over the $300 level and then have another push to new highs. Now that would be in a perfect world and of course, things are never ever perfect in this world. But, there are some positives that you can look at. The monthly RSI indicator is hovering above the 50 support line. The monthly Trade Triangle is still showing a longer-term uptrend for Amazon. The key to watch is the weekly Trade Triangle, should it turn green, it could be a strong merchandising third and fourth quarter.

If you have a few minutes, please watch the video as I look at Amazon in depth and explain my reason why Amazon may be a great buy for the balance of the year.