If you're not familiar with Twitch, it is a video game playing business that attracts 55 million unique viewers a month. That's enough viewers to put it among the 15 most heavily trafficked websites in the world.

So what exactly is Twitch and why did Amazon.com Inc. (NASDAQ:AMZN) shell out close to $1 billion to buy this company? Here is my take, young men's eyeballs. Young men are some of the hardest demographics to track for advertisers. The combination of Amazon and Twitch could be a killer combination for Amazon to sell products to this particular demographic. 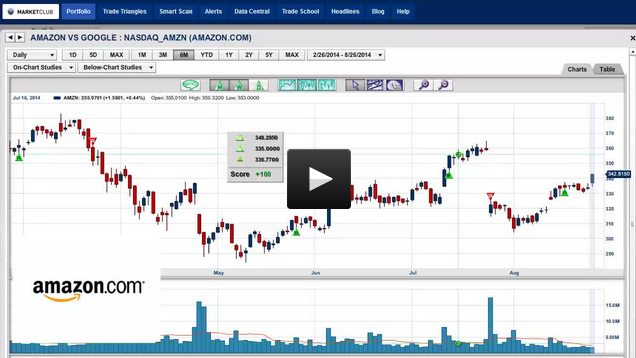 After making the deal with Twitch, Jeff Bezos, the chief executive of Amazon, said in a statement, "Broadcasting and watching gameplay is a global phenomenon, and Twitch has built a platform that brings together tens of millions of people who watch billions of minutes of games each month."

For many people over 40, watching gameplay or playing video games on a consul or computer is not in their genes. However, in the hard-to-reach demographics of young males, this could be a fantastic deal for Amazon. At peak viewing times, Twitch rivals many leading cable networks including MTV, Comedy Central and MSNBC.

Amazon’s business model is ever-expanding, taking in all kinds of different platforms to change and to market products. The move into video gaming/entertainment is new and could help sell more products, but I think the bigger picture for Amazon is in entertainment and advertising.

In my opinion, this is an excellent move for Amazon.com Inc. (NASDAQ:AMZN), who beat out Google Inc. (NASDAQ:GOOG) for this video gaming/watching/playing company. That leads me to another question, is Google losing its mojo and on the decline?

Technically, while the trend is still positive for Google, at the moment it looks like it has run out of steam. Amazon on the other hand has actually increased its acceleration on the upside, especially with today's announced purchase of Twitch.

Amazon has huge ambitions for the Twitch platform and while they say they won't change the platform dramatically, you can bet they will tweak it here and there.

Maybe Amazon's new tagline should be "Game On".