Don't be surprised to lose if you don't make an effort at being competitive.

And if you go out of your way to make yourself less competitive, expect to lose.

If that sounds like simple common sense, that’s because it is.

But it's also exactly what the US has been doing for years—enacting tax policies that sabotage its global economic competitiveness.

It's like trying to get in shape for a marathon by going on an all-McDonald's diet. (Speaking of McDonalds, check out this funny video spoof of what their commercials should really look like.)

Here are two major reasons why the US is lagging in the global economic marathon: 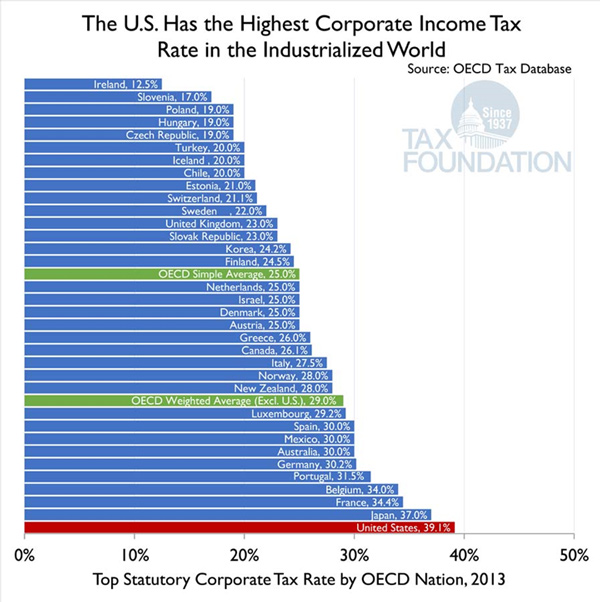 These "worst in the developed world" tax policies are clearly hurting the global competitiveness of American companies.

Being deemed a "US Person" for tax purposes is like trying to swim with a lifejacket made of lead.

It should come as no surprise that an increasing number of productive people and companies are seeking to shed this burden so they can keep their heads above water.

At this point, it's more than just a trickle—it's an established trend in motion.

And I don't see anything that would reverse it. On the contrary, given the political dynamics—ramped-up spending on welfare and warfare policies, as well as an "eat the rich" mood—taxes have nowhere to go but north. And that means the exodus will continue.

Over the past couple of years, dozens of high-profile US companies have moved abroad (or seriously considered it) to lower their corporate income tax rate and to access their offshore retained earnings without triggering US taxes.

Among them are Medtronic, Liberty Global, Sara Lee, and Omnicom Group—the largest US advertising firm—to just name a few.

Earlier this year Pfizer, one of the world's largest pharmaceutical companies, sought (but was ultimately rebuffed) to move abroad, which would have cut its tax bills by as much as $1 billion a year.

The strategy these companies are using is known as an inversion. It's where a US company merges with a foreign company in a jurisdiction with lower taxes and then reincorporates there. Current US law allows for this if the foreign shareholders own at least 20% of the combined company (though some are trying to raise the minimum to 50%).

Now, despite the howls and shrieks from upset politicians and the mainstream media about these companies being "unpatriotic" and "un-American," they're doing absolutely nothing illegal. Inversions are totally acceptable within the current rules of the US Tax Code.

Chuck Grassley, a Republican senator from Iowa has said, "These expatriations aren't illegal. But they're sure immoral."

I beg to differ.

Why would anyone want to give the destructive bureaucrats in DC a penny more than is legally required? As far as I’m concerned, not only is there nothing wrong with going where you're treated best, there's also an ethical and moral imperative to starve the Beast.

And now the latest high-profile company to consider putting the Beast on a diet is Walgreens.

Walgreens is considering reincorporating in Switzerland as part of a merger with Alliance Boots, a European rival. The net effect for would be to reduce Walgreens' tax rate to 20%, down from around 31% now. The move is estimated to save around $4 billion over the next five years.

What really has the politicians scared is that inversions have started to snowball.

The New York Times quoted an international tax lawyer stating that "it takes one company with enough public recognition to start [a] domino effect."

Walgreens could be the company that triggers a domino effect. If Walgreens were to move, it would gain a significant competitive advantage against its rivals. CVS, Walgreens' main competitor, paid a 34% tax rate in recent years. Can CVS really compete with Walgreens if the latter is paying 20%?

Probably not. And that will only lead to more inversions.

Another Way to Starve the Beast

Remember, US companies are not globally competitive because of these two unique burdens:

We have already seen how inversions can reduce #1, but they also offer huge benefits in terms of #2.

Medtronic, for example, has accumulated $20.5 billion of untaxed earnings in foreign subsidiaries. By reincorporating abroad, Medtronic can access that money without getting slapped with US corporate income taxes, which would save it billions.

Contrary to the government propaganda, the villains in this story aren't the companies seeking to diversify abroad to remain globally competitive. The villains are clearly the spendthrift politicians who enact these "worst in the developed world" tax policies, which create very compelling incentives for these companies to leave the US.

While the US should be enacting policies that make it attractive for productive people and companies to come to the US—rather than driving them away—don't hold your breath for positive change. It’s more likely that nothing but more taxes and regulations are coming.

But as we have seen with companies like Medtronic and Walgreens, companies have options too.

And it's not just multibillion-dollar corporate entities that have options. Individuals operating on a modest scale can also reap enormous benefits by diluting the amount of control the bureaucrats in DC (or any country) wield over them. International diversification is the solution.

You do this by moving some of your savings abroad with offshore bank and brokerage accounts, physical gold held abroad, owning foreign real estate, and establishing an offshore company or trust.

Obtaining a second passport is an important part of the mix as well.

You probably can't take all of these steps, and that's fine. Even taking just one will go a long way to reducing your political risk and giving you more options. In many cases, you don't even have to leave your living room.

Think of it as your own personal insurance policy against an out-of-control government.

However, things can change quickly. New options emerge, while others disappear. This is why it's so important to have the most up-to-date and accurate information possible when formulating your international diversification strategy. That's where International Man comes in.

To keep up with the best strategies, you might want to check out our Going Global publication, where they are discussed in great actionable detail.

The article Corporations Join Droves Renouncing US Citizenship was originally published at caseyresearch.com.