Exactly 19 days ago, the Dow was trading at a new all-time high. So how did everything become unraveled in less than three weeks?

In my humble opinion, the complacency that was in most investors' minds was overcome with uncertainty and distrust.

It arrived in the form of three waves. 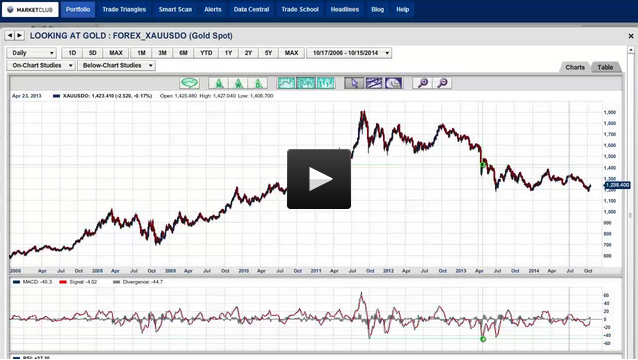 The first wave was ISIS and their rapid takeover of key areas in the Middle East. This uncertainty was exacerbated and emboldened ISIS further when the president of the United States stated on national TV that "we have no strategy" to deal with ISIS. It doesn't matter if you are a Democrat or a Republican - you do not expect to hear the president make a statement like that.

The second wave came with the news that Ebola had reached across West Africa to the shores of the United States. This scary news should not have been a problem, however it became a major problem with the conflicting stories about how a nurse who was in fully dressed in protected clothing contracted this deadly disease. To make matters worse, this morning we hear of another nurse who was diagnosed with Ebola. The Centers for Disease Control (CDC) so far seem ill-prepared. Not leveling with the American people about what is going on just adds another layer of uncertainty and distrust in government.

These three nuggets of uncertainty and distrust were all that was needed to plant the seeds of worry and distrust in investors' minds. That was enough for investors to pull in their horns and rethink their positions in the market. Collectively when you have thousands of investors thinking the same way on the same day, it is all that is needed to tip the markets to the downside.

You've heard me talk about the power of perception before. Perception is a powerful force in any market, particularly when a market is headed lower.

There is an old expression in trading that I first heard in the pits of the Chicago Mercantile Exchange where I was a member. "They slide faster than they glide." Translated it means that stocks go down a lot faster than they go up.

I would not be looking for any miracle turnarounds in any of the indices in the very near term, in fact I think they will continue to erode to the downside. Guessing where the bottom is, is just crazy in my opinion. I will wait until our Trade Triangles show the way.

With 10-year treasuries yielding less than 2%, what's an investor to do? In today's video, I will be taking a close look at a classic standby for times of uncertainty - gold (FOREX:XAUUSDO). Should you own it here? What are the risks? Has gold made a turn to the upside?

4 thoughts on “Did ISIS, Ebola, And The White House Crash The Market?”