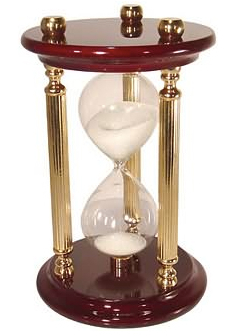 When I started my trading career in the early seventies, I worked under a guy named Gary, who was somewhat of a mentor to me.

Gary was an interesting guy and his trading style was just as interesting. Every time he made a trade, he would flip a large egg timer over and the sand would start running. The first time I saw him do this I asked myself, "what is he doing?"

Now you have to remember, I was new to trading back then and had never seen someone with Gary's unique approach and trading style. For all that I knew, having an egg timer on your desk and flipping it over every time you made a trade was a normal part of trading.

The idea is not as crazy as you may think.

Have you figured out why Gary was using an egg timer?

If you chose (C), you are correct! Gary used an egg timer for money management.

You see, Gary was using a "time stop."

Gary would find a set-up on his intra-day charts and act on it immediately. If the market did not move in the direction (either up or down) that Gary had predicted by the time the sand had finished running through his egg timer, he would exit the market win, lose, or draw. Gary did not invest any emotional capital in the market, he simply followed his game plan. It was just that simple.

Now, before you all rush out and buy egg timers, I have to say that I never had the type of trading personality to trade like Gary.

However, what I did learn from Gary and his egg timer method is this - start with a defined approach and game plan. Gary immediately knew, based on chart action, when he was going to enter a trade. And then, he put a time limit on success for every trade.

You may want to give Gary's method a try, but with a twist. You can substitute the egg timer for days or weeks as your time frame. If it does not work in your chosen time frame, exit the position.

Now I readily admit that this approach is not for everyone. However, it does have value to those investors and traders who are active in the markets.

P.S. If you want to learn more about money management click here.

One thought on “How An Egg Timer Could Improve Your Trading”