Hello traders and MarketClub members everywhere! If you look back at my very first post for December, titled "December Can Be A Dangerous Month For Traders", you'll understand why these markets are becoming so volatile. Yesterday's announcement, or lack of announcement by the Fed, was all the market needed to reverse course and rally sharply creating the best one day rally for the year for the indices. Not only was it a sharp rally with new buying, but it was a sharp rally fueled by a great deal of short covering. 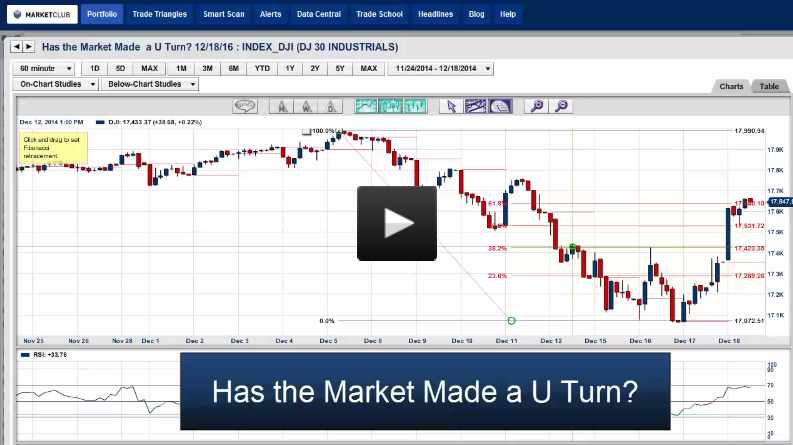 Here's an interesting question from Kathy on the Members Blog today:

Do you think the drop in oil prices could be signaling that the deflation which has a hold on Japan, Europe and China is now starting to spill over into the U.S. but its so unthinkable that the Fed and others are missing this possibility?

I am going to be answering Kathy's question a little later on today. You might want to stop by and let us know what you think about what is going on in the markets.

What also caught my eye today is the fact that gold (FOREX:XAUUSDO) prices went up along with equity prices, which is sort of a dichotomy and one that I clearly don't understand at this point in time. Listening to the Fed speak yesterday, everyone came away with their new word "patient." That one word and no change of course was enough to ignite the markets to the upside.

Looking at the price of crude oil (NYMEX:CL.G15.E) you would think we were going into a deflationary phase, while gold on the other hand seems to flatten out and may be giving a different signal. While the Fed has a lot of smart folks sitting on the board, I would rather take my cues by listening to the market. Over time, it is a lot smarter than everybody including the Fed. You only have to look back to a few years ago and see how the Fed completely missed all the negative signals that were building, indicating a pending market crash. But guess what? The market did not miss those signals.

Perhaps many of you have the urge to jump back in the market which is understandable, however I would resist that urge for now. You only have two or three more weeks before the holidays are over and the markets get back to a more normal footing.

Trading in the last two weeks of December is more like a crap shoot to me, with the odds not in your favor. In 2015 you have a full year to make money where you can put the odds on your side knowing that there is a high probability that you will make money. I said this before in one of my earlier posts, if you have not made any profits this year, trying to play catch up in the last two weeks of the year is not the way to do it.

In today's video, I'll be looking at the major indices, gold, crude oil, and one or two of the stocks I still like.

4 thoughts on “Has The Market Made A U-Turn?”