In theory, the price of any stock represents the present value of future cash flows. When those cash flows (i.e. earnings per share) are undergoing a contraction, the share price should theoretically decline. Occasionally, a share price will fail to reflect a future rebound in earnings growth that's expected to occur. In such a scenario, the intelligent investor takes notice. He knows that if projections are indicating a future rebound in earnings, then he can expect a future rebound in the stock price as well. He's aware that, in this instance, the further the share price declines today, the larger the percentage gain investors will see tomorrow. Thus, the stock is an obvious buying opportunity.

Let us turn our attention to Manitex International, Inc. (NASDAQ: MNTX), a provider of engineered lifting solutions. The company is currently valued at a market cap just north of $150M. Like many fast-growing small cap stocks, MNTX has seen plenty of volatility in both its earnings and share price. 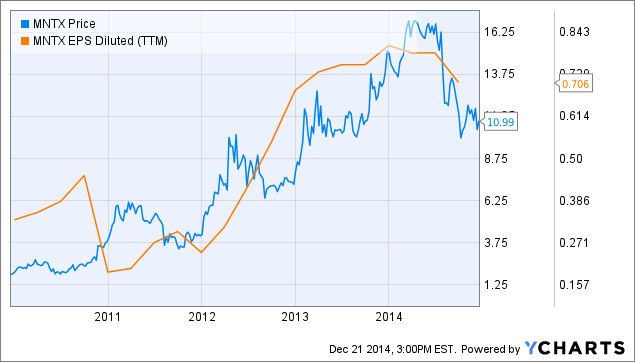 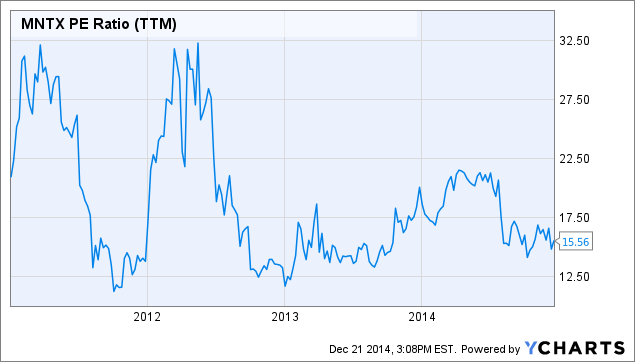 However, that simply isn't the case. In fact, the company's earnings growth is projected to make a large rebound starting in the first quarter of FY 2015, and the expectation is that it will sustain a high level of growth over the long term. Estimates for Manitex's YOY earnings growth are 43% in 2015 and 34% in 2016. These are relatively large growth rates, and they're nearly impossible to find at such a cheap price anywhere else in this market.

According to FinViz.com, the company is expected to grow EPS at an average annual rate of 30% over the next 5 years. Using this growth rate, the stock has a PEG ratio of just 0.52 – a large indicator that the stock is growing fast and can be had at a cheap price. Stocks with these attributes, historically speaking, tend to produce the highest returns for investors.

Great For The Medium Term, But Not For The Long Term

One might make the mistake of looking at Manitex's current ratio of 2.7 and debt/equity ratio of 0.6, leading to the faulty conclusion that the company is financially sound enough for an investor to buy and hold MNTX stock for the long term. Do not be fooled.

Although MNTX will likely be a strong performer in the coming months, investors shouldn't count on the stock to reliably produce consistent returns in the coming years. The company doesn't pay a dividend, nor does it have a share buyback program. Rather, Manitex has consistently relied on equity issuances for much of its funding. 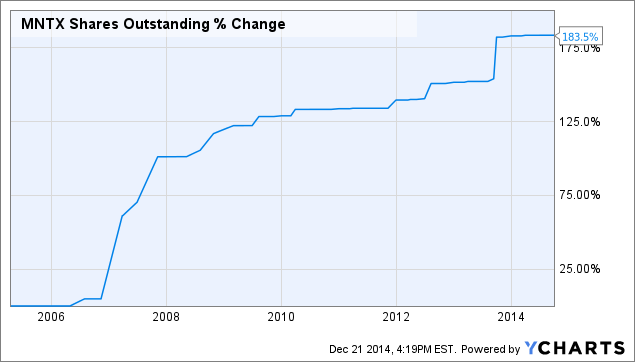 In the last 10 years, the company has almost tripled its shares outstanding through numerous issuances of its stock. For someone who plans on buying and holding onto MNTX, this would be a huge concern. When times are tough, it's not in an investor’s best interest to be holding onto the stock of a company whose funding is reliant on diluting the value of its shares.

Additionally, the company currently has a debt level of ~$100M, representing 38% of its TTM revenues (~$263M). A future rise in interest rates across our economy will likely cause a significant rise in Manitex's interest expense, which will be further impacted if the company’s debt levels continue to trend upward. 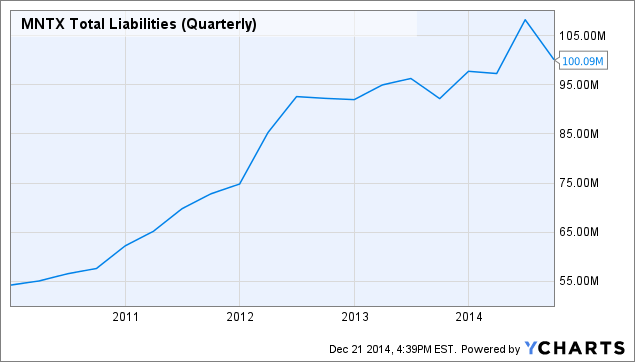 The result of this phenomenon will be an intermittent downward effect on the company's earnings, which would theoretically suppress MNTX's share price. However, keep in mind these are long term concerns which likely won't have a material effect on the company’s bottom line for at least a couple of years.

Heading Into 2015, The Share Price Has A High Floor And A High Ceiling

I concur with the analysts' bullishness. With a miniscule PEG ratio, coupled with a giant rebound in EPS growth that's projected to take place in 2015, MNTX's share price looks primed to take off in the coming months. 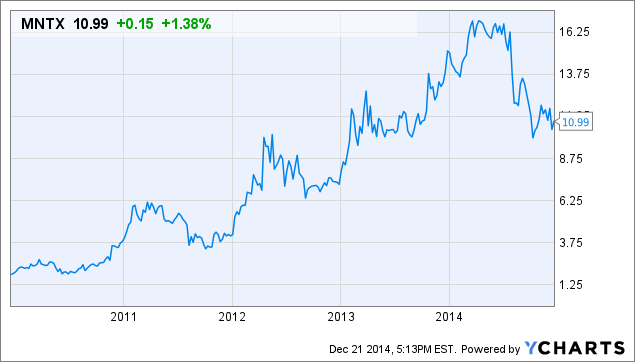 Looking at a 5-year price chart, the stock has historically been an excellent buy at the turn of a new year. Therefore, I recommend buying MNTX now, and unloading your shares if and when the price reaches the high-teens in 2015.