No doubt by now, you've heard of the problems in Russia with its currency. You have to say to yourself, "a 17% return on my money sounds pretty good," but when the ruble sinks more than that in one day, you say, "WHOA, will I get my money back?" And that my friends is Russia’s Achilles' heel right now, as investors ponder whether they going to get their money back before capital controls are put in place.

If you didn't think commodity markets are important, think again. The correlation between the collapse of the Russian ruble (CME:6R.Z14.E) and the collapsing oil market is extraordinary and I will illustrate it for you in today's video. 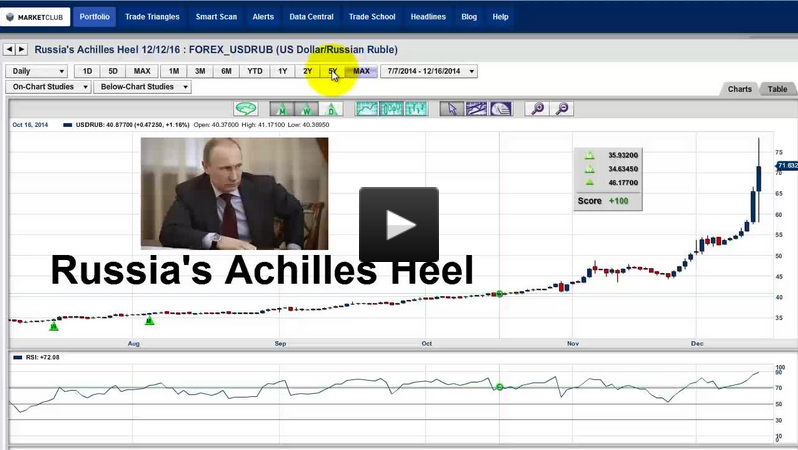 Who knew that Saudi Arabia alone could, in essence, break the Russian economy almost in half, not with tanks and bombs, but with a commodity called crude Oil (NYMEX:CL.F15.E).

Saudi Arabia has continued to push production from its vast oil fields in order to lower the price of oil and make it difficult for competitors to stay in business. One of the amazing side effects to all this is the fact that Saudi Arabia has basically ripped the guts out of the Russian economy and its cash cow, crude oil.

Should Europe and the west be happy about this? I think not and here's why.

To be truthful, no one knows for sure how the scenario that's unfolding is going to play out, but it is not a healthy one in my estimation. With the Central Bank of Russia being unable to stem the decline of the ruble not only against the dollar, but against the euro and other major currencies, the next logical step for Russia will be capital controls.

Putin and the Russian people will be looking to blame someone for their misfortune and they are going to be pointing the finger at America for all the problems we have caused them. As things get more difficult in Russia and with winter coming on, Putin is going to act like a cornered animal and he will come out fighting. That may not happen right away, but it will happen sooner rather than later, in my opinion.

Many economists never expected or predicted oil would drop below the $70 a barrel level and we are now trading in the low $50s. Can oil prices go lower? Yes, of course they can. The question is, will they?

There is no crystal ball to tell us what the future's going to be in trading, all you have are the three "P's" - probabilities, possibilities and lastly, perception. You've heard me talk about this many times before, that perception is perhaps the most powerful force in the markets. Perception is a major market driver right now in all the markets around the world.

Many investors have been lulled to sleep by the US stock market, which for the most part has been moving higher and higher for the past six years. I believe that this is all coming to a head as many investors are just now getting concerned about their money. Let me give you some first-hand evidence of this, my wife and I were out to dinner on Saturday with some friends and out of the blue they asked me what I thought about the market. Now that's unusual, as we don't ever talk about the market at dinner. That struck me as unusual and I think that millions of other investors are thinking pretty much the same thing. We've had a good run, it's the end of the year let's take our profits while we still have them. All this collective thinking adds up to market pressure and the perception that stocks are going to fall.