Readers of my most recent columns know that I’ve been very critical of the Federal Reserve’s sluggishness – if not actual lack of resolve – to start raising short-term interest rates now that the economy has finally started to show some staying power. The earliest projections, both from Fed officials and market prognosticators, is that the first rate hike won’t come until well after the end of the first quarter of this year, if not sometime in the second half.

But even if the Fed should start taking my advice and start raising rates sooner – it looks like the March 17-18 FOMC meeting would be the earliest – don’t draw the conclusion that I also think long-term interest rates are headed any higher anytime soon.

If anything, I think long-term rates are headed lower in 2015, meaning I think this year will be another good year for bonds, U.S. Treasuries specifically.

That makes me a bit of a contrarian, which is usually where I feel most comfortable anyway.

According to a recent Bloomberg survey of 74 economists and strategists, 2015 will be a “disastrous year” for U.S. government bonds. Indeed, calls for higher yields this year “are the most aggressive since 2009, when U.S. debt securities suffered record losses,” Bloomberg said.

Fully 20% of investors, traders and analysts surveyed by Bloomberg picked government bonds as their top choice for shorting, the most of any category. Including those who selected emerging-market debt and investment-grade corporate bonds, 45% said they would short bonds. By comparison, 30% of those surveyed believe stocks in developed markets, like the U.S., will be the best place to put money.

Bloomberg notes that most forecasters got it wrong last year, predicting that bond rates would rise. Instead, the yield on the 10-year T-note dropped 86 basis points. Bonds worldwide returned 6.4% in 2014, the most since 2002, according to the Bank of America Merrill Lynch Global Broad Market Index.

The main reason for bond bearishness this year seems to be that “Treasury yields have nowhere to go except up.” The median forecast from Bloomberg’s survey calls for the yield on the 10-year T-note to top 3% by the end of 2015, or up more than 80 basis points from 2.17% at year end 2014.

But there’s no reason to believe that will happen. My argument for lower rates is based on the relative level of U.S. bond yields compared to those of other sovereign governments. And using that as a barometer, long-term U.S. yields are way too high.

In 2014, as the accompanying chart shows, yields on 10-year Italian and Spanish government bonds plunged well below those of comparable U.S. securities. It wasn’t too long ago that Italy and Spain were considered part of “peripheral” Europe, both for geographic as well as financial reasons. With their borrowing costs now well below those of “risk-less” U.S. government bonds, we don’t hear that term much anymore.

Yields on comparable French government bonds are now less than half of those in the U.S., while yields on benchmark German bonds have fallen to near Japanese levels, more than 160 bps lowest than U.S. 10-year notes. 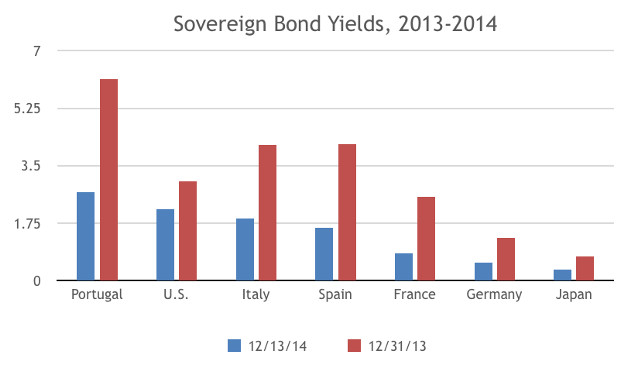 The country where the U.S. does line up most closely with is Portugal. As we began 2015, Portuguese 10-year bonds were trading at a yield below 2.50%, or just 40 bps higher than comparable U.S. securities.

Can that differential continue much longer? Does it make sense that Italy and Spain can borrow more cheaply than the U.S. can, while France can borrow half as cheaply?

I don’t think so. What I’ve learned from 30 years of covering the bond market is that while market dislocations like these do occur fairly often, things do eventually return to normal, rational levels.

The euro zone economy is already in recession or close to it, and the latest Greek crisis will only aggravate matters. The European Central Bank has basically already promised to start buying bonds early this year, which will further drive rates on sovereign bonds down further still, as they did last Friday after Mario Draghi promised action soon.

Granted, the economic circumstances in the euro zone are a lot different – that is to say, a lot worse – than they are here.

But there are factors here in the U.S. that also argue for lower rates, namely low inflation, which will be further pressured by low energy prices. I’m also expecting a major equity sell-off as soon as the Fed starts to begin raising short-term interest rates, which will kick off a flight to the safety of government bonds. We can also probably rely on a geopolitical crisis or two – Russia again, Iran, ISIS, Greece, some black swan event – that will drive nervous investors into Treasuries. We saw some of that on Monday.

Certainly, many investors, especially retirees, aren’t happy about low bond yields. But you can still make money on "govvies."

Visit back to read my article next week!