This week I prepared for you an analysis of gold versus the euro and why it might be profitable choice.

My last post was also dedicated to the European cross of gold versus the Swedish krona and, for the time being, it managed to gain more than 200 SEK per troy ounce (already or more than 2%). The target is set for a 14% gain, so please be patient. 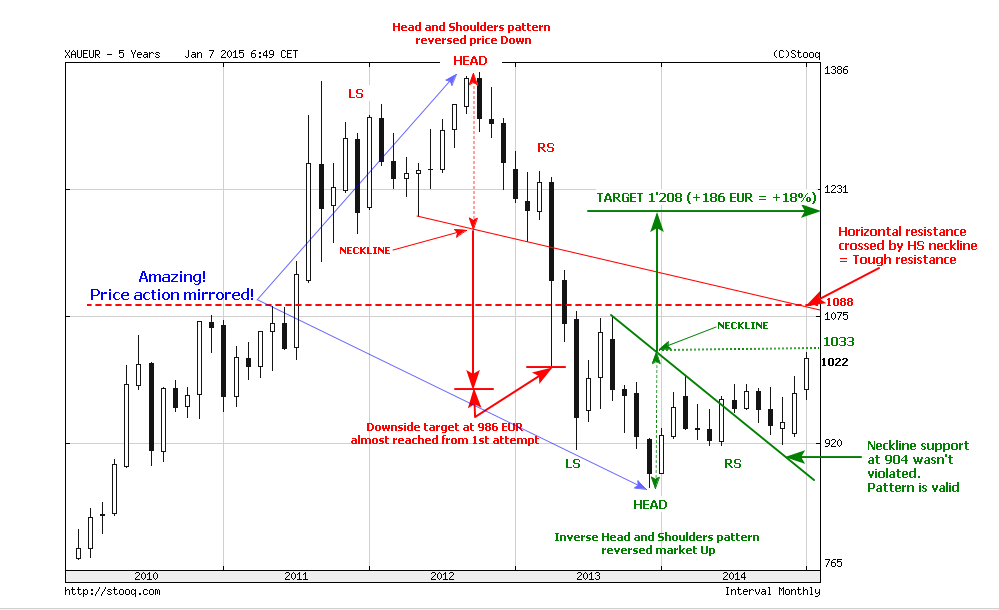 Today I am going to tell you about a chance to score a nice 18%. The chart above is a monthly candle graph of XAUEUR for the last 5 years. It was me who wrongly forgot about such a liquid metal cross with such an interesting chart pattern being shaped. But fortunately, today we still have a chance to buy gold versus euro.

This pair was in an uptrend from 2005 until 2012 and then was reversed by a head and shoulders pattern, highlighted in red. Shoulders are marked as follows: “LS” for left shoulder and “RS” for the right shoulder and the head is in between. The left shoulder looks strange as it is double topped, but the pattern is valid despite this exotic shoulder. It is not so valuable to calculate the target for the fulfilled pattern, but let’s do some back-testing for self-study purposes. So, we have the head’s top at 1386 in October of 2012. We have the neckline where the vertical height of the head crosses at 1186. Now we calculate the distance between the above mentioned points, which is highlighted in red dashed arrow, which is at 200 EUR. To find the target, we should subtract 200 EUR from the neckline point at 1186, which equals 986. Now, see where the target is and where the market was after the first downward move, both are underlined in red, 986 versus 1013. The difference is trivial. That’s almost an ideal example of this pattern’s development. Back-testing shows that pattern was valid.

Let’s get down to our current situation. 2013 was a crash year for gold against almost all currencies. Gold lost almost 40% of its value against the euro. Free fall is the right wording for this move.

Right after the first pattern, the next looks like a mirror image. We can see an inverse head and shoulders formation shaped in 2013-2014, which is highlighted in green and means there is a bullish reversal. Again for easy identification, I marked both shoulders, “LS” for left shoulder, “RS” for right shoulder and the head is among them. The main points are: the neckline point where the vertical height of the head is at 1033 EUR, the bottom of the head is at 858 EUR, and the difference between them is 175 EUR. So to calculate our target, we should add 175 EUR to the neckline crossing point at 1033 EUR. That would make the target 1208 EUR per troy ounce. From the current level of 1022, the possible gain is 186 EUR per ounce or 18% for purchase! Not bad!

The pattern is valid, as the price didn’t test the neckline support located at 904 on the backward move which was stopped at the 918 EUR level. Fingers crossed! Now, what do we need to look at? First is the nearest support – 2014 year high at 1000 EUR, easy to remember. Once price breaks this level, square your longs. On the upside, the main obstacle is the horizontal resistance, highlighted in the red dashed line, which is reinforced with the crossing of the upper head and shoulders’ neckline highlighted in the red full line at the 1088 EUR level. This would be very tough resistance.

And at the end, I want you to have an abstract look at the chart. The price action in 2011-2013 has been mirrored in 2013-2015. Even the shoulders of both patterns are double topped/bottomed. The mirror surface is located at the 1088 level. I hope you find it as amazing as I did! The market is not just numbers, but also beautiful charts & patterns.