After fending off one blow from the SNB and another, albeit positive, surprise from the ECB, investors’ focus will, naturally, shift to next week when the Federal Reserve’s rate decision will take place. “What will Yellen say this time?” markets want to know. Can the Fed Chairman really stay hawkish while the rest of the world is plunging into a new cycle of easing? These questions have loomed over Fed meetings for a while now, especially as Oil prices plummeted and inflation expectations lowered. Yet to the surprise of many Fed watchers and investors, Janet Yellen, “the dove,” continued to press forward with a hawkish tone, giving an upbeat assessment on growth and stressing the Fed’s conviction that disinflation (low

inflation) is transitory. As the next meeting approaches, investors are now almost certain that the Fed will keep its hawkish tone in a rhetorical buildup towards an actual rate hike between June and December. But sometimes, when the consensus is optimistic, it is worth the time to pause and reflect on another possibility; could the Fed change its proverbial mind?

One of the main anchors of the Fed’s belief that, indeed, the drop in inflation below 1% was and is transitory, is the US consumer. The rooted belief, as was expressed by the Fed Vice Chair Stanley Fisher, is that as growth continues to accelerate and unemployment to fall, the US consumer will feel more confident and will begin spending more, thus lifting inflation back to normal levels, even as global commodity prices are in meltdown mode.

With US Consumer confidence hitting 98.2 and growth for Q3 reaching 5% at an annualized pace, and given robust retail sales, this notion of a transitory fall in inflation seems a reasonable supposition. And as long as consumers are spending more this makes perfect sense; more spending, less excess capacity in the economy, higher prices. Yet, with data on credit to consumers now having been released, any slowdown in retail sales may put a big question mark on that scenario. Recent data from the Fed shows that revolving credit, i.e. not mortgage debt but rather “quick credit” such as credit cards, took a sudden and unexpected plunge in November, falling by -1.3%. That data is not exactly in line with a confident, ready-to-spend consumer. Instead, and in utter contrast, a slowdown in consumer credit which comes with a sudden fall in retail sales and a plunge in commodity prices may point to a classic behavior in a disinflationary environment, an environment wherein consumers are postponing purchases because they believe prices will be lower in the future, thus starting another, often recurring, cycle of a fall in inflation. And if this is the case, then disinflation might not be that transitory after all, putting a big question mark on the Fed’s core scenario and an even bigger question mark on what investors believe around the world; that is, is a Fed rate hike coming soon? 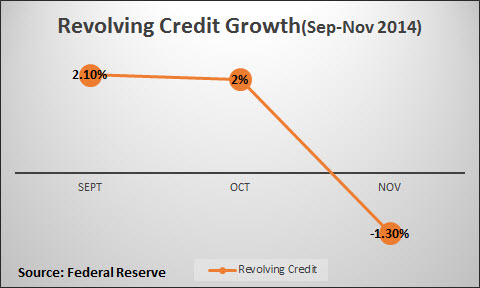 Moving to Dovish in March?

With data still robust overall, there is no reason for the Fed to change its hawkish tone that quickly; after all, this might very well be a short term bump in a long term trend upwards as the consensus expects and as hawkish members, and Yellen herself, believe. Yet, the next release of consumer spending data and credit due out next month could change that belief. As seen in the chart below, consumer spending rises in tandem with consumer prices. The Fed believes that consumer spending will continue to rise and thus will push inflation back up. But as one can see below, the final column for 2014 is missing in the consumer spending vs CPI chart, and if this column falls lower it could eventually prove that the Fed was wrong and that consumers, instead of spending more on the back of cheaper prices, are spending less as they would in a deflationary cycle and just as is happening around the world. Although the Fed tends to move gradually and therefore will not explicitly ditch its plans to raise rates, a clear warning on the risk of falling inflation would be enough to send investors a stark warning that rate hikes could be pushed back, further into the future, once again, much as Dollar bulls dreaded. So, before taking a US rate hike as a certainty, beware; a change from a hawkish Fed to a dovish Fed may be closer than it appears. Although data may eventually come in line with the Fed’s hawkishness, it might be a mistake to take a hawkish Fed for granted. Rather, it is wise to put a big question mark behind every hawkish statement until the data reaffirms that inflation is coming back again. 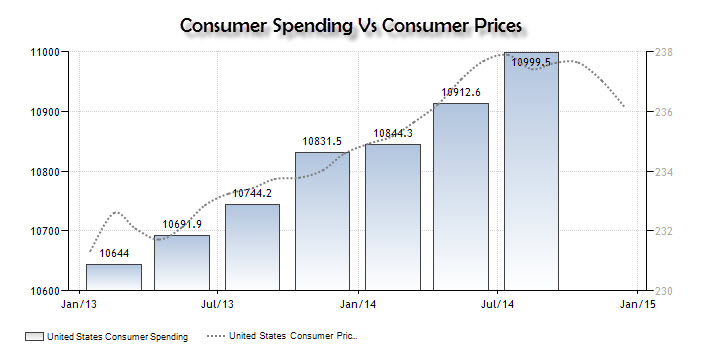 10 thoughts on “Fed on the Brink of Dovishness?”