This past weekend I saw a great movie titled, The Imitation Game starring Benedict Cumberbatch and Keira Knightley, both of whom are nominated for Academy Awards, as is the movie itself.

The Imitation Game chronicles the life of Alan Turing, who is largely credited with developing the computers we use today. The story revolves around the incredible work that was done at Bletchley Park in England to break the German Enigma code. At the time, the Enigma code and machine were thought to be unbreakable. The breaking of this code helped shorten and end the war. Otherwise, I would be writing this post in German and not English (I was born in England right after WW2).

If you haven't seen the movie, I highly recommend seeing it and witnessing the extraordinary genius of a remarkable man named Alan Turing.

Why would I discuss and recommend a movie when MarketClub and INO.com are financial websites dealing with stocks and futures? The reason I bring this up is because I wanted to share with you some math today that can help you in the market.

Now don't worry this is not high-level mathematics, it has more to do with a remarkable sequence of numbers known as the Fibonacci sequence.

The Fibonacci sequence can help traders find significant price points and predict levels of support and resistance. It's based on the Fibonacci sequence of numbers, identified by Leonardo Fibonacci in the thirteenth century. The relationships between those numbers are shown as ratios, and those ratios are used to identify possible reversal levels.

The Fibonacci Sequence and Ratios

The Fibonacci sequence of numbers is calculated by adding the two previous numbers to get the next number in the sequence, beginning with 0 and 1 and extending infinitely. Each number is roughly 1.618 times greater than the preceding number, also identified as the “Golden Ratio.”

The 23.6% ratio is found by dividing a number in the sequence by the number that is three places higher.

The 38.2% ratio is found by dividing a number in the sequence by the number that is two places higher.

The 61.8% ratio is found by dividing a number in the sequence by the number that is the next highest in the series. This is also the inverse of the “Golden Ratio.”

The 50% ratio is not a key Fibonacci ratio but is commonly included as an important retracement level.

In a trending market, like we have in gold right now, Fibonacci retracements can help traders determine how much a market might retrace before resuming its trend. A retracement is plotted by taking a high and low on a chart, and dividing the vertical distance by the Fibonacci ratios. These significant values, as determined by the ratios, then act as Fibonacci levels and represent areas of support and resistance.

Don’t worry about doing this in your head, MarketClub has a tool to do the math for you, quickly and easily.

Here is a very recent and classic example of a major 61.8% Fibonacci retracement in gold. 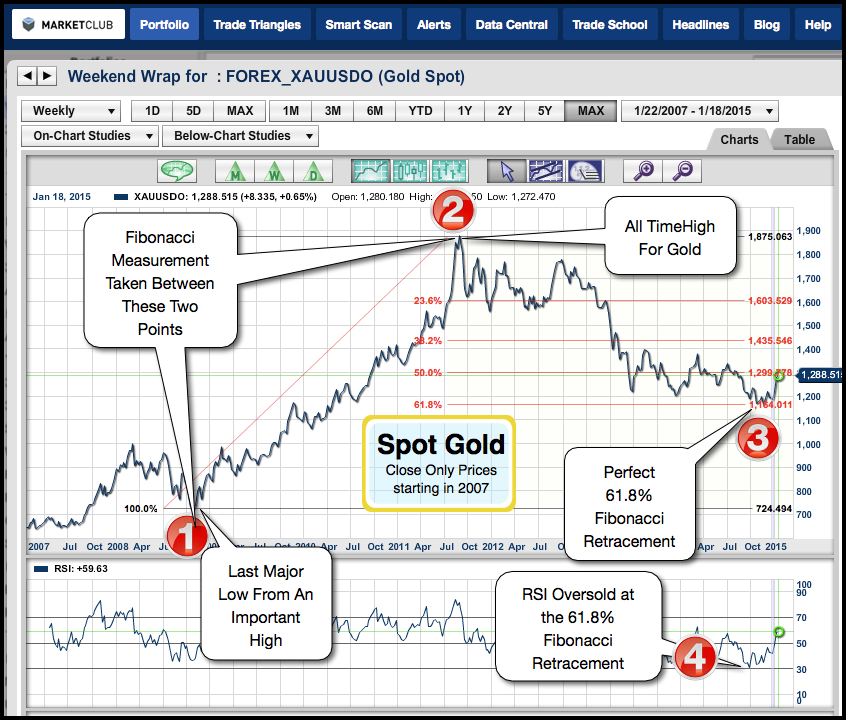 If you have used Fibonacci in the past or use it now, please share with us your experience in using this remarkable tool. If you would like to learn more about the Fibonacci Sequence, check out this video.

As always, I appreciate your feedback. Please feel free to leave your comments below this post.