January turned out to be a harvest month for decent gain opportunities. This week, let's discuss copper which could lose half its weight this year. Impressive! Let's figure out how. 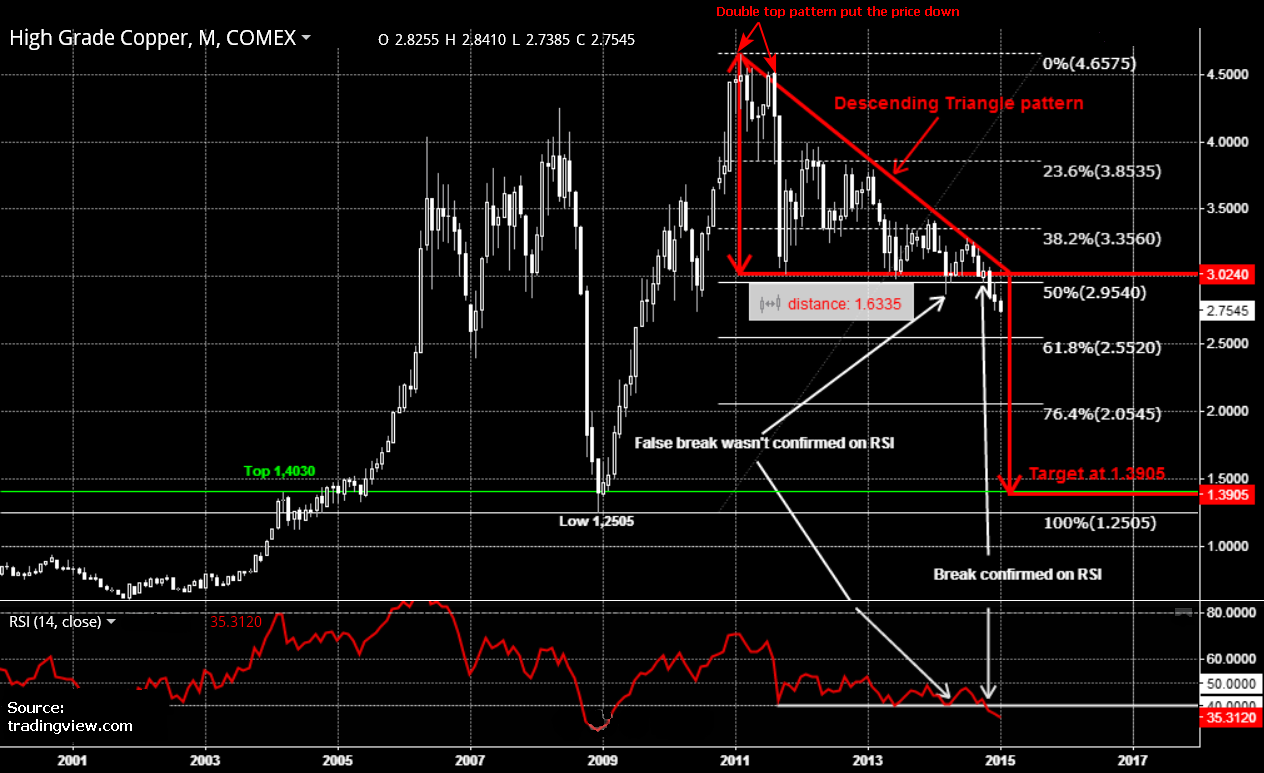 On the chart above, you'll see a monthly candle graph for COMEX high grade copper futures. As you can see, copper isn't phlegmatic at all, see-sawing up and down from below $1, up to almost $5 and again down for the past dozen years. And of course, that's why it is one of the best choices fo speculative traders.

This reddish metal started 2009 as a rocket. Not to overload the graph, I didn't put Elliot waves on the bullish run. Two cycles completed on the way up from $1.25 to $4.55, where the fifth wave stalled with the top done at the $4.65 level at the start of 2011. 2.5 years of total growth thanks to QE. You should have noticed that fall is very short lived compared to unhurried growth, as fear is stronger than greed everywhere in the markets.

In 2011, a double top pattern was shaped and the market crashed down scoring more than $1 just for one month, September was hot! It was a very technical move, the neckline of the double top coincided with a 23.6% Fibonacci retracement level at $3.85. It's clearly seen on the chart that price couldn't break this support on its first try. The second try was successful and triggered the metal’s massive sell-off to the $3 level.

Price stuck for three years between 2011 and 2014 in consolidation with three reaction lows horizontally touching the $3 level and seven consecutive lower highs. All of this sculpted a descending triangle formation. This pattern is bearish and requires the horizontal support to be penetrated for a further move down. The first attempt in last September failed, but November brought the break-out, even the 50% Fibonacci retracement level located just below the triangle’s support at $2.95 couldn't stop the fall. A month ago, copper touched that level on a light pullback and now continues its move down.

The target for the triangle’s break-out is located at $1,3905. You can calculate it by subtracting $1.6335 (height of triangle, highlighted in red double arrow) from the horizontal support located at $3.0240 (highlighted in red). It's another $1.364 to fall or almost 50%. If we call the XAU/SEK projected gain of 14% (scored 7% already) or the XAU/EUR potential gain of 18% (scored 1% up to date) to be decent or even impressive, then I can't find the word for a 50% gain in one instrument. Please help me if you know such a word.

Now that the reward is discovered, what is our risk and where are our obstacles? Since the 50% Fibonacci retracement level of $2.95 stopped the recent pullback, then we should square our shorts above that level. To be more conservative, I would put a stop above the $3.03 level, as it will be second resistance. Risk is then 10% and potential gain is 50%, 1:5 – a very conservative risk-reward ratio.

By the way. INO’s powerful Trade Triangle indicator shows a very bearish score at -90 and it was even two months earlier to predict the fall ahead of the chart pattern described today. 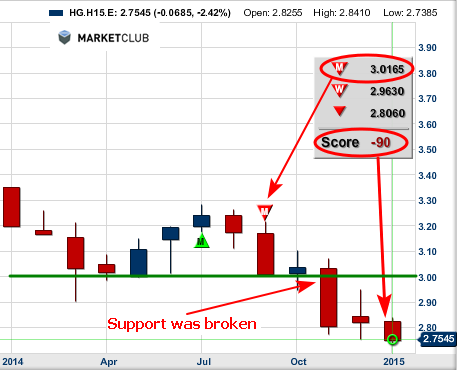 7 thoughts on “Ready Or Not, Copper Could Halve Its Value!”