After the bell yesterday, Amazon.com Inc. (NASDAQ:AMZN) announced, to the surprise of many, that they made a profit. That, of course, is good news if you were long their stock. The Trade Triangle technology got this one wrong, but also got it right as well, let me explain.

Prior to Amazon's earnings announcement, the Trade Triangles were on the sidelines having received a signal to cover any short positions on January 23rd at $314.75. While the Trade Triangles missed the big 10% up-move in after-hours trading yesterday, it certainly did not cause any harm either. Not getting caught wrong-footed in the market is an important element to successful investing. Or to use Warren Buffett's number one investment rule: #1. Do not lose money. His second investment rule is: #2 Do not forget rule number one. 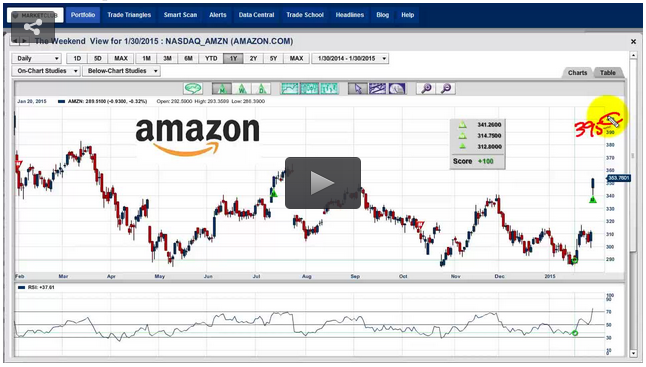 Jeff Bezos, the chief honcho at Amazon and its driving force, decided to hold back on some some of his expansion spending and give investors something to smile about while placating the street, which was beginning to think that Amazon would never make money.

I don't think it's any secret, but Amazon wants to be everything to everybody. It wants to be the go-to place where we buy things, and they think they're succeeding. I know that they have me as a loyal customer.

Watch Amazon closely today as a move over $341.30 will ignite a major Trade Triangle buy signal that will indicate a reverse of the downward trend and a possible move up to the $395 area.

On the other side of the coin, Google Inc. (NASDAQ:GOOG) disappointed investors with disappointing earnings. The Trade Triangles have been on the sidelines and see no clear-cut pattern in this stock at the moment.

Time to buy gold again? I think so, gold (FOREX:XAUUSDO) has now fallen back to its RSI 50 line indicating it should find good support at current levels. If you want to be conservative on this trade, you may want to give it a few more days to consolidate its recent pullback and wait for a daily green Trade Triangle to kick in. I think that gold will once again resume its upward trend and move to my target zone of $1340 an ounce.

In today's video, I will be looking at Amazon, gold and a host of other markets. I'll also be looking for "52-week high on a Friday" trades for some weekend trading opportunities.

Hope you all have a great weekend. I’ll be back on Monday with more trading ideas to help you improve your trading and profits.

One thought on “Shocking News From Amazon And Google”