If only one could know – in advance – when oil prices would bottom… right?

Well, on Fox Business Network’s Varney & Co. Wednesday morning, a well-known expert informed us he expects gas prices to exceed $4 per gallon again by the end of the year. That’s right; in 2015!!!

“Care to put your money where your mouth is on that?” the show’s host, Stuart Varney asked, in essence (I’m paraphrasing).

Would you take the bet? The guest, former Shell Oil President John Hofmeister did! Varney, of course, eagerly and confidently took the other side.

Here’s a link to the video, if you’d like to watch these 2 aspiring futurists making a $100 bet. Oh, and you’ll be able to hear Hofmeister’s logic as well (summarized later in this article for your convenience).

Mr. Hofmeister must feel pretty secure in the deal he reached with Mr. Varney, since Hofmeister appeared on CNBC the day prior, predicting (sans bet) $5/gallon gas by 2020, saying the world will need 100 barrels of oil by that time, and that “we don’t know how to get there yet.”

Incidentally (speaking of being an aspiring prognosticator), Hofmeister made a similar prediction in 2010 that gas would reach $5/gallon by 2012. That 2010 prediction, he contends, did come to pass, if only in California, Illinois, and New York. See this CNBC video and article from Tuesday.

In the next breath, though, Hofmeister said anyone would be foolish to try to predict that today’s $46/barrel crude oil prices represent a bottom. He doubts oil will go to $20 or $30, but admits it could happen. Pretty ironic, I thought, that he’d go on TV to make a specific call for a specific gas price within a specific time frame – even betting the show’s host $100 – while admitting a moment later that such prognostications are a fool’s errand.

The irony struck me profoundly enough that I decided to try to find out a little more about Mr. Hofmeister. Could he have any incentive – or ulterior motive – for talking up the price of gas 11 months hence? For jumping on the cable news circuit and creating some buzz? What I found, in my view, is Hofmeister seems like a noble enough fellow, and I won’t sit here and accuse him of unduly inciting hype or fanfare for personal or organizational gain (outside of a little harmless publicity). Here, you be the judge. Here are some of my findings.

Hofmeister devotes much of his time and energy to promoting natural gas and other non-petroleum energy sources for a living – including using natural gas as a transportation fuel. He’s the founder and Chief Executive of a non-profit 501(c)(3) organization called Citizens for Affordable Energy. He also apparently tours the speaker circuit to some degree. The Fox broadcast didn’t mention Citizens for Affordable Energy, introducing Hofmeister simply as the former President of Shell Oil. “Citizens” seems like a worthy enough cause, with a stated mission to educate citizens and officials about pragmatic, non-partisan solutions capable of producing affordable, clean, secure energy on a consistent basis nationwide.

Hofmeister is obviously not a big oil fan in his post-Shell days, but his views seem moderate and sensible. He enjoys a reputation as an “all-of-the-above” energy solutions advocate, promoting a very gradual, reasonable shift away from hydrocarbons while recognizing their absolute necessity until other alternatives become ready for prime time.

Finally, Hofmeister is the author of the 2010 book Why We Hate the Oil Companies: Straight Talk from an Industry Insider, which purportedly (I haven’t read it) “skewers both ends of the energy political spectrum, from ‘drill, baby, drill!’ conservatives to ‘no more carbon!’ liberals.” And he’s a member of the U.S. Department of Energy's Hydrogen and Fuel Cell Technical Advisory Committee.

Whatever your conclusions about the man, Mr. Hofmeister is out there predicting global consumption will reach 100 million barrels per day in 2020, coupled with $5/gallon gas. Beyond 2020, though, Hofmeister says this:

“I believe that with the right focus and development of the natural gas fuels market, we could begin to reduce global demand for oil… to 90, 80, even 70 million barrels a day over the next 2-3 decades, taking enormous pressure off chonic (sic) high oil prices.”

As the nearby chart shows, oil and gas prices did rebound fairly quickly last time, when the great global recession caused a massive crash. Once regular gasoline touched its lowest point of $1.61 in late December 2008, it steadily climbed until hitting $3.96 in May 2011 (less than 2 ½ years later). Crude oil prices followed a very similar path.

Admittedly, “this time really is different” than 2008. This oil crash was not caused by a Global Financial Crisis like that one was. I believe the main cause of this crash was oversupply compared to slightly softening demand. The oversupply, of course, was amplified by OPEC’s Thanksgiving announcement it wouldn’t curtail production. Regardless, presumably this whole crash could be quickly reversed by an uptick in demand (not unfeasible, given that consumers tend to consume more of something when it goes on sale) coupled with a temporary reining in of supply, which seems to be happening as we speak. 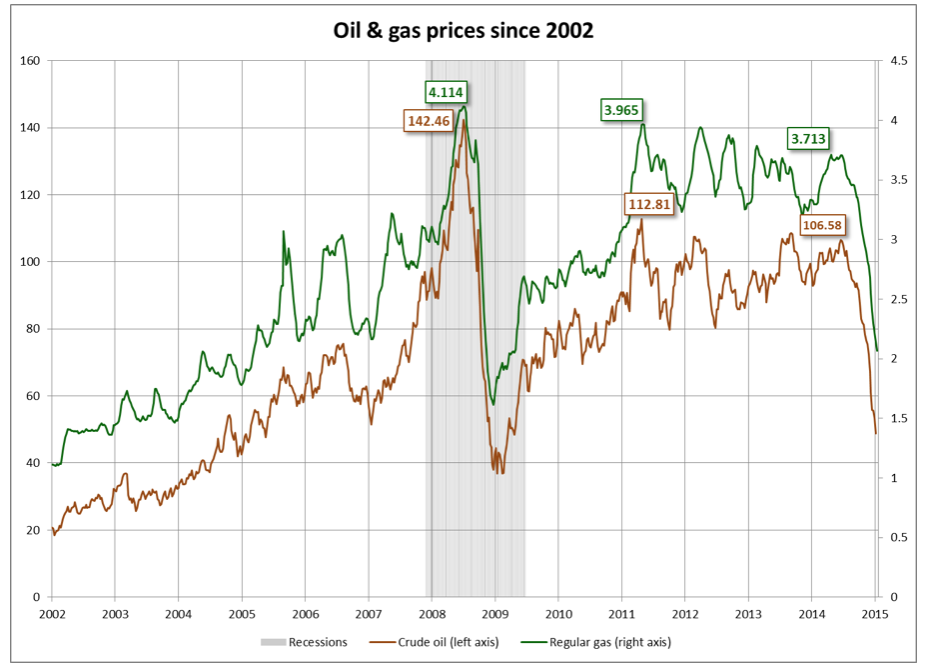 By the way, the video quotes current AAA regular gas prices at $2.04, and points out gas prices 1 year ago were $3.27. Now, the last time a gallon of regular gas was over $4 was July 2008, with 2 brief spikes above $3.90 occurring in 2011 and 2012. That historical perspective, to me, makes Mr. Hofmeister’s claim – and his wager – seem a bit dubious and even a bit outrageous. For what it’s worth, the EIA predicts US gas price averages around $2.33 this year and $2.72 in 2016. Hofmeister’s $4 handle would be a distant outlier compared to those forecasts; but we all know these are nothing but exactly that – forecasts. Obviously, no one really knows until we get there. (If you do know, contact either Mr. Varney or Mr. Hofmeister to place your $100 bet).

Hofmeister’s 2 reasons for believing gas prices will rise later this year are as follows (paraphrasing again):

1. Supply. Hofmeister cites the same 4-5% depletion rate I cited for traditional oil wells in my article last week. He then adds that shale well depletion happens at 30-40% rate. The net result: “We have to find 5 million barrels of oil (per day, globally) this year just to stay even.” Hofmeister reminds us the current global oil supply surplus is only about 1 million barrels per day, in a global economy that produces 92 million.

2. Supply again. The energy sector rigorously manages its own “cost structures.” Over 400 drilling rigs shut down in the US in about last 3 months, including “150 in the last 2 weeks.” Hofmeister also cites recent layoffs by oil-field services companies Schlumberger (SLB announced this week it laid off 9,000 in December) and Baker Hughes (BHI announced this week 7,000 layoffs of its own), among others.

Notice both of Hofmeister’s factors are related to supply issues. His reasoning doesn’t really rely on any uptick in demand.

In related news, Baker Hughes said in a conference call on Tuesday it expects the U.S. average rig count to decline 15% in the 1st quarter from the previous quarter. Bloomberg reports energy producers expect to cut spending in the U.S. by 35% in 2015 and reduce the number of oil rigs by 750, more than 40% of the total (source: Zacks). Finally, the International Energy Agency (IEA) last Friday projected supply reductions as well, by 350,000 barrels a day in 2015.

In case you’re thinking of placing any “$100 bets” (or investments, which would undoubtedly involve more than $100), consider these next few points.

First, MarketClub triangles have not yet turned green for the vast majority of related commodities or energy stocks, indicating the overall trend remains down… or at least, a new uptrend has not yet confirmed. For underlying February crude, though, Adam Hewison’s Monday morning note indicated this:

“Stochastics and the RSI have turned neutral to bullish signaling that sideways to higher prices are possible near-term. Closes above the 20-day moving average crossing at 51.35 are needed to confirm that a low has been posted.”

Citigroup analyst Tim Evans told the Wall Street Journal last Friday he doesn’t see an investable opportunity in crude just yet – not in the next 6 months or so anyway. Said Evans:

"The problem is that we're still facing a very substantial surplus for at least the first half of 2015. You're still just a very long way from a tighter balance that would mean inventories stop rising or actually go down. If the next downtick in global petroleum inventories is not until July, then I don't see any reason to be long these markets today."

My two cents: wait for some market confirmation. But be ready.