The end of January brought worrisome signals to the metals' bulls and I want to show you where Silver and Palladium failed to sustain growth and why.

Silver Is In A Downtrend

Let's start with Silver, as it's more liquid and therefore more interesting. Below is a weekly candle chart. I started my metals posts from an overview of a monthly time frame and now I am digging deeper into details using a weekly period. 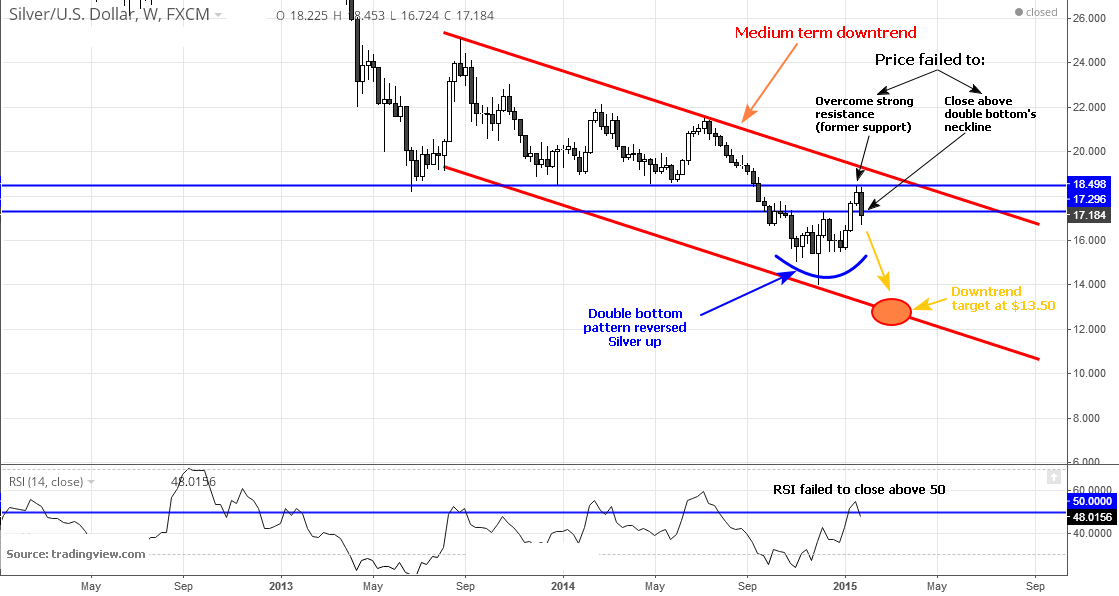 The medium term trend is bearish. At the end of 2014, Silver managed to stop a free fall that started above the $21 level. Price sculpted a double bottom figure (highlighted in the blue semicircle) in the $15-18 range. This pattern reversed the market up, technically the progress was sustainable as both neckline resistance at $17.3 and the left peak of the model at $17.8 were broken and only former hard support at $18.5 put the wall up for this short term bullish run. Failure was also detected on the RSI where the indicator couldn't gain a foothold above the important 50 level, therefore further weakness is expected. The medium term target for bears is located at the downtrend's trough at $13.5, that is a $3.68 gain or 21% from Friday's close.

Palladium Is On The Edge Between Uptrend And Flag Breakdown

Next on the table is Palladium. You have the same weekly candle chart for your attention. 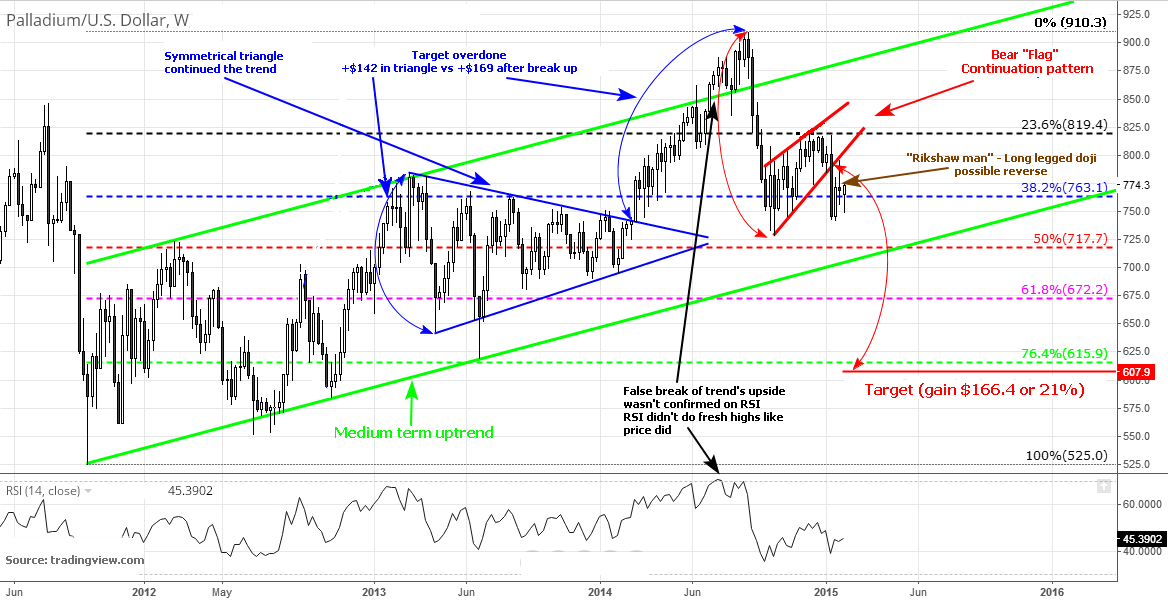 From March 2013, Palladium shaped an interesting symmetrical triangle pattern (highlighted in blue), this figure can be either reversal or continuation. In our case, we see that one year later in March 2014, the triangle continued an upside move with a break up. The target for this triangle computed as follows: the height of the triangle is equal to $142 and is added to the breakout point at $741, to equal $883. The price had overdone the target and reached a maximum at $910. What is most valuable from this situation, as it's just history, is that the triangle's impulse was enough to break above the trend's upside. In other words, the pattern outweighed the trend's power, although the break was false as shown above. The RSI didn't reach new highs on this move and at the end of the day the trend put its order back into rule.

Price closed on a monthly basis below the long term uptrend downside at $800, which I described in my December post, even though the medium term trend (highlighted in green) is still bullish, showing mixed signals. What else undermines the bullish view? I highlighted in red my favorite chart pattern called a "flag", showing a bearish continuation model. I like it for an almost 100% predictable outcome. When you see such a pattern, be ready to act once it has been broken. How do you benefit from it? First we should find the "flagpole", which is the height between the previous peak, $910.3, and the trough, $728.2 (highlighted in a left red double arrow), which equals $182.1 and then subtract it from the break down point of the flag, $790 (distance to target is highlighted in a right red double arrow), our target is located at $607.9 (790-182.1).

Three weeks ago, the price of Palladium broke below the flag's support and fell to the $743 level. Two weeks later, it made a pullback to the $797 level, exactly to the broken support area which shows an ideal technical confirmation of the model. This pullback closed last week indecisively, as open and close are at almost the same levels and it shaped another interesting candle called "rickshaw man" or long legged doji. This one is a possible reversal sign for the recent throwback.

Overall, the situation is mixed, the long term uptrend is broken, the medium term trend is bullish and the price is right in the middle of it. The short term signal is bearish as we see the recent fall from the $910 peak is going to continue by the flag pattern. One can try to benefit from the short term sale of Palladium at its current price ($774.3) with a target just above the trend's bottom at $707, but you should cut it once the price breaks above former support at the $800 level. Risk is 3% versus potential gain of 9% (1:3).

Move your stop to breakeven when you see Palladium below $750. Below $700, you can start being greedy and move your profit target to the flag's aim at $607.9 as signals are mixed.

3 thoughts on “Metal Tactics: Short Silver and Palladium With A Tight Stop”