Hello traders and MarketClub members everywhere. We are rapidly approaching the end of the first quarter and zero hour in Geneva. It remains to be seen what agreement, if any, comes out of the nuclear agreement with Iran. I'm doubtful that they will get an agreement done today and that their request for a July 1st deadline is going to be a major hurdle as well. That is why I say Q2 could be very interesting. 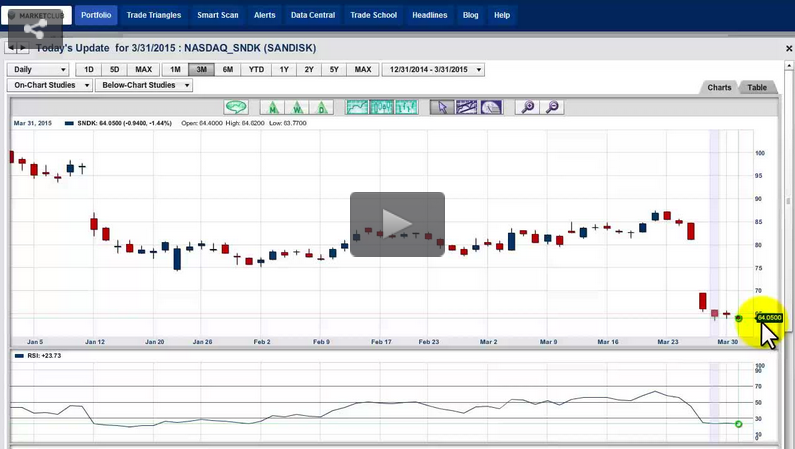 Q1 saw the rise of the Arab coalition army and the fight for Yemen. Where that ends up and how it affects the market is a big unknown at this time. Rest assured, I will keep you abreast of how markets are acting and reacting to the global political news.

Today, I'm going to examine the trades I looked at on Friday with the "52-week high on Friday rules" and see how they worked out. These trades would have been exited today with either a profit or a loss, but you would be out of the trades.

I'll start with the two short positions. If you watched Friday's video, you would see that I looked at two stocks that were acting rather dismally. The first was Philip Morris International, Inc. (NYSE:PM) and the second stock was SanDisk Corp. (NASDAQ:SNDK). I did not take a position in Philip Morris because it rallied later in the day and closed higher for the day. The stock of Philip Morris did not close near its lows for the day, which is one of the rules when shorting a stock for the weekend. On the other hand, SanDisk did close near its lows, and I took a short position in this stock at $64.60.

On the other side of the coin I took long positions in the following stocks:

All of these positions were exited on the opening Tuesday morning, as per the rules of this particular strategy.

Looking at how the markets performed in Q1, the S&P 500 and the Dow were pretty much flat, while the NASDAQ was actually a bit higher for the quarter.

Gold (FOREX:XAUUSDO) had some amazing swings in Q1, but is pretty much closing out Q1 flat. Be sure to check in tomorrow as I have a special report on gold that I think you'll find amazing in terms of what I expect in Q2.

Crude oil (NYMEX:CL.K15.E) continued to move down and everyone who drives a car in America were big winners at the pump.

The one bright spot in Q1 is the dollar which soared to its best levels in almost a decade against the euro. How this is going to affect exports and doing business overseas remains to be seen.

As always, I appreciate all of your feedback and comments that you leave on any of my videos and blog postings.

Q1 is over, roll on Q2, and don't forget my special report tomorrow on gold!