11 days ago I published a special report on Apple which you can read here. In that report, I stated that a low period should occur either on Friday or today. The fact that a buy signal triggered for Apple today indicates that the low period has passed and we should see Apple move in a positive mode for the next 23 to 28 days. Apple is expected to announce earnings of $2.13 (consensus) after the close of business on the 27th; that's approximately 14 days from now. Let's go with the flow and see if this pattern works out. 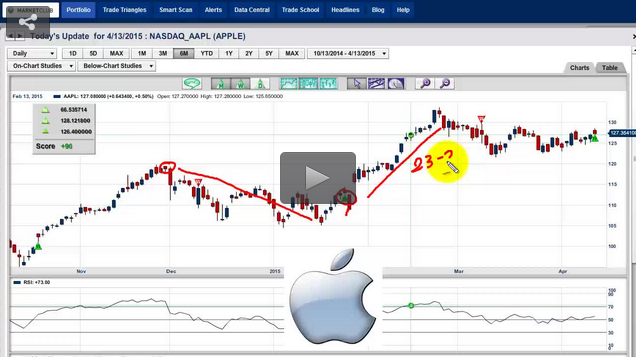 The weak euro and the thought of quantitative easing have driven up European stock markets over 25% for the year whereas the U.S. markets are up approximately about 2% for the S&P 500.

It is inevitable that interest rates are going to go higher, it is just a question of when. Right now, I believe that the Fed is caught between a rock and a hard place. The Fed appears lost and rudderless, and they do not know how to exit graciously from this grand experiment of printing money for the last several years. Couple that with the upcoming general election and the shenanigans that are going to go on with that charade and you have a very mixed economic picture.

Why can't we hold elections like Canada and just have X months to run a campaign. Everyone announces they are running at the same time, and the race goes on for a period of maybe three or four months. Here in the states candidates for president start running years ahead of the general election. It is insane and a waste of money and time. If a candidate cannot articulate what they stand for in a couple of sentences they should not be running anyway. Rant over!!!

Gold corrected itself from overnight gains and appears to be building a recovery base, it just needs to have a daily signal to kick in to get bullish again. For the next couple of days, if gold moves over the $1210.68 it will kick in a daily buy signal and gold will resume its upward trend.

Crude oil kicked off the week with a daily buy signal indicating that it could still move higher. Whether one believes the fundamentals or not the market has been trending higher from the $40 level. As I say here at MarketClub be a lover and not a fighter and go with the flow, you do not want to fight the trend.

On the Eurodollar, all the Trade Triangles are negative, indicating that the trend is clearly set to the downside. I would not be surprised to see the euro test the lows that were seen on March 15 at 104.56. This trade is very crowded on the short side of the euro, and there are very few people who are long the euro. CAUTION: You may see a short covering or dead cat bounce from the 104.56 level. If you're in this trade on the short side, you may want to put tight stops on to protect your profits.

It's a start of a new week with lots of opportunities. Let's see how Apple plays out and if gold gives a buy signal this week.