Nothing makes financial markets more skittish than the threat of a rising rate environment. The Fed removed the word “patient” from its statements and though the exact timing of the increase is still up for speculation, an interest rate increase of 0.10% to 0.25% is a certainty this year.

Higher interest rates might not seem like a positive thing for stocks – higher rates mean less money available for investment growth by businesses – but that's not true across all sectors. For life insurers, rising rates mean more profitability.

Life insurance companies must hold a large amount of its assets in liquid form and are subject to strict regulations as to how that money can be invested. Conservative asset classes like bonds, treasuries, and money-market securities are the only types a life insurance company can invest in. Liquidity is a key component of this industry as the company must be able to meet its policyholder obligations when a claim is made.

Over the past several years, the historically low-interest-rate environment has placed added pressure on life insurers to make a profit. Margins have been low and many have struggled to stay afloat. The effect of this was made evident by AIG's recent fiscal year 2014 earnings report showing a huge drop in pre-tax operating income from its life insurance segment – $80 million versus $215 million year-over-year.

Faced with rising rates though, these companies will stand to make better returns on its investments and widen margins. The top two competitors in this segment, MetLife (MET) and Prudential Financial (PRU) stand to lead the way. Rates have already begun creeping upwards and both companies stock has risen to levels that haven't been reached in nearly seven years.

An insurer with building momentum

Prudential Financial (PRU) is a $36 billion life insurance company with a lot going for it. It operates internationally, although the majority (over 60%) of its income is driven by the U.S. market. The company has been making a number of acquisitions overseas, primarily in the Japanese marketplace, which is also helping fuel growth.

Take a look at how the stock has performed so far this year. 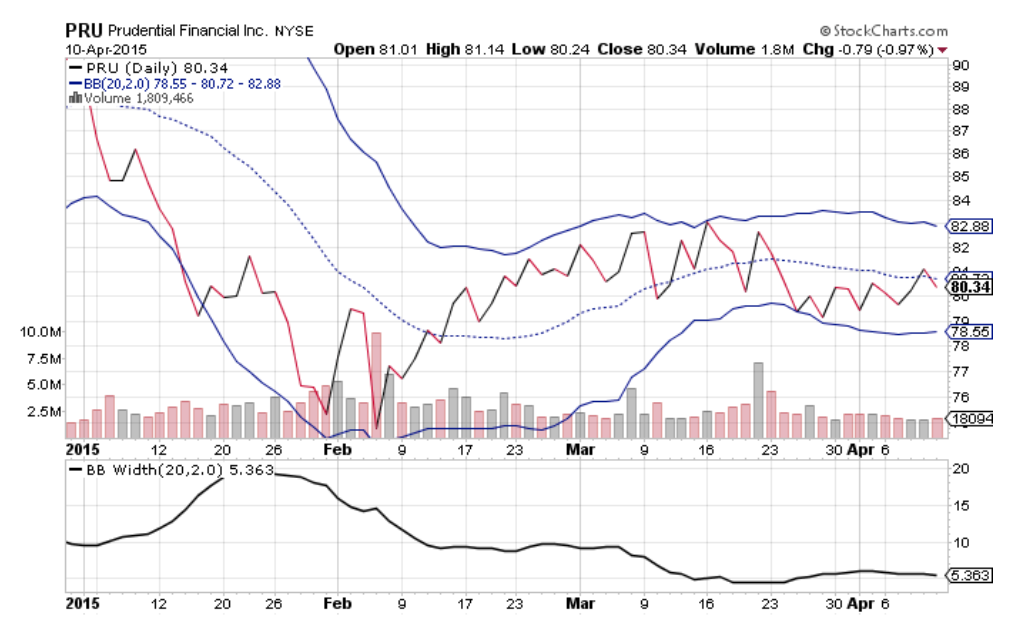 It's down over 10% year-to-date, but notice how narrow the Bollinger band width is getting. The falling figure is an indicator that a squeeze could happen sometime soon and boost Prudential's stock price in the process.

Fundamentally, Prudential looks strong as well. The stock is trading at just 8.8 times earnings with a long-term EPS growth rate of 14.9% giving it a PEG ratio of less than 1 – a strong indicator that the stock is undervalued. The life insurance industry average for P/E is 18.7 with an EPS growth rate of 10.9%. If Prudential traded at that average multiple, the stock would be fairly valued at an astounding $181 based on 2015 earnings estimates. At just 10 times earnings, the stock would be worth $97.

Investors also get downside protection in the form of a 2.9% dividend yield. With a dividend payout ratio of 68%, Prudential has plenty of room to keep paying its dividend and even raise it further.

Plenty of upside value for MetLife

MetLife (MET) is one of the largest life insurance companies at $57 billion. It also operates internationally with a recent strategic focus on emerging markets. By 2016, the company plans on deriving 20% of its income from emerging markets in Latin America, Asia, Europe, the Middle East, and Africa.

Year-to-date, the stock is down just over 4% but like its biggest competitor Prudential, the chart shows a potential squeeze forming based on the bollinger band width. 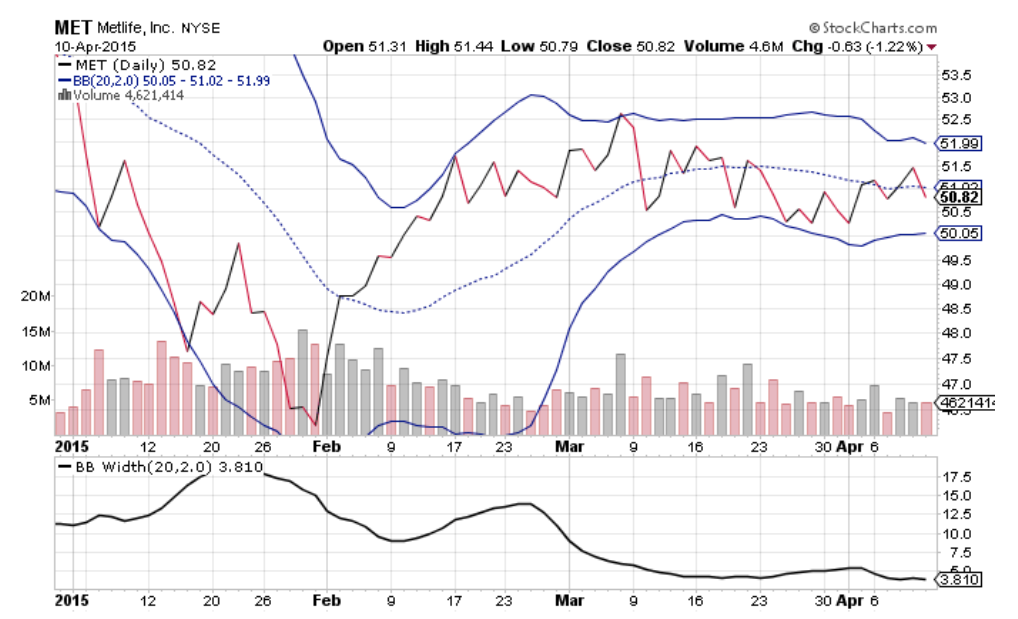 In the past month, volatility has dropped precipitously which could mean that a potential breakout may be overdue.

MetLife is fundamentally similar as well. The stock trades at just 9 times earnings although the long-term EPS growth rate lags somewhat at 7.3%. Traders are looking for a rally in the stock price however. Last month, option call buying was quadruple what it was in February, sending a message that investors think the stock is headed up.

A dividend yield of 2.7% offers investors an additional incentive to own the stock and its extremely low dividend payout ratio of 24% gives MetLife ample room for future dividend increases. As interest rates go up, look for MetLife to boost its yield to attract more investors.