As a dedicated value investor, I'm always on the lookout for well managed companies with a strong product and solid fundamentals that have temporary problems that knocked its stock price down. By focusing on the long term outlook, you can find great stocks at deeply discounted prices for reasons that may no longer apply come next quarter.

The stock I'm talking about is Harley-Davidson (HOG). This $12 billion motorcycle manufacturer is an American icon and one of the most recognizable brands on the planet. The company also reported disappointing results in its latest earnings release and the stock tumbled down around $6 -- just shy of its 52-week low. 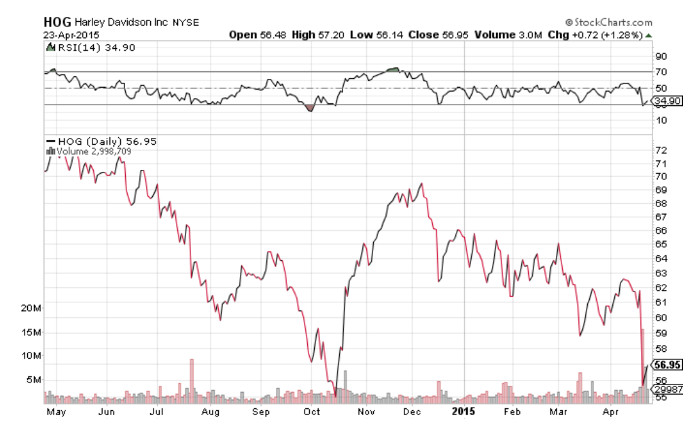 The stock might have taken a hit, but it looks oversold based on its RSI of less than 35. Harley is down 13% year-to-date but interested investors might want to think about swooping in now while the stock looks cheap.

In the company's first quarter earnings report, management lowered full-year guidance citing increasing pricing pressure partially driven by the strength of the U.S. dollar relative to foreign currencies. Still, the total number of units shipped in the first quarter came in at very low end of expectations – 79,589 units out of an expected 79,000 to 84,000 range. Based on that data, Harley expects to ship around 276,000 to 281,000 units for 2015. That gives the company growth of around 3% from last year, but short of the 5% growth originally expected.

So what exactly happened in the first quarter to make Harley miss? Revenues fell 3.9% to $1.51 billion and unit sales fell 1.3% on increased competition. Despite the pressures the company faces from a strong dollar, it hasn't reduced pricing on any of its brand-name Harley-Davidson motorcycles. It's caused international shipments to drop 2.4% with Harley now holding just 9.8% market share in Europe versus the 11.1% it held last year. In the U.S., market share fell 5% but still leaves Harley in first place at 51%.

The stock fell on the disappointing first quarter results but fears of Harley struggling for any length of time may be overblown. Even though the company kept pricing high amidst a difficult sales environment, it also kept margins high. Operating margins improved 80 basis points to 22.9% from last year while gross margins are above 40%.

The real winner for Harley though has been its financial services division. Revenues for the segment rose 5.2% to $162.4 million while it enjoys relatively high operating margins of 39.8%. Thanks to Harley's aggressive financing operations and widening margins, Harley was able to increase earnings by 1.5% to $269.9 million. Harley's internal auto financing division has been a real success story for the company with around 42% of revenues being generated from sales financed through Harley itself.

If the dollar begins to lose strength, that could allow Harley to post an earnings beat for the next quarter and revise guidance expectations higher. Investors don't have to rely on currency trading to benefit from Harley though. The company has been repurchasing shares on a consistent basis reducing share count and improving revenues per share around 4% annually since 2005. Harley also comes with a dividend yield of 2.2% which helps to buffer investors against downside risk, although it looks as if that has already been priced into the stock.

At it's current valuation, Harley looks like a bargain buy. Even using the most conservative EPS growth estimates when combined with the stock buybacks that equate to a 4% gain and the 2.2 dividend yield put the stock at a potential 13% gain. If the dollar falls and sales improve, Harley could be undervalued by a good deal more.