This week both the NASDAQ and S&P 500 made new all time highs and in doing so turned the Trade Triangles back to the positive mode on both indices.

Well here we are, it's Friday, and the question is. Is this trend going to continue? I say yes, at least for now. 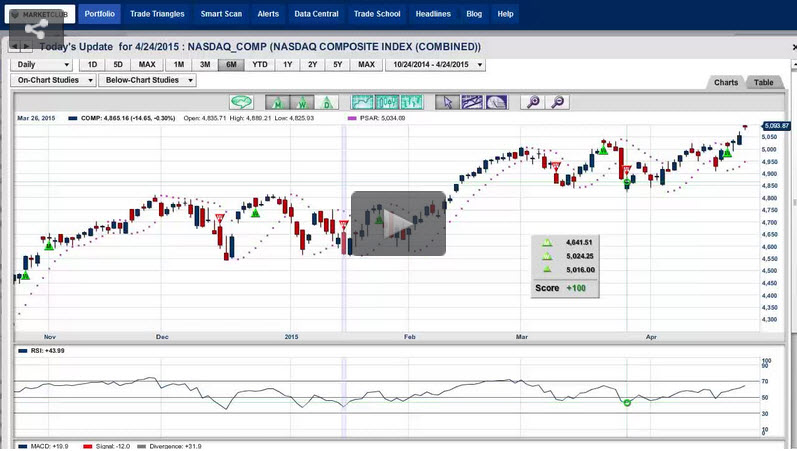 The only index that has not joined the party is the Dow. The problem with the Dow is that it is made up of just 30 stocks big stocks who are not seeing much growth as of late and have been somewhat hurt with the strong dollar. Unlike the NASDAQ and the S&P 500 which are much broader indices and offer a bigger cross-section of growth stocks.

Yes, I know there are lot's of problems in the world and they're not likely to be cleared up anytime soon. However, the only game in town right now is trading stocks from the long side until the party is over. When will it be over? Well, I'll leave that to the Trade Triangles to tell me. The reality is most markets including stocks tend to swing too far on the upside and downside. At the moment, the line of least resistance for stocks is to the upside.

I haven't talked about Greece lately so it felt like I would share my thoughts with you on that subject. Greece is going to default plain and simple, there is absolutely no doubt in my mind about that fact.

The ECB and the Euro Zone have had their collective heads buried in the sand and when they do take them out to look around they have to face the truth and just can't kick the can down the road again. Greek citizens have said they've had enough with austerity and want no more of it.

Bottom line, Greece is not going to pay back the money they owe. Why should they, they haven't done it so far so why start now. I think their philosophy is we have survived for 2000 years and we will survive after the ECB and the Euro Zone is out of business.

Let's face it, Greece is a beautiful country with beautiful islands in the azure blue Aegean Sea. The Greeks are in a deep financial hole. It is so deep they are never going to dig themselves out of it, end of story. My advice to the ECB and the Euro Zone is let Greece go and move on.

Here is an interesting thought. What if when Greece leaves the euro zone? Will the euro get stronger? Everyone thinks the reverse will happen and the Euro will get weaker, but I think with the right technical set up the Euro could get stronger. If the ECB kicks out a weak member in this case Greece maybe that will be viewed by the world as a positive step.

It's not unlike how the major stock indices work, weak stocks get kicked out if they fall below the exchange financial standards. Look no further than the Dow which just included Apple and kicked out AT&T a well-known stock. So maybe getting rid of Greece will be seen as a positive move for the euro, who knows?

As always I will be looking at all three of the major indices, plus gold, crude oil and the U.S. dollar.

Have a great weekend everyone.