Some companies set the example for how a business should be run. It keeps debt liabilities low, stays on top on dynamic changes in the marketplace to avoid unnecessary risks, and gives back to its shareholders on a consistent basis.

One consistently overlooked market is regional banking. Investors looking to add financial exposure often identify larger national brands leaving these smaller competitors to operate in relative obscurity. Analysts treat regional banks in much the same way – most have little, if any, analyst coverage at all. Savvy investors know that this is actually a good sign. Unknown stocks are often undervalued gems hidden away behind the cacophony of Wall Street.

It's not just about identifying mis-priced equities though. With the upcoming Fed interest rate hike, regional banks along with their larger counterparts will see opportunities for better margins and higher earnings. Spreads between loan and banking products will widen while consumers that have been paying down debts since the financial crisis in 2008 are beginning to look forward rather than back with the banking industry expecting around 5% consumer loan growth this year.

First Financial Bankshares (FFIN) is a $1.9 billion southwest regional bank operating throughout Texas. Despite being in the heartland of oil and gas companies during the global collapse of oil prices during the past nine months, this bank has not only managed to alleviate excess risk, but beat earnings expectations at the same time. Management noted in its quarterly earnings statement -- “In light of the current depressed oil and gas prices, we continue to monitor our direct exposure to the oil and gas industry, which has remained at approximately 3%, consistent with the 2014 year-end balances."

Since February, the stock has been on the rise and could be poised for a breakout as the 50-day moving average threatens to overtake the 200-day. It's flat year-to-date, but has climbed nearly 15% in the past quarter.

The company reported an earnings beat for the first quarter of $0.37 per share versus the $0.36 expected by the 9 analysts covering the stock. Year-over-year, earnings were up 7.44% and net interest income increased 8.32% from $47.17 million to $51.10 million. The successful quarter led management to announce a dividend increase of 14.29% to $0.16 per share beginning July 1st effectively giving the stock a dividend yield of 2.1% putting it on par with the yield on the 10-year treasury.

First Financial is acquiring Conroe Bank to expand its business portfolio as well. Investors should note that the purchase is being financed entirely through common stock allowing the bank to keep its balance sheet clean and avoid taking on debt. As it stands, the company has no long term debt liabilities while holding more than $2.8 billion in cash reserves.

It's not the only thing on First Financial's shopping list though. It announced the acquisition of 4Trust Mortgage a few weeks later this time for $1.9 billion in cash. Adding to the mortgage segment should be a huge revenue driver for the bank as it saw a 39.36% increase in mortgage fees year-over-year.

A southeastern competitor on the rise

Trustmark Corporation (TRMK) is a $1.6 billion southeastern bank headquartered in Mississippi but has operations in Tennessee, Texas, Alabama, and Florida as well. It reported first quarter earnings of $0.43 per share beating estimates of $0.39 per share.

The stock hasn't moved much since the 50-day moving average passed over the 200-day in April but could be on the verge of a major squeeze as evidenced by its falling bollinger band width. 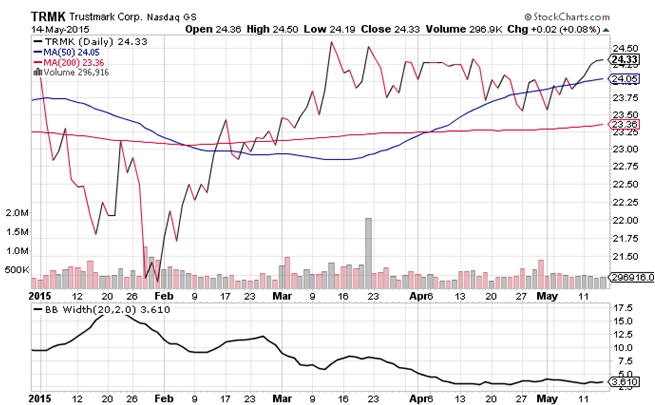 The stock trades at a discounted 13 times earnings and comes with a relatively high dividend yield of 3.8% making it an undervalued asset. Like First Financial, Trustmark has a strong balance sheet with zero long term debt liabilities and cash holdings of more than $3.8 billion giving it the ability to make acquisitions without taking on debt. Look for Trustmark to be in the market for a major purchase at some point this year.