Gold is a unique asset class, despite being uninteresting from a volatility investing perspective. I mean, it's currently sideways amid a soaring equity and dollar value, but it is still interesting for selected market participants for its safe haven status and diversification purposes.

We all have different time frames that we use, common investors use daily, weekly and monthly charts and the quarter to year perspective when they summarize the profits or losses. And so do the public companies when filing their earnings reports every quarter. And for these type of investors, Gold's dynamics in recent years have been frustrating as it is has been totally unmoved month by month, making investment unpromising. 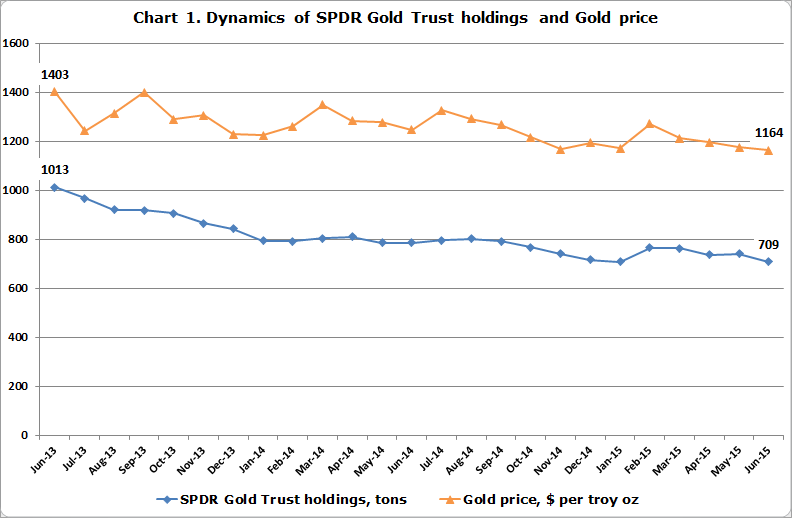 On the above monthly chart, tailored especially for INO.com readers, I want you to see for yourselves the direct relationship between Gold prices and the demand for ETF holdings. For 2 years as depicted on the chart, Gold lost 17% of its total value. Meanwhile the SPDR Gold Trust holdings lost 22% of its total value, almost matching dynamics. The holdings fell even more than the Gold price did telling us about worsening investors' sentiment for Gold. Remember the old words that "the Fear has a large shadow". The holdings were falling, gradually neglecting upswings in the Gold price, and only this January did the holdings pick up from 709 to 763 tons amid Gold's price growth from $1172 up to $1273. But this outstanding move proved to be short-lived, and both indicators fell back to the lows.

On the contrary, the central banks are buying Gold despite the sideways market. 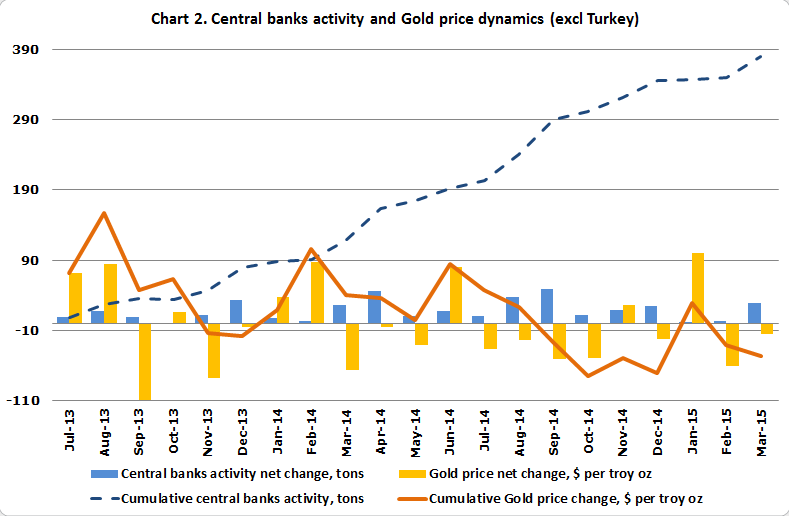 On the chart above, I combined several indicators for you, detailed month-to-month net change, and broader view cumulative dynamics. The central banks' activity net change was negative only once in 2 years, and it was in October 2013 when the outcome was -1.1 tons amid the sharpest $109 month-to-month Gold price decline in September 2013.

During periods when the market experienced large Gold price falls, the central banks' activity was slightly positive. The same was true when Gold has been surging. The largest purchasing activity was conducted in September 2014 with a net change of 49.4 tons; Gold prices fell $51 at that time. Most of the rest of the time reserves grew moderately in stable market conditions. It looks like the central banks prefer to fish on the still water.

Overall cumulative dynamics doesn't show any impact of the central banks' activity in the market. Total net purchase for 21 months is equal to 380 tons (1% of current total world gold reserves) but despite that, the cumulative net change of Gold's price was negative, $-46. And if you compare Chart 1 and Chart 2 you will find that the decline of SPDR Gold Trust holdings was almost balanced by the central banks purchases: -205 tons (968-763 tons July 2013 thru March 2015) versus +380 tons.

Below are the top 10 countries ranked by amount of Gold reserves just for your information on current Gold power status. 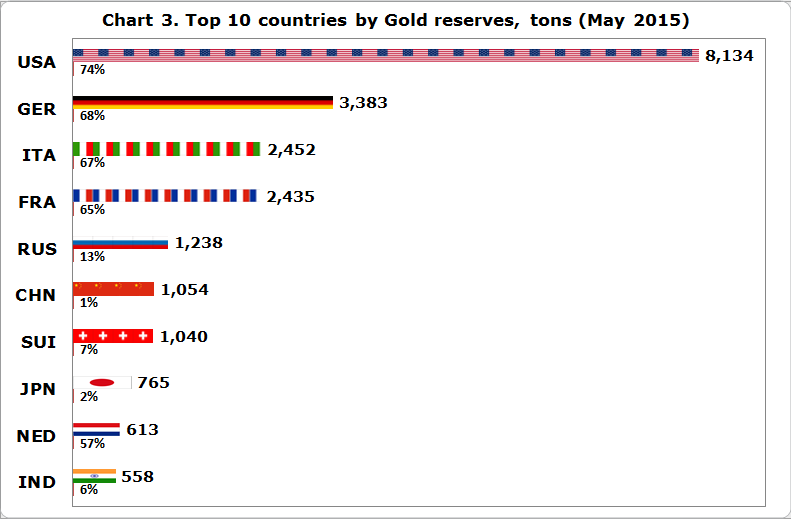 The U.S. is the leader, and the other countries are far behind, even second-ranked Germany holds more than 2 times less Gold reserves. Below the flags you can see the percentage of Gold in each country's total foreign reserves. It is worth noting that the U.S. and European countries which issue top reserve currencies (USD, EUR) have the largest percentage of Gold in their foreign exchange reserves. They don't have a reason to hold currencies they emit, therefore; they need something more reliable, and it's Gold.

In my previous posts, I already compared Gold's dynamics with the US dollar and its counterparts that were believed to be the strongest factor. But as we found out, Gold is not reacting to this factor anymore. Today we found out that central banks, large market players, didn't move Gold either. The technical picture is not trending, the market is trapped within the $1100-1300 thin range. What else? Money printing – among the top buyers are former Soviet countries and they buy Gold for local currencies, printing them, and Gold is still there unmoved. Deflation? Yes, Gold is a perfect asset when either inflation or deflation persists as it just keeps the value, but still, there is no trending dynamics. Even the threat of a decentralized multi-polar world doesn't move it.

I hope that sooner or later we will know the answer. In the meantime, I will keep searching.