It started in the Far East and was immediately picked up by the European stock markets with many of them soaring over 3% for the day. All of which was overshadowed by the Athens Stock Index which was up over 8%. Can anyone say happy days are here again? 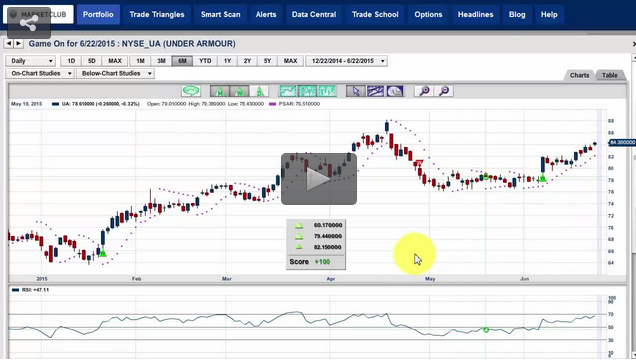 It would appear to this observer that the world wants a positive outcome from this self-induced Greek tragedy.

Last week, on Thursday to be exact, you may remember buy signals were triggered on the S&P 500 and the NASDAQ based on the Trade Triangle technology. That signal did not apply to the Dow which remains a laggard. The Dow could join the S&P 500 and the NASDAQ should it trade above 18,169 this week. As of this writing, the DOW is about 30 to 40 points away from giving a buy signal based on the Trade Triangle technology.

With the NASDAQ at new highs, it is clear that this index is reflecting the new economy while the Dow, represented by some of the largest companies in the world, is becoming passe and not the place for growth at the moment.

Many of the stocks that I have talked about in the past week or so are doing very well and I expect those trends to continue in a positive fashion.

What was good for the equity markets proved to be a negative for gold which is once again on the defensive. This market continues to be trapped in a very broad trading range since about the beginning of the year and should only be traded on a short-term basis.

Crude oil has also been languishing in a sideways market for the past six weeks and is showing some early weakness today. However, the major trends and intermediate trends for this commodity remain in a positive mode based on the Trade Triangle Technology. I still want to approach this market from the long-side with adequate money management stops based on the Trade Triangles.

The Euro, which bottomed out against the US dollar in March of this year, is just now flirting with the 1.14 level. This is an extremely important area to watch as a move over the 1.1464 level will turn the monthly Trade Triangle positive giving it three green Trade Triangles. Once through the 1.1465 area, I would not be surprised to see the Euro trade at the 1.20 level in a matter of weeks. But first, let's get over the 1.14 area.

I believe that this week we could be writing the final act in this Greek play. Either way, it's going to be a very interesting week indeed and one not to be missed!

One thought on “Optimism For Greece - Can It Last?”