The FOMC meeting ended yesterday as many had expected. Besides some marginal tweaks in the language, the message remained the same; data will determine our rate policy. Now, hours after the latest US GDP figures hit the newswires, it seems that Dollar Bulls are gearing up towards a September rate hike. Part of their rationale is because the data is good enough to sustain a rate hike. And that’s essentially true. With wages growing annually at 2%, Core Inflation at 1.7%, unemployment at 1.8% and now GDP bouncing back, indeed, a rate hike is warranted. At the same time, there are essentially no signs that the US economy is overheating. Rather, we’re seeing notable signs of stabilization. This, then, begs the question: How many rate hikes can the US handle in the upcoming year?

No Escape Velocity in GDP

When we examine the dynamics of GDP growth, it’s evident that the US GDP growth rate is not breaking the range. Instead, it has the same cycles that tend to end around the 3% growth rate. After that, the US economy tends to decelerate, only to regain momentum later. But this range of growth has not been broken. This means that there’s no evidence that US GDP is at escape velocity, a pace which would require several rate hikes a year.

No Escape Velocity in Inflation

When we examine US Core Inflation, a similar picture emerges. US inflation is within the Fed’s 2% range and is showing no signs of overheating, i.e. escaping the Fed’s target. Rather, every time it reaches the 2% range, it tends to cool and then slide slightly lower.

When we examine wage growth (YoY), wages are growing at around 2% annually, which is fine. But that is the kind of wage growth that produces a 2% inflation rate, more or less where we are now. There are no signs that wages are accelerating above 2%, and with a low participation rate, that
might take significantly more time. 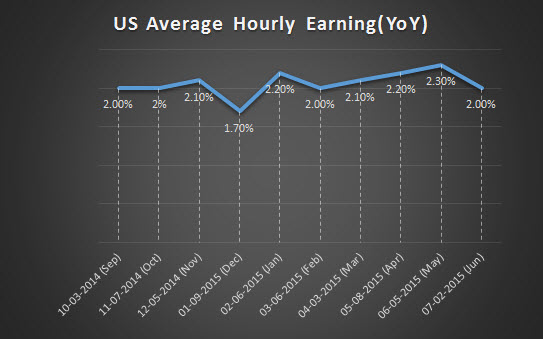 What this Means for Interest Rates

Don’t be mistaken; the numbers are pretty much okay. The US probably does need a rate hike and maybe another one next year. But growth doesn’t seem to be overheating, inflation is and continues to look steady at or below 2% with wages are moving in tandem. That means that everything is in check and there’s no need to slam on the brakes. In other words, there’s no need for the Fed to cool down the economy.

With that in mind, and still no other evidence, it’s hard to see more than a single rate hike this year and perhaps one other in 2016. With that said, that’s pretty far from some speculation, i.e. a 25 bp rate hike every other month in 2016. But as you can see from interest rate swaps below, the money market holds the former view. That is, no more than two rate hikes in the coming year. And that is simply because more than that is not needed.

6 thoughts on “How Many Rate Hikes Can The U.S. Handle?”