Certain stock sectors tend to underperform others as part of the business cycle. Investors have known about this phenomenon for decades and cyclical industries like industrial goods have a well-established track record of ups and downs. Occasionally, these stocks find themselves at the bottom of their cyclical curve and suddenly have nothing but bad news priced into the stock. That can leave them deeply undervalued with a lot more upside potential than downside.

Industrial manufacturing production has fallen this year with projected growth of just 2.5%, partially due to the slow start in the first quarter thanks to adverse winter weather conditions. However, with the economy posting improving data, those figures could be revised upwards as the year progresses. With the lower expectations already priced into the manufacturing industry, stocks look to be at tremendously discounted prices.

One stock could be calling a bottom as the stock hovers near its 52-week low. Several analysts recently downgraded the stock, which is a contrarian sign for value investors. Analyst rating changes are generally lagging indicators of a company. Factor in recent insider buying and there could be a reason to go against the trend and take a closer look at this stock.

A metal fabricator that looks too undervalued to be ignored

Allegheny recently reported disappointing second quarter earnings results with a loss of $0.15 per share compared to the expected profit of $0.04 per share. It's the second quarterly drop in a row after a beat in the fourth quarter for 2014. The news prompted a flurry of downgrades by analysts covering the stock.

Deutsche Bank kept its "hold" rating for the stock but lowered its price target from $33 to $27 while BofA/Merrill Lynch downgraded the stock from "buy" to "neutral." The stock didn't take the news well either plunging more than 37% in the last quarter.

However, it doesn't appear that any good news has been priced into the stock which gives savvy value investors an opportunity to take advantage of a mid-priced equity.

If we take a look at Allegheny's chart, we can see how the stock has taken a tumble recently. 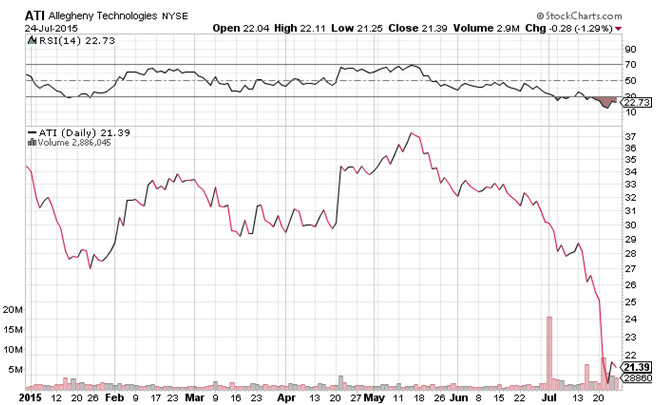 Notice how the stock hit a low earlier this week and has bounced off of it slightly. Following the miss, trading volume appears to be getting back to normal which could mean the stock is leveling off here. However, take a look at its incredibly low RSI rating of just 22.73. Such a low value could indicate that the stock is highly oversold presenting an opportunity for gains in the near future.

One of the best indicators of a turnaround can be found by watching insider transactions. As directors of the company, it's believed that they know more about their own company than any analyst covering it could. Any positive insider buying means that management is putting their own money at stake and could indicate a positive trend is on the way.

It's not just for show either. Taking a closer look at Allegheny's fundamentals after the fall, there are some strong positive takeaways. The stock is trading at a forward P/E of 13.2 while earnings growth is estimated to be 15% next year. That gives the stock a very attractive valuation right now. Factor in the stocks dividend yield of 3.3% and this stock begins to look too cheap to ignore.

Even with the lowered price target by analysts, the stock is still trading at a discounted price – a whopping 26% lower. And that's not taking into account any positive news either meaning this stock could be severely undervalued right now.