It's only the middle of the year, but we've already seen quite a lot, even for the seasoned investor.

The Swiss National Bank (SNB) kicked off the ball in January for what has proven to be a nightmare year thus far. It's caused a lot of tears and fears among investors, some of them went bankrupt in one day after it let the franc go.

Greece and it's possible leave of the single currency zone has been dubbed the "Grexit." It's added turmoil to the markets over the last month with currencies crosses opening with gaps on the last two consecutive Mondays. The single currency zone has never been so vulnerable from the day of its launch, as Greek precedent can find followers and bring Germany a lot of headaches furthermore.

The United Kingdom also played its role with the Queen's speech this May containing words of possible divorce with the European Union in 2017, which was named "Brexit" (Britain's exit) a la Grexit.

All of the cases mentioned above are episodes of the world currency war and the first prey of it is the European single currency that has been damaged a lot.

I've heard an idea of a possible shift of safe haven status from the Swiss franc to the British Pound due to increased volatility of the franc. This has come about due to uncertainty about further franc behavior caused by unpredictable steps of nervous SNB, including such severe measures as capital control, which can distract investors from the franc.

That is the main reason I wanted to prepare today's post and make my own independent comparative chart analysis. The best way to do this is to compare all possible safe haven rivals with the main asset of safety, which is Gold. 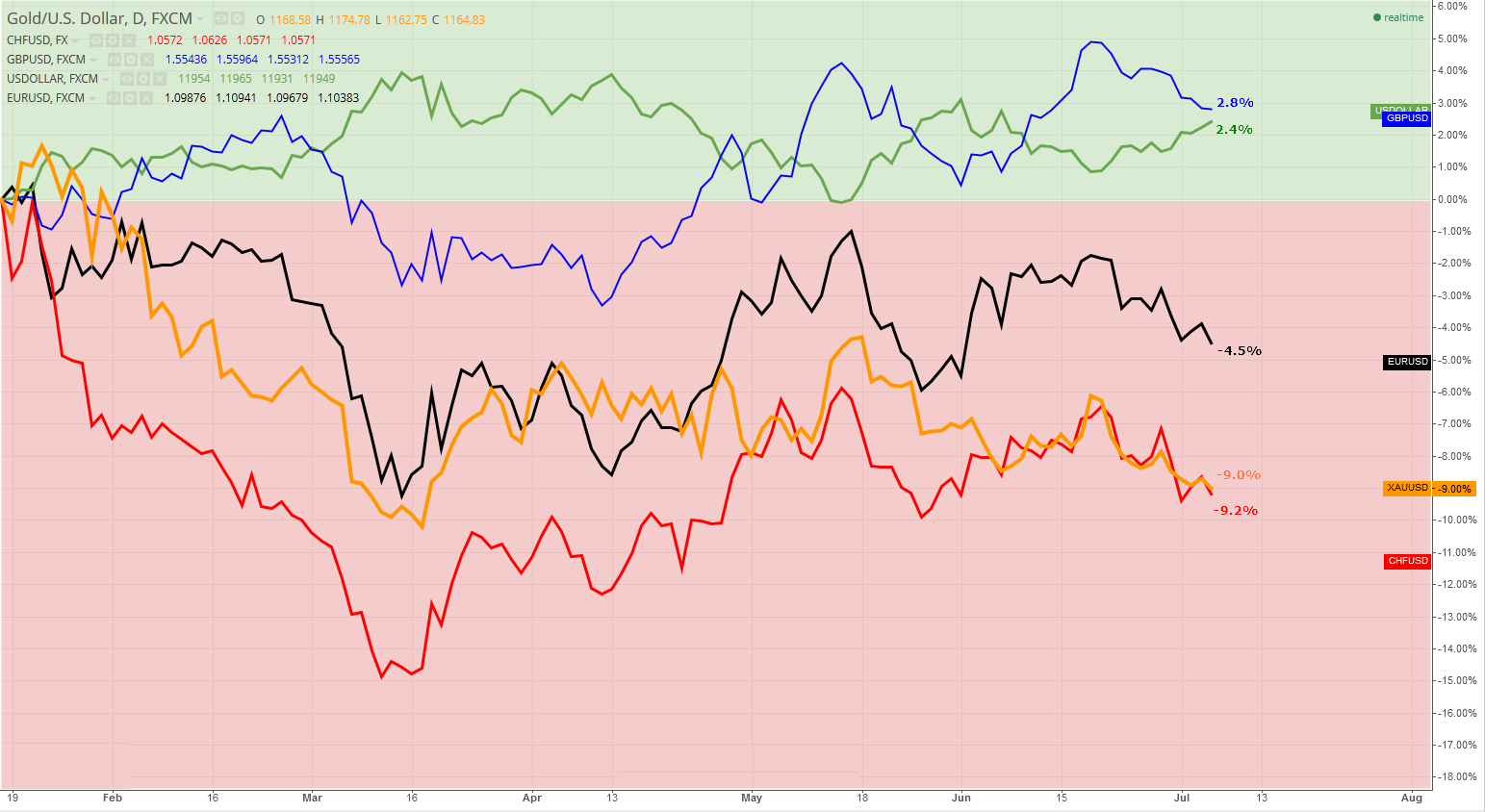 As you can see in the chart above gold, the Swiss franc (inverted cross here, franc is leading currency in this pair) and the euro are in the red territory with gold and the franc having similar negative numbers around -9%, while the euro has lost almost double less compared to them at -4.5%.

Gold's downtrend is less volatile compared to other losers; it is steeper in the first quarter and almost flat in the second. What is more interesting is the trajectory of these three instruments; The CHF and the euro look like clones of each other with the minimally variable gap between them around 5%.

If you would have an abstract look to the chart, you will find striking resemblance of losers trends with Bollinger Bands® indicator. Gold looks like the price line between the upper band (euro) and the lower band (Swiss franc), for me it means similarity of price dynamics of these three assets that vary from time to time. You can see herd behavior by logical investors here: when the SNB pushed the franc, lower investors stepped aside not to be smashed by the power of the Central Bank. And in the last quarter when Greece ignited the turbulence they dropped the euro and jumped into the franc to save their money.

Two currencies are the post-SNB winners: The British Pound and the King currency (US dollar). When I created this chart above I realized at once that the idea why I made this post looks viable as cable (traders' nickname for British Pound) is the winner in this game of survival making 2.8% for its holder who just wanted to save but earned. It is amazing that the pound has succeeded in this restless time as it is the same dollar opposite as gold, the franc and the euro. The simple factor of interest rate differentials plays here the key role; the United Kingdom has the highest rate at 0.5% among reviewed instruments. But I guess independent economic policy, political will and forecasted growth also add significant value to the pound's strength.

The Dollar's strong position is based on the hope that favorable economic prospects will let the Fed lift the rates.

This is just the quick look at the instruments dynamics. We can see the real shift in at least 1-3 years to make the final judgement about the possible new safe haven rival of gold, the latter is still unbeatable in the long run.

One thought on “Year Of Shocks: Which Of The Safe Havens Saved The Most?”