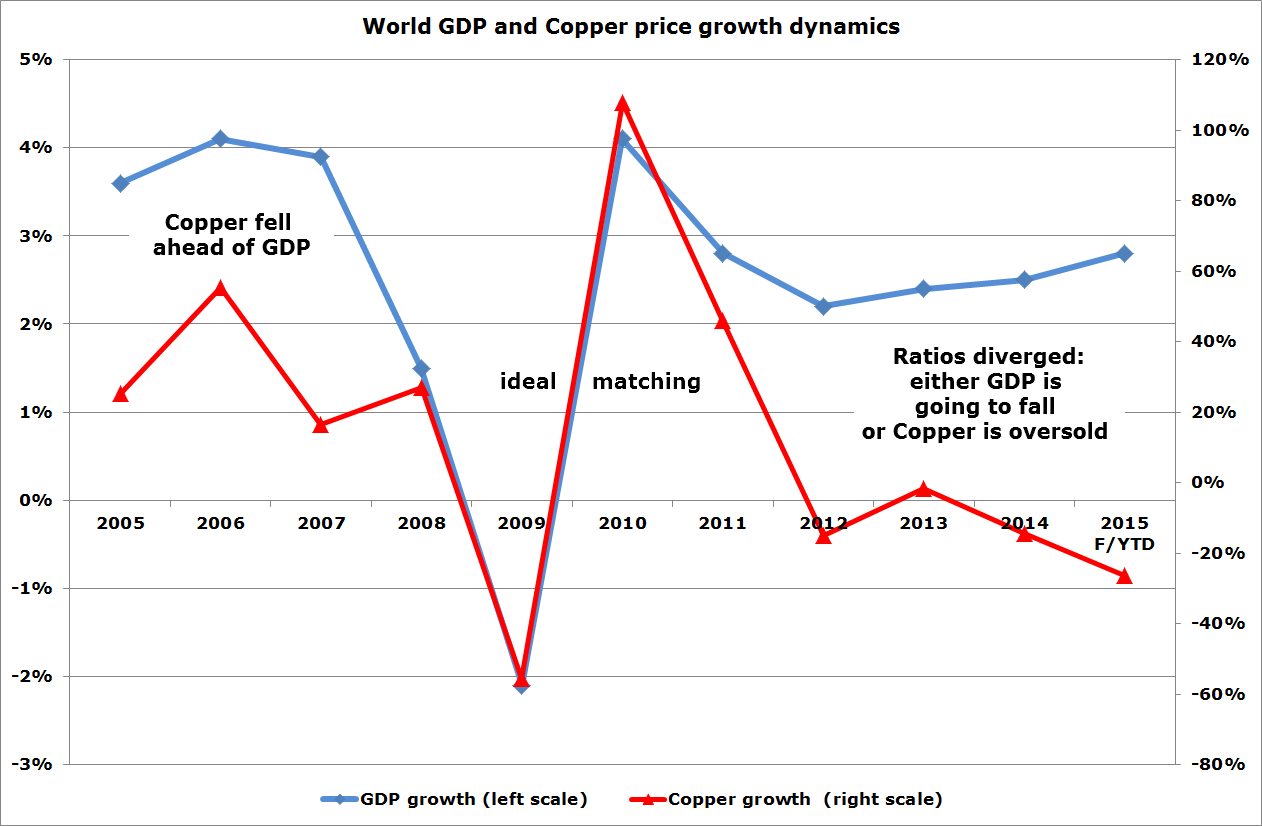 Copper is a core element of our everyday life and it will only grow to be even more important in our digital life as we strive for comfort. The diagram above shows it without saying a word.

The 10-year dynamics of the GDP and Copper growth had the same trajectory, at least until 2014 when the ratios diverged. In 2005-2007 the metal had fallen ahead of the GDP with a steeper curve in 2007 and then both indicators met in the collapse of 2008-2009. And then, amazingly, the ratios proceeded to keep together on the graph showing ideal matching from the bottom to the top in 2010.

Copper was the lone passenger in the seat on the roller coaster of 2010-2012 and the GDP quit the game with a slower pace of downfall amid several rounds of QE and China's flat GDP curve.

The ratios totally diverged last year as GDP growth has been frozen around 2.5% and the metal has continued its slide lower and lower. It's not scientific research, but this simple diagram points to a serious discrepancy: GDP readings continue to show pale, but growth, while the price of Copper is digging for the bottom.

China is at the top of the news cycle recently so it seems the Copper price indicator is working properly. Just governments are throwing out more and more life vests to the global economy by printing money and devaluing printed money which balloons the GDP readings amid a bursting metal price. But I guess an exposure is coming soon.

"The Snake Games": Copper Is The Second Fiddle

In the chart above I want to show you the comparative dynamics of core life elements. The world needs energy (oil) to go on and the conductor of our thoughts in this digital world and the basis of more and more comfort (Copper).

The graph looks like the chart of two moving averages of similar periods which cross each other signaling regular reversal, so resembling is the trajectory of both Copper and oil. Another analogy is the snake games where the dominant male snake (oil, black line) leads the female snake (Copper, red line).

Copper tends to inflate bubbles over oil's trend as it usually starts in the second position, but then catches up with oil and passes ahead, but only in upside swings. In 2008 there was full trend coincidence of these commodities as it was crisis driven total selloff and Copper sank less than oil, but the latter was the first to reverse the trend later the same year.

As a whole, Copper looks to be driven by oil swings, the last example was the wild oil price collapse in June 2014, the metal has sluggishly followed oil the next month. There is still a big gap between them and Copper lags behind.

As Copper is the economy's health indicator, then oil is its monitor. So to track both Copper and global GDP trends we should watch the oil price development closely. Oil had already signaled reversal at the end of 2008, and we can have another chance of early signs this time again. But don't try to catch the falling knife, be patient, and let it confirm the reversal above $50.