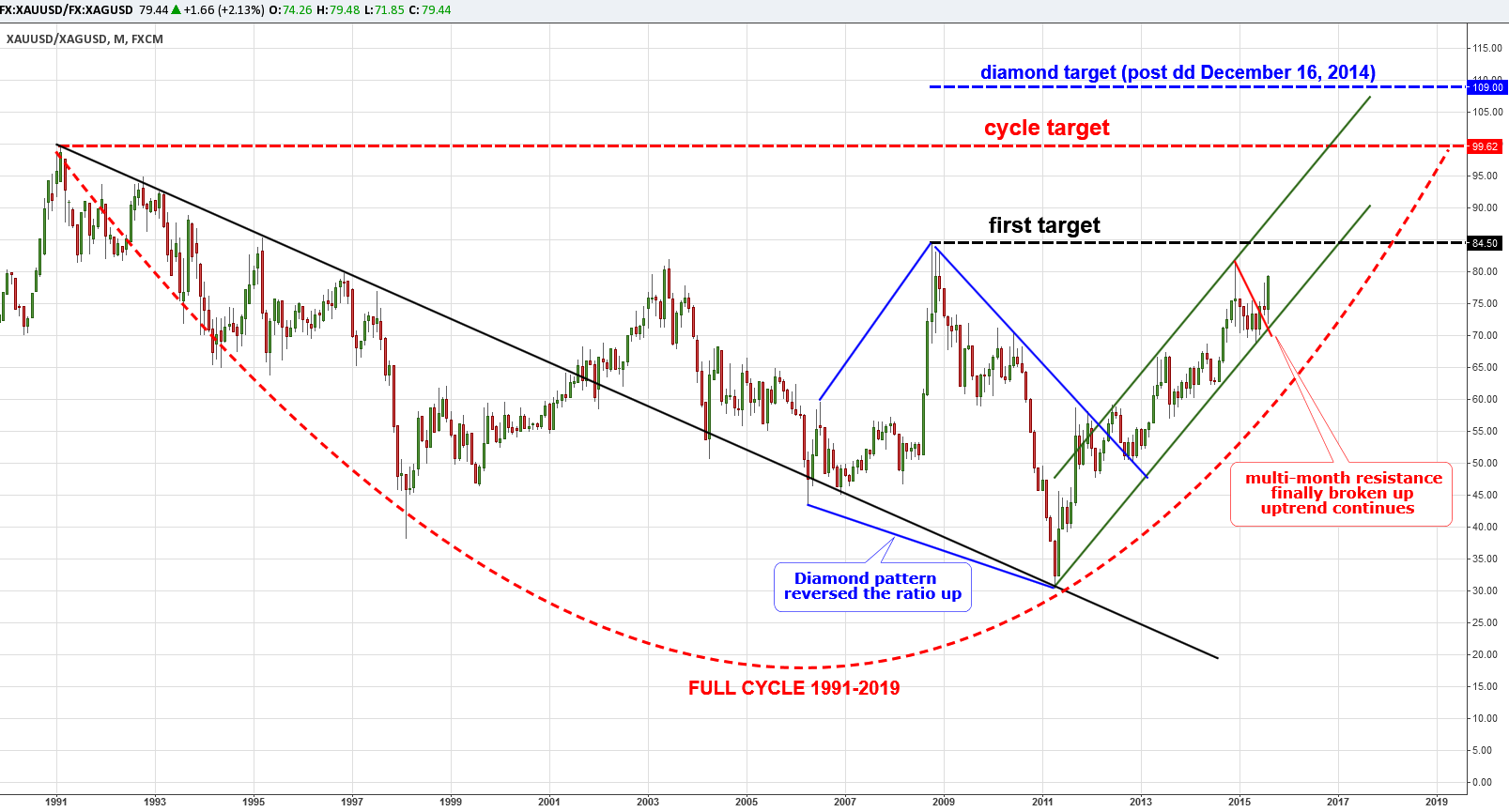 Last December I had written my first post with quite an ambitious target for this ratio at the 109oz level as a possible outcome of a very rare diamond reversal pattern (highlighted in blue lines and the target is highlighted in blue horizontal dashed line). At that time the ratio was at the 72oz level and it has advanced 11% now to the 80oz level.

As seen in the above chart, the breakthrough occurred this month. Before that the Gold/Silver ratio languished in the captivity of the 68-76oz range. In my previous post, the break of the wedge pattern's upside resistance at the 76oz level has been highlighted (red vertical line on the chart) and as we see once the breach happened, the ratio quickly reached the 80oz area. The first target is located at the previous high that occurred in 2008 at the 84.50oz level and it also coincides with the wedge pattern target at the 84oz level.

The Gold/Silver ratio had started to collapse in 1991 from its peak of almost the 100oz level. Three bottoms had been made around the 40, 45 and 30oz levels before it finally reversed up by the diamond pattern in 2012. The red dashed curved line shows the trajectory of the cycle which should reach the initial point level at 100oz to finish it.

We have three bullish targets for the ratio and the last thing to outline is the first support to watch which is located at the previous range and the uptrend downside at the 68oz level.

The Gold/Platinum ratio is further proof of Gold's dominance over industrial metals. It's almost the same upside picture on the chart above, but with a longer unfolding period.

The ratio started its downfall 9 years ahead of the Gold/Silver coefficient in 1982 from the sky-high level of 1.46 and the collapse was much more severe than against Silver. I think the main driver was the robust automobile industry development with the higher living standards around the globe which spurred a massive demand for Platinum catalysts as ecology started to head up.

The downtrend had been broken up ruthlessly amid financial crisis when auto-catalyst demand had fallen dramatically bringing the Gold/Platinum ratio to parity at the end of 2008. This very ratio shows that things haven’t become any better, safe haven demand over Platinum has come back with more power after a correction to the 0.65oz level in 2010 and it has sent the ratio to a new maximum beyond the parity at the 1.16 mark.

The Gold/Platinum ratio is very nimble, after reaching a new maximum the ratio made a downward swing to the lower side of a multi-decade uptrend (highlighted in green) reflecting the small inner cycles of the world economy.

Last year quite a deep correction happened below the parity to the 0.85 level, after that, the Gold/Platinum ratio hit the previous peak touching the 1.17oz level. Ahead, we have the last "door" to open; it is a peak from 1985 at the 1.26 oz level before we finish the full cycle at 1.46oz. It is quite possible that reaching the upside of the trend at the 1.30 level will make the corrective move down just below the parity before the ultimate target for the ratio will be hit.

Both graphs show us a clear picture of the market preference; it is again Gold (same as in the case of oil, stocks and currencies).

14 thoughts on “Gold Ratios: Gold Is A Top Killer When You Need Safety”