It's hard to believe how quickly this summer has passed, but here we are already in August.

Traditionally August is the hottest month of the year, but the question is, will the markets get hot in August and start moving up? 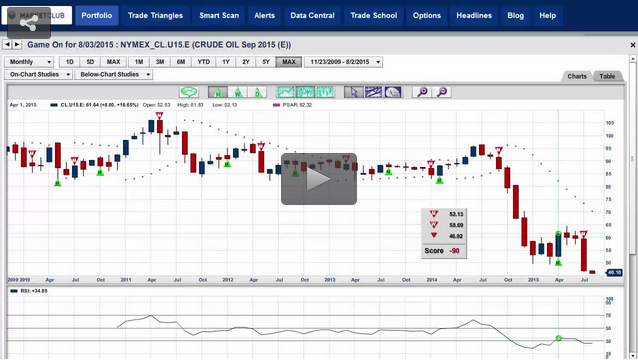 Let's take a look at what happened in July to find out which markets put smiles on investors' faces and which markets led some investors to the poor house.

The biggest loser last month in the major market category is crude oil, which lost an astounding 21.2% for the month of July. The next biggest loser was gold, which must have put a shudder in the spines of the gold bugs (do bugs have spines?).

The euro, while it lost ground, was nothing compared to the other two markets with a mere loss of 1.4%. All three of these markets did nothing to put a smile on investors faces unless they were either short or you had puts in the options market.

The markets that did put smiles on investors faces were the three major indices, the DOW, S&P 500 and NASDAQ. The clear winner in this category was the NASDAQ which was up 2.8% for the month of July. This index was followed by the S&P 500 which managed to knock out a very respectable 2% gain for the month. Trailing both the NASDAQ and S&P 500 was the DOW, which managed to eke out a meager gain of 0.4%.

Now the question becomes, what's going to happen in the month of August? Is it going to be a positive or negative month for these markets?

To help you better identify which way the markets are moving and trending, you may want to take a look at these two studies that I believe will help you.

The first study is the MACD indicator. This indicator was developed by Gerald Appel in the 70's. What I like about this indicator is that it has stood the test of time and is very good at spotting developing trends.

The next indicator is one that I like and that is the RSI indicator.

Before you check out those indicators, you may want to look at today's video. I will be looking at all of the markets and sharing with you what MarketClub's proprietary Trade Triangles are doing and what the other indicators are also saying.

For everyone who commented on our blog last month, we thank you. We sincerely appreciate your valued input and feedback on the markets.

August promises to be a hot month!