This morning's newswires are filled with stories of yet another dramatic intervention by China in the Yuan exchange rate. This time, though, it's in favor of the Yuan. That news, more than any, has investors alarmed as it seems to suggest that China has lost control. To that, I say how can you lose something you never had?

China and its financial authorities, namely the Peoples Bank of China, are viewed as the effective forces controlling the Chinese money market. That means not just the currency but also the financial markets and inflation. Hence, the state of alarm currently dominating markets makes sense. But the fact is that China never really had the control that investors believed it had. Because simultaneously controlling monetary policy and the currency is like "trying to hold the stick at both ends;" it's just not possible.

As seen in the historical data below which compares the Yuan exchange rate vs. inflation it becomes clear. In the past two decades, China has "controlled" the Yuan by capping its strength, of course, in order to make its exports more competitive. But as you can readily see, while China controlled the Yuan exchange rate, inflation has been a roller coaster. It has been jumping and collapsing at staggering levels, way off the charts. Chinese inflation ran from lower than 0% to higher than 8% Those levels are more in tandem with a frontier market and far off what any reputable central bank should deem as normal. That is another way of saying that China had no control of monetary policy and inflation was way above normal levels.

Today's turmoil is the exact opposite. From the above chart, we can see that China's recent inflation levels had been rather stable, in the range of 1-2%. That suggests that the Peoples Bank of China is in control of monetary policy, perhaps even more so than some if its Western peers. In the meanwhile, what's happening to the Yuan?

In the chart below, courtesy of the Hong Kong Exchange, the Yuan's implied volatility is off the charts. A sign of how China has now switched from sacrificing monetary policy to sacrificing stability in the Yuan. 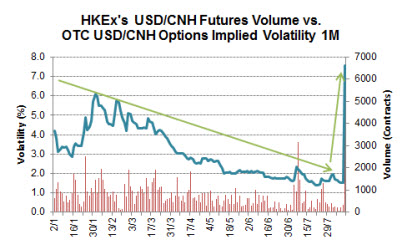 How does this all narrow down to China's policy? As I have discussed previously, there is a need for the Yuan to devalue further in order to stabilize Chinese exports and ease pressures in the Chinese economy. Although this may alarm investors, if China moves to soften the Yuan even slightly it could provide some relief to the economy. That could enable its transition toward a more modern monetary system with stable inflation perhaps a bit smoother. The Yuan devaluation may be the only sensible move for China. That said it's not clear whether China can make it safely back to the other side and have a free exchange rate.

One thought on “Has China Lost Control?”