The culmination of extraneous events such as sustained lower oil prices, an ostensibly imminent rate hike and weakness in China have indiscriminately plummeted the biotech sector as of late. Now a second and more specific wave of sector related stories such as price gouging by Turing Pharmaceuticals and the subsequent comments by Hillary Clinton have exacerbated this sector decline. These former events are seemingly unrelated to the biotechnology sector, yet this group has been taken along for the downhill ride with the broader indices in lock-step. The latter events have been detrimental to all biotechnology stocks as this is a direct threat to pricing power and our capitalism based structure.

The unprecedented secular growth streak in biotech has been more than tested as of late with biotechnology officially in bear territory. These latest events, some unrelated and others directly related to the biotech sector, may provide a unique opportunity to add to a current position or initiate a position over time as this correction continues to unfold. Based on annual and cumulative performance throughout both bear and bull markets, The iShares Nasdaq Biotechnology (ticker symbol: IBB) may provide the opportunity investors have been waiting for in the face of our current market conditions. IBB is down 25% from its 52-week high, shares have plunged from $400 to $295 per share during the recent market weakness, presenting a potential buying opportunity.

Recently, Turing Pharmaceuticals and its CEO Martin Shkreli garnered criticism after the company boosted the price of Daraprim from $13.50 to $750 per pill, resulting in a greater than 5,400% increase after acquiring the drug in August. This price gouging of a decades’ old drug drew fire from the general public on social media and, in particular, the presidential candidate and Democratic front-runner Hillary Clinton (Figure 1).

This price gouging incident has elicited widespread backlash, and in my opinion rightfully so, however this criticism has been unfairly painted across the entire sector. It’s noteworthy to point out that Democratic lawmakers have requested pricing policies and further information on pricing of drugs by Canadian drug maker Valeant Pharmaceuticals. Despite the public backlash and public statements by lawmakers, I believe this is a temporary headwind rooted in the public relations arena.

Although the aforementioned example of Daraprim is an isolated and extreme example, at the end of the day, these companies are in business to make a profit and return value to shareholders. Attempts to heavily regulate the sector with government intervention will likely end in a futile effort in arresting drug price increases. Companies spend billions of dollars and years of research and development costs to bring a therapy to the market. These costs must be factored into the pricing of the product in order for the company to remain in business and continue to advance efforts to provide more options to patients. Many contend that these prices are not sustainable, and the cost to the overall healthcare system is a huge financial burden. Qualitatively this is true, however this situation draws parallels to the housing market, education costs, and social security. All of these areas of our economy are facing similar fates with unsustainable financial barriers to enter and unfunded liabilities. Unlike education costs, housing price increases and social security, drug pricing is negotiated with many insures and organizations that dispense drugs at a substantial discount to the market price and often along with rebate programs. Drug companies must also capitalize on their window of exclusivity to the drug. Depending in patent expiration, after varying time on the market patents will inevitably expire, and these drugs will no longer possess exclusivity and face generic competition. Taken together in concert with the fact that the Affordable Care Act (ACA) is now law of the land, no one will be paying the market price of any drug since the annual deductible and maximum out-of-pocket is established per policy.

An often overlooked benefit is the cost savings to the overall healthcare system. This occurs when curative drugs or drugs that increase the overall survival and/or improve the quality of life are introduced to the market. These highly effective drugs can effectively remove patients from the system whereby eliminating years of high-cost medical treatment and hospitalization. While drug prices continue to rise, there's substantial rational in the form of input costs, loss of exclusivity, curative treatments, increase in quality of life and removal of some patients from the overall healthcare system thus reducing the overall cost burden of the given healthcare system.

Despite the headwinds outlined above, the biotech sector has exhibited its resilience in both bear and bull markets with secular growth over the past decade. The returns for IBB have been very impressive in both annual and cumulative performance, unparalleled by any major index. Over the past 10 and 5 year timeframes, IBB has posted cumulative returns of over 310% and 265%, respectively. These results are unrivaled by any major index, outperforming on a 10-year cumulative basis by 3-fold or greater when compared to the S&P 500, Nasdaq, and Dow Jones (Figure 2). These returns are accentuated during the previous 5 years. IBB notched cumulative returns of 265%, outperforming the S&P 500, Nasdaq and Dow Jones by roughly 2.5-fold or greater over this 5-year time frame (Figure 3). 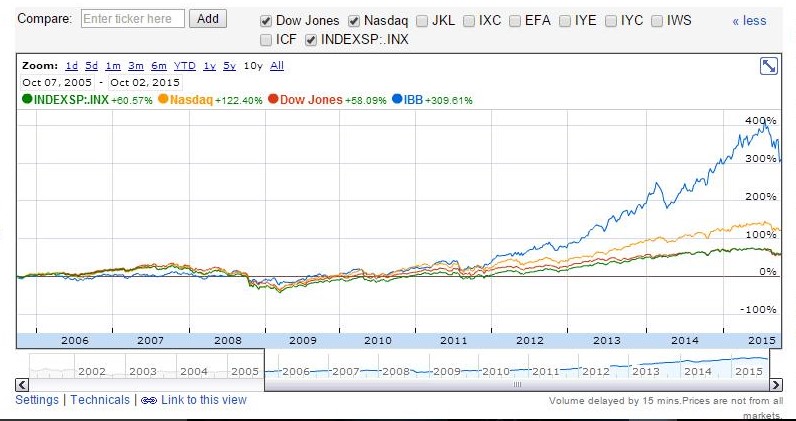 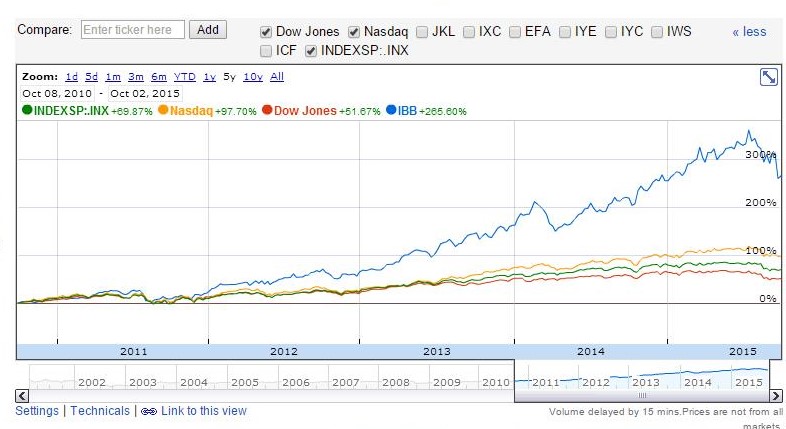 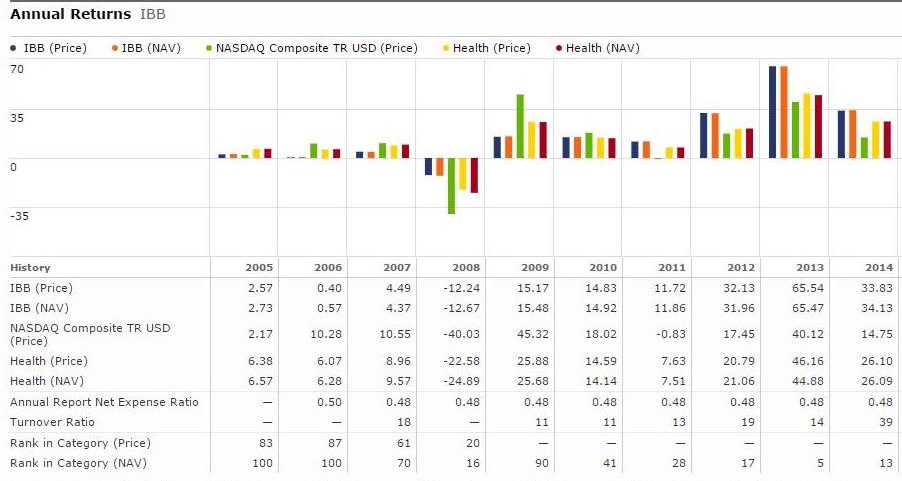 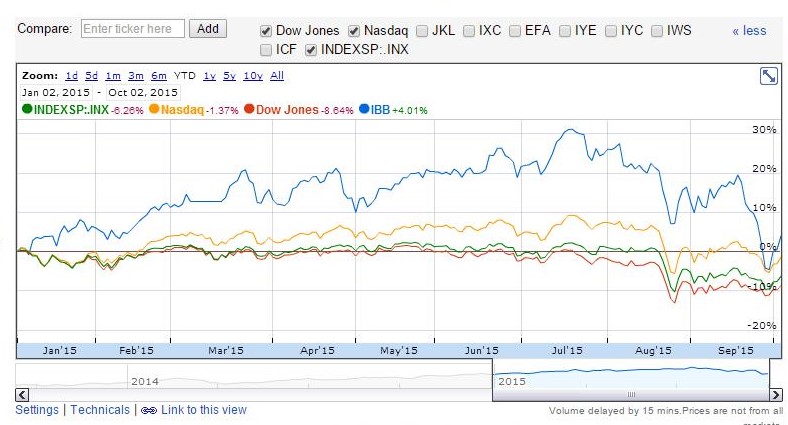 As the confluence of broader disconnected factors and price gouging inquiries by leading politicians continue to bring down the biotechnology sector, it may be time to consider capitalizing on this correction via adding to existing positions or initiating a new position in this cohort given this opportunity. As the United States continues to absorb an aging population alongside growing overall healthcare costs, more specifically prescription drug costs, the biotech sector looks poised to benefit and continue to outperform the broader market. Data suggests, provided a long-term position that volatility within the biotech sector is negated by its long-term performance that is unparalleled by any major index. This sector provides high returns unrivaled by any major index with moderate risk (based on its resilience during the bear markets of 2008 and 2011 and thus far in 2015) and volatility. IBB may be providing investors with a great opportunity to add or initiate a position for any long portfolio desiring exposure to the biotechnology sector with a long-term time horizon given the recent market conditions.

Disclosure: The author currently holds shares of IBB and is long IBB. The author has no business relationship with any companies mentioned in this article. He is not a professional financial advisor or tax professional. This article reflects his own opinions. This article is not intended to be a recommendation to buy or sell any stock or ETF mentioned. Kiedrowski is an individual investor who analyzes investment strategies and disseminates analyses. Kiedrowski encourages all investors to conduct their own research and due diligence prior to investing. Please feel free to comment and provide feedback, the author values all responses.