Wall Street is a fickle environment that often focuses on hot new growth plays prioritizing chasing the next big thing to replace already established names like Apple or Google. "Sexy" investments like technology companies and niche industries may capture the headlines, but experienced investors know that consistency is the key to long-term success in the stock market.

Businesses don't need to be involved in the latest trends or the hottest new emerging market in order to make outstanding profits. There are plenty of industries with stable growth prospects that are engaged in mundane services and easily overlooked.

The waste and recycling management industry fits the definition of an "unsexy" investment perfectly. It's not a glamorous business on the surface, but looks can be deceiving. Thanks to a heavy push for green initiatives, this industry has been reinventing itself over the past decade and could offer investors an opportunity for higher gains.

There's a high barrier to entry in this field with a limited number of service providers making it somewhat of an oligarchy – companies that are already established face little outside competition or disruption. As the global population builds, newer and better means of waste disposal and recycling will be a critical component for worldwide growth. That makes waste management an industry with strong future growth prospects and high demand.

A staple in waste management services with the innovation to succeed

Waste Management (WM) is a $24 billion waste services company with operations in the US and Canada. The company estimates that it will manage around 20 million tons of recyclable material by 2020 – a 25% increase from today's figures. It also oversees 134 landfill gas projects with its renewable energy services segment.

The company is a leader in the industry and has taken steps to ensure its dominance through the recent acquisition of Deffenbaugh Disposal, which was completed last quarter. Waste Management will report earnings in the next couple of weeks and should announce a share repurchase program to help return shareholder value as well.

A look at this stock's chart reveals a lot of positive things going for it right now. 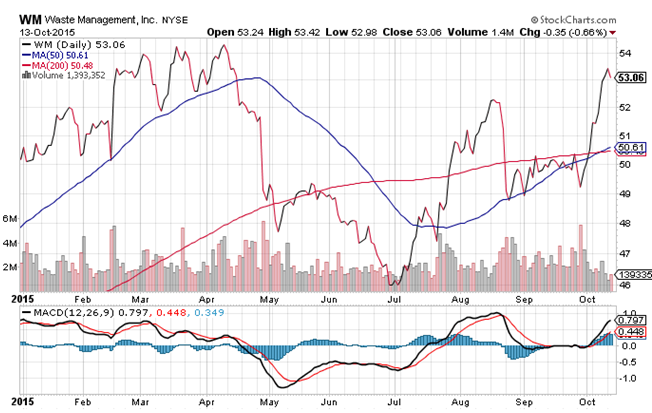 First, notice how the 50-day moving average crossed over the 200-day moving average just last week – a strong bullish signal that the stock could be moving higher. Momentum is also starting to build up in the stock as registered by the very positive MACD. The stock jumped higher in late September/ early October along with unusually high volume as well which is another strong bullish signal for the stock.

The company has done well growing earnings with the last miss back in the fourth quarter of 2013. The stock trades at a discount of 20.8 times earnings which is lower than the industry average of 29.1. The company's net profit margin of 8.26% is higher than its competitors while net operating cash flow increased 47% from the same quarter last year. Net income growth is also higher than its peers growing more than 30% from the same quarter last year.

Given full year earnings estimates, this stock should be fairly valued at around $63 per share – more than 18% higher than its current price. Any upside surprise in earnings when the company reports later this month should be a catalyst for the stock to move higher making now an ideal time to buy while it's still undervalued.