This week is expected to be a choppy one for the Pound Sterling. On Thursday, the Bank of England is set to publish its quarterly Inflation Report alongside the BoE rate decision. FX investors want to see if, afterward, a more hawkish picture emerges. If that’s the case, Sterling could quickly move higher against its battered peer, the Euro.

What to Watch for in the Inflation Report

Essentially, there are three different points worth watching in next week’s Inflation Report.

• The first are global risks. In August’s Inflation Report, the BoE warned of downside risks to inflation from global weakness. Yet after the Fed dropped its own warning on global risks, the BoE may follow suit. That will, of course, be the first hawkish sign.

• The second would be the risk of imported inflation or, in this case, disinflation. The BoE has justifiably warned of the consequences of a weak Euro. Many UK imports come from the Eurozone, and the Eurozone is a key export destination. Thus, a weak Euro weighs on UK inflation by lowering prices of goods within the UK. If the Bank sees this risk as more muted, that’s a positive sign. Although with chances of additional ECB stimulus increasing it’s hard to see a change to this segment.

• The third would be inflation expectations. Of course, it all does eventually narrow down to inflation expectations. In its past report, the BoE had expected downward inflationary pressures would gradually recede in the second half of the year. Is this scenario still intact? If, over the past quarter the BoE still sees the risk of deflation diminishing, that’s another hawkish arrow. It’s also another sign that the BoE, although at a somewhat slow pace, is moving toward high rates.

Reasons to be Upbeat

Generally, markets are optimistic on the chances of UK inflation stabilizing and the BoE turning more hawkish. The reason is the dissonance between wage gains and inflation. The chart shows that core inflation (which neutralizes seasonal and external factors) has lagged wage growth. Meanwhile, UK retail sales growth has remained robust, growing at 6.5%. This suggests that Britons are earning more and spending more. That, eventually, has to translate into higher inflation.

Sterling Play vs. the Euro

My analysis focuses primarily on Sterling strength against the Euro and not the US dollar. That’s because divergence in monetary policy in the Eurozone vs. the Bank of England is clearer. Consider, the moment the Euro gains against Sterling, UK imports become more expensive. With that, inflation edges higher, and rate hikes move closer. Thus, Euro gains are limited against the Pound Sterling.

Meanwhile, let’s also consider a slightly more hawkish BoE compared with an ECB on the cusp of printing more Euros. That, of course, is highly positive for Sterling vs. the Euro. From a risk/reward perspective, shorting the EUR/GBP makes a lot of sense. Especially, if you take fundamentals into account and given a potentially more hawkish BoE.
On the other hand, the Dollar’s monetary outlook is a bit more hawkish. Any disappointment from the BoE could have a strong backlash on a GBP/USD long. That is given that a US rate hike in the coming months seems almost certain.

Mid-term target: Using Fibonacci expansion lines to get an estimate of the pair’s next bearish target, the 0.627 seems the likely mid-term target. Let’s consider the growing likelihood that the EUR/USD will hit parity. Also, consider expectations that GBP/USD will slide to 1.5. Then we can pin down the long-term target at 1.5 Euros per Sterling. In reverse, that means 0.66, which seems like the most likely long-term trajectory for the pair. 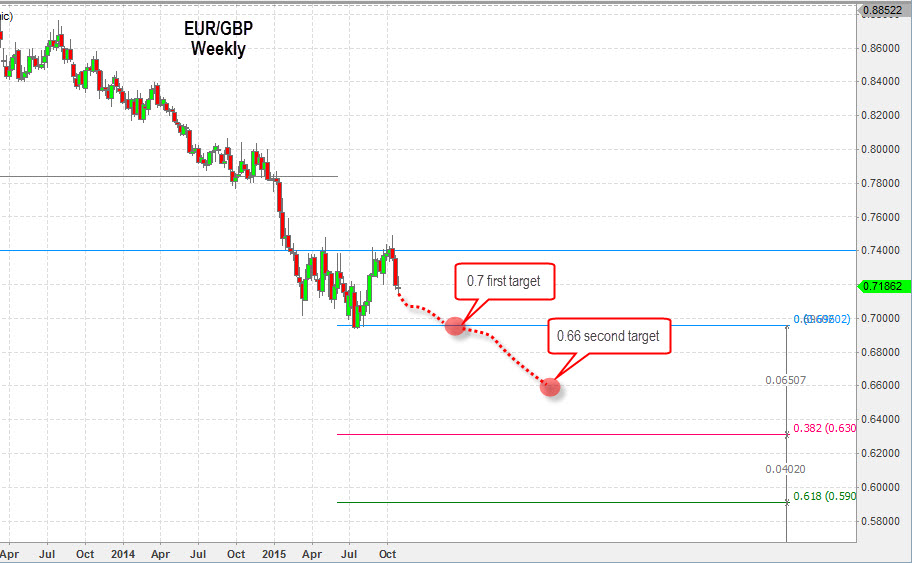