Value investors love finding a small cap stock that's outperforming while flying under the radar. Wall Street analysts tend to focus on larger companies which means their smaller counterparts can often be mispriced – a scenario that value hunters live for.

Finding an undervalued stock in an industry that's growing fast as well is like having your cake and eating it too.

The US hosts the largest medical supplies market in the world valued at around $110 billion and expected to reach $133 billion by next year. The US constituted 38% of the worldwide medical equipment market (as of 2012) and exports are expected to rise over the next several years even in the face of a challenging environment driven by the high relative value of the dollar.

The medical device industry is also a good defense play for investors worried about a possible recession or bear market that's been threatening for 2016. Healthcare and healthcare supplies are great for down markets because they are an essential good and service that doesn't diminish during an economic contraction.

One small cap player in the medical device space has been on a tear recently with its stock price leaping nearly 10% in one month. It's recent earnings beat and uplifted guidance going forward makes this company a winner in an industry that's already strong.

Value and growth in one small cap stock

Owens & Minor Inc. (NYSE:OMI) is a $2.4 billion small cap medical device wholesaler with 55 distribution centers and currently servicing more than 4,500 hospitals and other healthcare facilities. The company distributes a diverse array of medical goods and equipment ranging from disposable gloves, dressings, needles and syringes to urological and wound-closure products.

The company reported an earnings beat in October that surprised analysts. Owens & Minor showed a profit of $0.54 per share versus the $.047 that previous estimates indicated. Full year earnings are expected to be in the $1.85 to $1.95 per share range as well. The beat helped lift the stock up more than 10% following the release with improving investor sentiment. 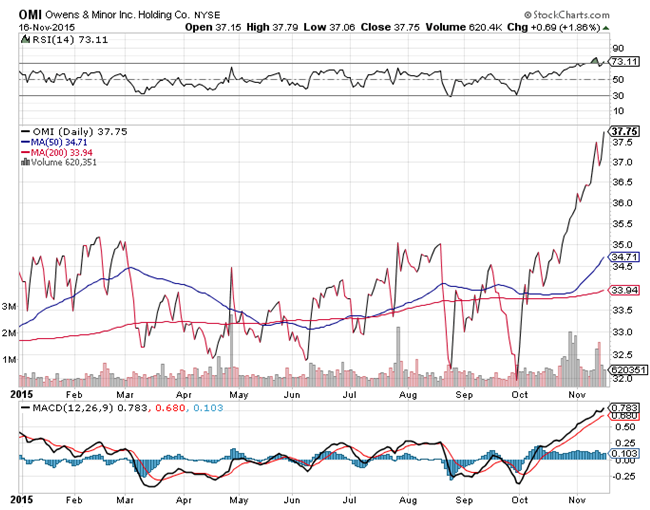 The first thing you'll likely notice is the sharp uptick in the stock since October. The movement is associated with a divergence in the 50-day and 200-day moving average as well as positive MACD – all signs of strong momentum. The stock could be overbought though judging by it's relatively high RSI of 73.11. However, very strong momentum could override the overbought signal making undervalued even after its recent rise. The stock also hit a new 52-week recently which is usually a strong bullish signal that it will continue to rise.

One overlooked benefit of this stock is the relatively high dividend yield of about 2.7%. That gives it additional defensive capabilities other than the industry it operates in making it an all around attractive stock to pick up right now.

Based on its P/E and improved guidance, this stock could be worth around $44 per share – a potential gain of 16.5%.