Recent data on oil prices and energy equities is painting a picture few seem to appreciate. Here are 5 under-appreciated nuggets of information that generally seem to favor a rebound in oil prices and oil companies’ stocks. At the end, I offer one significant counterpoint.

Fact #1: Growing demand: Media outlets seem to continue wondering whether global demand for oil has increased with today’s lower prices. The answer, of course, is a definite yes.

I listened a couple weeks ago to a presentation by a portfolio manager of the Guinness Atkinson Global Energy Fund (GAGEX), Jonathan Waghorn (who co-manages the fund along with Tim Guinness and Will Riley). I’ll reference information and charts from Mr. Waghorn’s presentation throughout this article. 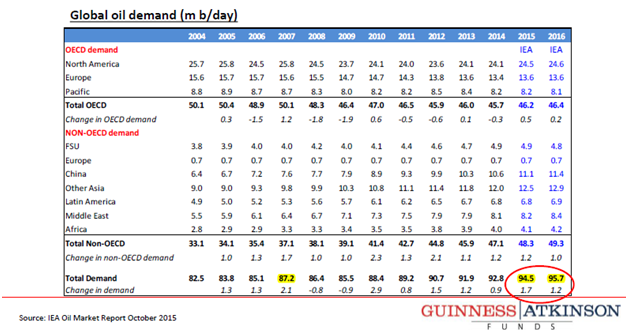 Fact #2: Falling capex (a harbinger of future supply): We all know oil producers have continued producing, despite drastic, well documented reductions in rig count. But have drillers cut back their capital expenditures (CapEx)? Waghorn’s data show the answer is a resounding yes! Says Waghorn:

Waghorn further points out the compounded 3-year forecasted decline of 40-45% compares to a mere 15-20% fall in upstream CapEx in the last oil crash of 2008.

Beyond that, I’ll chime in that if JP Morgan made those calculations based on $60/bbl, one could presume CapEx will be even lower with oil at or below $50/bbl. Right now, crude is closer to $40 and has been unable to sustain prices over $50/bbl since mid-July. However you slice it, oil suppliers have cut way back. They may have the ability to ramp up production quickly, to some extent, but at some point, more capex will be required, and may not come quickly enough to keep oil prices down.

Fact #3: Brazil supply has fallen off: Cuts in the non-OPEC country of Brazil will “have substantial effect,” according to Waghorn. Brazil’s state-controlled oil company, known as Petrobras, “just doesn’t have the cash flow” to continue producing 5.3 mb/day. Its 2020 forecast is now 3.7 mb/day, and the concern has shelved some major development projects.

Fact #4: Energy equities vs. the world: Remember the “grand oil supercycle” thesis that produced such eye-popping gains in energy equities beginning in 2000? It ended in 2008.

Guinness points out the MSCI World Energy Index has underperformed the MSCI World Equity Index for 87 months (well over 7 years), and that this stretch represents the longest such period of underperformance since at least 1980. Today’s relative energy stock prices are back to 2004 levels, as you can see in Waghorn’s chart below.

Now, we should acknowledge trends don’t just end simply because of age; but all trends reverse eventually. Make no mistake, energy stocks’ relative underperformance has been going on for several years already. No one knows how long this might continue, but you can no longer say we’re in the early innings.

Waghorn further points out energy stocks’ valuations compared to the S&P 500 are at extremes and similar measurements in 1986 and 1998 pre-saged periods of energy stocks outperformance.

Fact #5: Wells deplete: This fact is not new, but according to WHV International Senior Portfolio Manager Richard Hirayama, the oil industry must generally increase its resources by 5% per year just to keep up with demand. About 4% of the 5% increase is required, according to Hirayama, merely to replace depletion. The other 1% is to meet demand growth. Hirayama calls that 5% hurdle a challenging one for the industry. It means by 2020; he said, the energy industry will need to find about 30 million bbl/day of new growth supplies, based on today’s production of about 97 million barrels per day.

Counterpoint: Waghorn asserts, based on Guinness Atkinson’s analysis, US onshore producers in the lower 48 states have increased production by about 4.0 mb/d over the last 4 years (from about 3.5 mb/d to about 7.5); and further growth of about 2-3 mb/d is possible over the 3-5 years (but dependent, of course, on having high enough oil prices to allow investment). The potential for more new supply is still powerful! What a revolution toward energy independence this has been!!

Disclosure: At the time of post publication, this contributor did not own any other stock mentioned. This article is the opinion of the contributor themselves. The above is a matter of opinion provided for general information purposes only and is not intended as investment advice. This contributor is not receiving compensation (other than from INO.com) for their opinion.