You read that headline correctly. Don't look now (you might jinx it), but Chevron Corporation (NYSE:CVX), the large integrated oil major, now sports green monthly and weekly Trade Triangles on its MarketClub chart. And this with oil at $35 per barrel.

CVX is now down just 12.9% for 2015 year-to-date (YTD) when including dividends. On a 3-year annualized basis, CVX shares have lost 0.6% annualized, and on a 5-year basis, the number is +4.77% per year. All those performance numbers are on par with Exxon Mobil Corp. (NYSE:XOM) and other integrated oil majors. You could safely say it's been a wild ride for all of them.

But what are the prospects for this mainstay of an oil company, which has paid dividends to shareholders since 1912, including 28 straight years of dividends increases?

Let's start right there – with a discussion of CVX's dividend.

Even based on today's price, CVX's projected yield is about 4.6%. Not bad, for starters. However, be advised…

The company did not earn enough to pay its dividend in 2015 and doesn't expect to do so in 2016. Rather than cutting its payout, though, CVX is borrowing, divesting assets, cutting costs, and taking other measures to maintain and increase the dividend for another year, through 2016. From there, CVX management has set 1 simple organizational goal: to once again cover the dividend with cash flow from operations in the fiscal year 2017. S&P Capital IQ's analyst, S. Glickman, CFA, calls CVX's goal "challenging." But CVX expresses continued commitment to the goal. After all, "we're a nation of doers," right? (This has been an unpaid advertisement for CVX).

CVX announced its 2017 goal to earn its dividend back in March 2015. In the company’s most recent (October 30th) earnings call, CEO John Watson boldly reiterated the target, even though (as Watson acknowledged) 2017 oil futures prices had continued to significantly deteriorate since his March proclamation.

"Our intent remains the same," said Watson. "Our goal is to balance our cash equation by completing projects under construction and reducing capital spend and operating expenses to levels consistent with current market conditions. We will also continue to divest assets where we can obtain good value."

Remember the "nation of doers"? Get it done, John.

In order to pursue its singular goal to earn the dividend in 2017, CVX management has laid out 5 focuses, including 3 related to controlling expenses, 1 related to increasing revenue, and 1 related to divesting assets. Those 5 focuses are as follows:

Part of CVX's aggressive cost-cutting initiative includes laying off about 6,000 – 7,000 employees (about 8-9% of its workforce), plus "a similar number of contractor reductions." Other cost cuts include supply chain negotiations, efficiency reviews, etc.

Watson's presentation includes a slide using October data from WoodMacKenzie, which compares global oil demand to supply. As we all now know, supply started to significantly outstrip demand in 2014 and continues to do so. Looking ahead to WoodMac's mid-2016 forecasts leads Watson to say, "Markets will likely rebalance at some point next year." 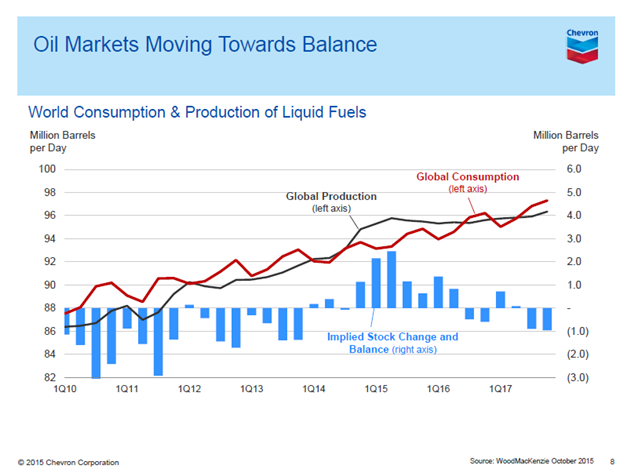 Watson sums up his thoughts this way:

"We are taking significant action to balance the cash equations and cover the dividend with free cash flow by 2017. We expect to deliver volume growth and emerge on the other side of this downturn leaner and better. All of our actions are geared toward delivering value through dividend growth and stock price appreciation."

Wednesday's news included reports Bloomberg and other outlets of a court decision in Chevron's favor in its two-decades-long case stemming from alleged rainforest pollution in Ecuador. While a milestone in the case, this recent news is not the end, however.

Bloomberg quotes Chevron's general counsel as saying "the international scheme against Chevron continues to erode." The opposition, of course, continues to have other ideas and is set to pursue damages in a Canadian court.

Back to business, Barron's reported an analyst upgrade Wednesday. In his report, analyst John Eade from Argus is quoted as saying, "The company expects to reclaim its position as the number-one upstream super-major in terms of production growth and per-barrel profitability."

Number one in production growth, number one in per-barrel profitability, and a laser focus cash-flowing its 4.6% dividend in FY 2017. Those are the positives for Chevron in the midst of today’s most challenging environment.

Disclosure: At the time of post publication, this contributor did not own any stock mentioned in this article. This article is the opinion of the contributor themselves. The above is a matter of opinion provided for general information purposes only and is not intended as investment advice. This contributor is not receiving compensation (other than from INO.com) for their opinion.